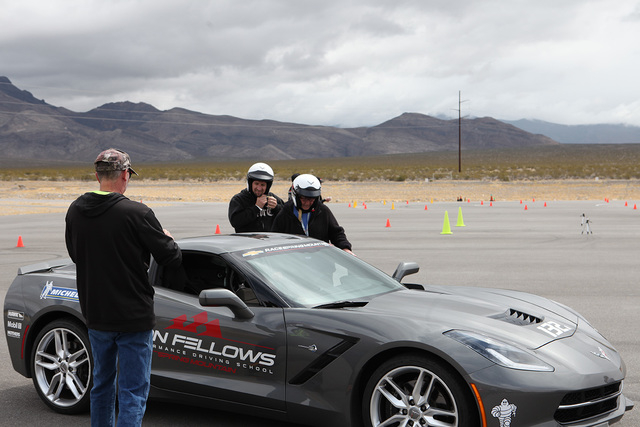 Spring Mountain Motor Resort and Country Club was the venue of a showdown between Pahrump law enforcement and first responders on Saturday.

The event served as a fundraiser for area organizations and agencies.

Spring Mountain Resort General Manager David Petrie said they wanted to do something that would allow the first responders to have a good time and give back to the community.

“As we have grown, the sheriff’s office and fire department have always been there for us in our time of need and we wanted to do something to show our appreciation to them and give back to the community,” he said. “We thought it would be great fun to do a little autocross competition, along with some team building and get them out here to see who the top gun is for either agency.”

The inaugural event saw the sheriff’s office defeat the fire department in the electronically-timed competition, with team names consisting of Fireballs, Crispy Critters, and Irons.

The teams spent the morning running practice laps before the afternoon competition.

Drivers with the best lap accumulated time around the course contributed to the overall team time.

The sheriff’s office team, dubbed the Taylornators, had the best accumulated time of the day at 1 minute, 39.508 seconds.

The drivers were Wesley Taylor, Kelly Jackson and Travis Buffi.

The second best time of the day was the fire department’s team Fire and Ice, consisting of Matt Clayton, Albert Bass and RJ Lloyd.

Fast and Furious, consisting of Fire Chief Scott Lewis, along with Josh and Jennifer Fanning had the second best time at 1:45.308.

Lewis spoke about the experience.

“It was a great event and the fact that it was a fundraiser made it even better,” Lewis said. “The community members came out and companies within the community contributed to different aspects and provided some assistance. It was a very, very nice event.”

Of all of the drivers competing, Lewis said, it was a member of the fire department who earned the best overall lap time of the day.

Though he wasn’t surprised with Clayton’s overall best lap time, Lewis issued a different kind of challenge for the sheriff’s office to consider.

“I think the fire department is more than capable and I also think that if we had fire trucks on the course, I know we would have won,” he said with a laugh. “Since we were driving much smaller vehicles, it gave the sheriff’s department a bigger advantage.”

The vehicles provided for the challenge were 2016 Chevrolet Corvette Stingrays.

Depending on the particular model, the 6.2 L V8 engine can churn out anywhere from 455-to-650 horsepower.

Lewis referred to the vehicles as exceptional.

“They were very fast and had a lot of power,” he said. “You could tell it had a perfect 50/50 weight distribution from the front and back and it just handled really well. Yet it had enough power where you really had to respect it or else she would have a tendency to spin out. The braking was phenomenal and it was just a very powerful and well-manufactured automobile.”

Petrie said speed is just one aspect in getting a good lap time.

“The real challenge is how smooth and how much finesse the driver has within the car,” Petrie said. “If you hit a pylon, you get a time addition. So you have to be smooth.”

Petrie noted that officials would like to make the challenge a regular event.

“We are looking for this to be an annual event because we think it would be great for the community,” he said. “The first time, it’s always a little bit tough for everyone.”

Though the event was in fact a competition, Lewis said everyone had a great time participating.

“I think one of the neatest things was the fact that both sides were cheering each other on during the competition,” he said. “The comradery between the two agencies was exceptional and I think that even made it more fun. Nobody was angry and nobody had a bad time. It was just a really good time for all with a lot of good people. Even though they were cheering on their own teams, they were cheering on others.”

All proceeds raised from the event will be donated to local organizations and charities.