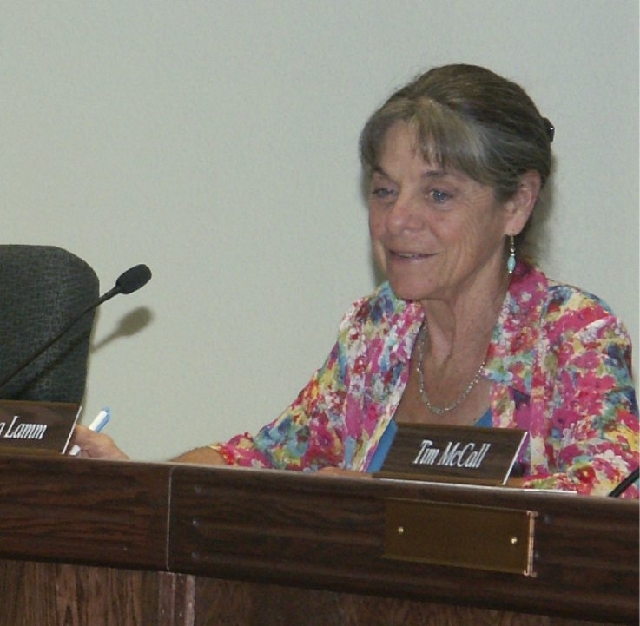 One member of the Nye County Water District Board experienced first-hand recently the possible effects of groundwater withdrawals in the Pahrump Valley.

“After the floods, I had a sinkhole open up in my yard, three and a half feet across, about two feet deep. Since then, we had another heavy rain last Friday, I walked around the field and there’s a lot more holes now,” water board member Donna Lamm told her colleagues Monday.

Nye County General Manager Darrell Lacy added, “there’s at least one building in the valley that had some foundation problems after that last rain.”

Water board member Roberta “Midge” Carver suggested dusting off a county study about using gravel pits as a water catchment area in the lack of a major flood control plan. Pahrump was hit by a major rainstorm in late July that caused flooding in many parts of the valley.

While Lamm’s situation may not rival the recent sinkhole that swallowed part of a hotel near Disney World in Florida, which measured 50 feet wide and 15 feet deep, it was a poignant reminder of one of the water board’s priorities, to address the over-appropriation of water in Pahrump Valley and its possible effects on the future groundwater supply. State Engineer Jason King last October alarmed some developers by advocating Pahrump be designated a critical management basin for water, which gives local officials 10 years to solve the overdraft problem or water rights could be allocated by priority. The rate of recharge of water into the valley’s aquifer has been estimated conservatively at 12,000 acre feet per year, while Pahrump Valley has permitted water rights allowing the withdrawal of up to 62,000 acre feet, which doesn’t include 11,000 domestic wells.

On a political front, the discussion took place less than a week after county Commissioner Frank Carbone requested four water board members be recalled, a request which he later withdrew. That was after terms had expired and complaints members were simply reappointed without considering other candidates. Only water board member James Eason, the Tonopah town manager, brought up the subject. Eason asked for a joint meeting between the Nye County Water District board and the Board of County Commissioners to determine their mission. The water board has been asked to address everything that deals with water.

“In light of what happened last week, there needs to be some clear direction in my mind of what the county commission expects of this board,” Eason said. “The biggest problem we have in front of us is, everything water is too broad. If we’re not accomplishing what you guys feel needs to be done, we need to take a step back and focus and define what that is.”

Carbone said he’d like to have that meeting before the end of the year.

Rick Felling, Nevada Division of Resources chief of hydrology, said last year there has been 30 to 60 feet of water level decline in Pahrump since the 1950s, though pumping levels fell from a peak of more than 45,000 acre feet in 1967, at the height of agricultural activity, to 13,300 acre feet in 2011. A drop in water levels could increase pumping costs, create conflicts between water rights holders, dewater potential aquifers and create subsidence in areas with hydro collapsible soils, he said.

The water district has been mulling over proposed changes to the zoning code to reduce the number of parcels that could be created, thus reducing water usage. One change, suggested by the state engineer, would be to increase the amount of water rights that must be relinquished to the Nevada Division of Water Resources from two acre feet to three acre feet for subdivided parcels outside of a utility service district. Felling estimated the average domestic well in Pahrump pumps a half-acre foot of water per year, about 160,000 gallons.

Greg Hafen II, representing Pahrump Utility Company, said the three main private utility companies in the valley are dedicating water rights back to the state at three to four times the actual use and encouraging conservation measures. Utilities Inc. of Central Nevada recently won approval of a conservation plan that called for giving rebates to customers who trade in inefficient toilets and washing machines, along with rebates for removing salt cedars.

Another suggested change would require a parcel outside of a utility company service area zoned single family residential to be at least five acres to be subdivided. Commercial and industrial zoned lots wouldn’t be affected.

A report detailing the impacts of a development on water would be required for major master plan amendments, in another suggested change. That would also only apply to properties outside a water service district. An engineer would have to prepare the report, which would detail methods for disposing of sewage, controlling water pollution, ensuring the quality of water and water facilities for the development.

Water board chairman Tim McCall said there’s enough one-acre parcels already to satisfy residential owners. The water board will submit comments to a steering committee updating the 2003 master plan for the Pahrump Valley. Planning Director Steve Osborne estimated if all the lots in the current zoning map were populated, Pahrump could have a population of 495,000.

“The number of future lots and parcels needs to be drastically reduced in order to have the amount of water resources to match the master plan,” Lacy said. “In certain outlying parts of the valley, it doesn’t make sense to have small lots, there’s no utilities available.”

But he said forcing some owners of commercial properties to relinquish the amount of water rights required may not give them enough to run their business.

McCall said having to donate three acre feet and keep three acre feet for a business operation would be as much as six times the actual water used. Lacy said water rights donations could possibly be delayed and not required when building permits are pulled.

By keeping the minimum residential lot size available for parceling at five acres, it would spread out the potential of installing more domestic wells over a larger area, water board member John MacLaughlin said.

Consultant Oz Wichman said the spirit of the water rights relinquishment is based on the fact Pahrump has the highest ratio of domestic wells in the state. “To continue that has no good ending,” he said.

Salt cedar removals were seen as one way to reduce water consumption.

MacLaughlin said a salt cedar tree can drink up 200 to 500 gallons of water, which one water board member found hard to believe. The water board wants to host two pilot projects to eliminate salt cedar groves, a stand on Manse Road west of Homestead Road and on a 12-acre county property on Calvada Boulevard west of Dandelion Street. Lamm wanted prominent locations for publicity value. But there were questions where the funding would come from. Lamm also recalled problems the local conservation district had trying to kill salt cedars for good several years ago.

“It’s another way we can show the state engineer we are working to preserve the water we have here. That’s going to become real important I think,” Lamm said. But she said it will be hard to convince some private property owners to get rid of their salt cedars, which are sometimes used for windbreaks.

MacLaughlin said salt cedars would have to be removed between June 1 and Nov. 1, when there aren’t any nesting birds.