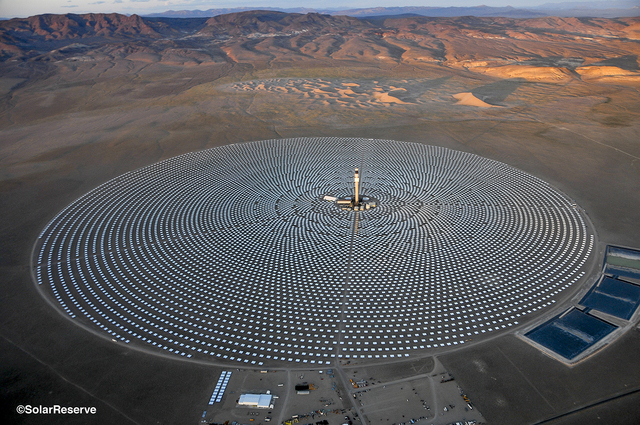 TONOPAH — California-based solar developer SolarReserve said all construction has been completed on the 540-foot tower at the Crescent Dunes solar-power plant outside of Tonopah. That doesn’t mean it is ready to start producing power.

The tower is key to the plant’s operation. Its apex contains the receiver that will field sun rays to the receiver’s heat exchanger and use the sun’s energy to heat molten salt.

The site still has more than 100 construction workers, but as the commissioning process continues, and the stages are completed, that number will drop to about 45 regular employees.

Equity investors have put $260 million into Crescent Dunes, and the project has obtained $737 million in loan guarantees from the U.S. Department of Energy.

Media spokesperson Mary Grikas said the commissioning process is about 75 percent complete. She said, “It means we’re turning on, testing and calibrating each of the systems. So far, there have been no technical issues on the project.”

Over 98 percent of the 10,347 tracking heliostats have been calibrated and, “are working perfectly to specifications,” Grikas said. “The balance will be complete in the next week.”

She said once all the heliostats are online and are synchronized, commissioning the receiver, where the energy from the sun is collected, begins.

Grikas said although the solar plant will be capturing and storing the sun’s energy by end of December, the plant won’t be ready to produce power until sometime in February.

Once the components are working to specification, the process turns to transmitting power to NV Energy.

It also includedeliostat designs and collector field control systems and the key personnel from the CSP business with critical knowledge.

“The technology acquisition further demonstrates SolarReserve’s industry leadership in solar thermal energy storage, and our ongoing commitment to technology innovation and operational excellence through investments in advanced technology research and development,” said SolarReserve’s CEO Kevin Smith. “With this acquisition and continued advancement on the technology, SolarReserve is well positioned to capture a significant portion of the projected $75 billion CSP market expected to develop through 2025.”

With Crescent Dunes Solar Plant rapidly coming online, Grikas said SolarReserve has been approached by other countries interested in its technology.

In South Africa, SolarReserve, along with partner International Company for Water and Power Projects, submitted a bid for the “Redstone” project into Round 3 (CSP) of the South Africa Department of Energy (DOE) Renewable Energy Independent Power Producer Procurement Programme (REIPPPP).

Grikas said, “We’re awaiting announcement by the South Africa Department of Energy, which could happen by the end of the year, hopefully sooner.”