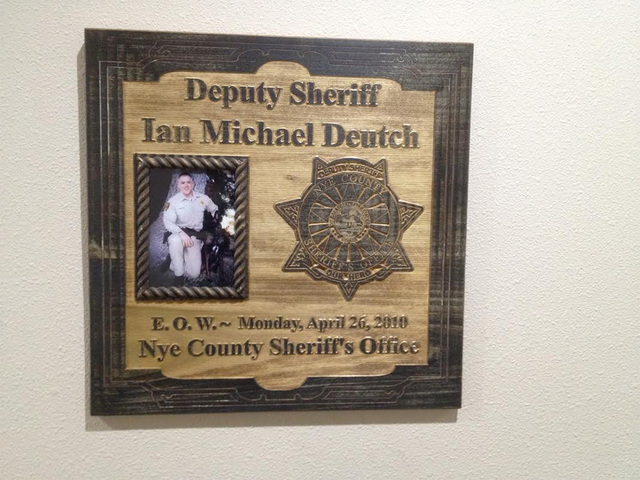 To members of the Nye County Sheriff’s Office, and many member of the community, April 26 is a day for reflection and remembrance for a fallen colleague.

Six years ago this Tuesday, Ian Michael Deutch was shot and killed as he and another deputy responded to a domestic violence call at Lakeside Casino.

Deutch, a graduate of the Southern Desert Regional Police Academy in Henderson, was on his second day back on duty after returning from a deployment to Afghanistan as a member of the Nevada Army National Guard.

He had served for six years with the Nye County Sheriff’s Office.

“We have recently placed a memorial plaque in the main hallway outside the academy classroom,” he said. “Ian will always be remembered. Ian was a recruit from Nye County back in 2005, and that’s when we got to know him as a member of that particular academy.”

Though Forte didn’t have extensive contact with Deutch, he did oversee instruction, where he got to know him.

“I didn’t have a ton of contacts with Ian, but I did teach several classes out here and that’s how I got to know Ian.”

Additionally, Forte said he could sense Deutch would make an ideal sheriff’s deputy, judging from his performance at the academy, which he described as an “intense” 22 weeks.

Among the course of instruction were classes on criminal law, use of force, defensive techniques, including range qualifications and emergency vehicle operations.

Forte also spoke of what is described as a grueling physical training regimen.

“Ian performed very well at the academy and he was an excellent recruit,” he recalled. “He attended the academy back in 2005, and you could tell that he was going to be an exceptional police officer and a great representative for the Pahrump community in Nye County, once he got through the academy. It’s all about being mentally, physically and emotionally prepared, in order to handle this profession.”

As the academy’s executive director, Forte, the former North Las Vegas Police chief has more than 30 years of experience in law enforcement.

He noted that domestic violence calls are among the most dangerous assignments any police officer encounters while on duty.

“We can never stress enough with our young recruits, how dangerous those particular incidences are and how quickly they can evolve from a situation that appears to be under control, but can become deadly. We take domestic violence calls extremely seriously and we stress the importance to our recruits during those types of incidents.”

Forte also noted the poignancy of Deutch’s death just days after returning from a war zone in Afghanistan.

His initial reaction to news of Deutch’s passing was that of shock and sadness.

“His death was shocking and almost like disbelief because he just gotten back from his tour in the Middle East and had just gone back on the streets,” he said. “It was just disbelief that this young man comes back from a war zone in the Middle East and is killed in the line of duty while responding to a domestic violence call in Pahrump. I was still the chief of police in North Las Vegas when he died and I made sure that we attended his service.”

From time to time, Forte said he reflects on what the future had in store for Deutch, had he not died.

“I would venture to say that this young man would have had a very successful career and he would have advanced through the Nye County agency,” he said. “Ian was a very motivated young man, very self-disciplined and really loved the idea that he was going to be working in this profession.”

Forte said one of the many disciplines taught during academy training is recruits are brothers and sisters both in life and death.

“Knowing that Ian was the only recruit that has come through this academy who has been killed in the line of duty, we asked how could we not have something here to honor him,” he said. “This dedication plaque has been in the works for quite some time and I am so grateful that we are able to do this in the memory of Ian Deutch. Myself and several other staff members made an effort to get something placed here in Ian’s memory so that other recruits that come through know who Ian was, what he stood for, and know what he died for. He will always be remembered here for generations to come.”