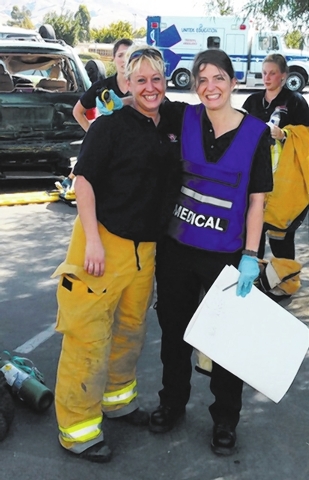 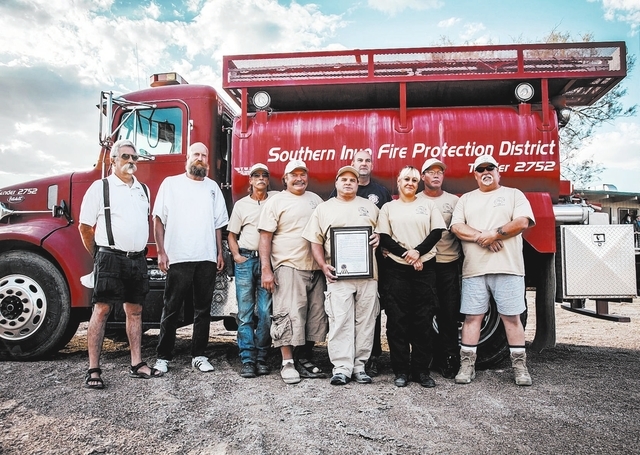 Billy Eichenbaum moves with a bit of a hitch in his gait. At 60, he finds it hard sometimes to climb in and out of a high vehicle, to bend and to lift heavy things. But after years of sleeping with one ear tuned to his hand-held radio, he finds it almost easy to wake in the black of night and don the superhero suit that turns an ordinary person into an emergency responder.

Eichenbaum is nearly twice as old as the average American Emergency Medical Technician and, as a volunteer, is certainly far less well paid. Yet he stands in the gap between life and death out there in the lonesome stretch of desert between Death Valley and Pahrump known as Southeast Inyo County.

He is not alone, though he has been in the past. Two years ago, when he was the lone EMT on SIFPD’s roster, Eichenbaum stood on call 24/7 until more responders could be trained. His dedication to service in a time of extreme need won him Inyo County’s EMT of the Year award.

Since then, the Southern Inyo Fire Protection District, headquartered in Tecopa and covering over a thousand miles of territory, has cobbled together a stalwart crew, one volunteer at a time.

Angie Sinohui has never liked books and tests, but she spent the last six years studying, learning, serving on the job and certifying to become first a Firefighter I and now an EMT — all while working a full-time job to pay the bills.

At 31, Sinohui is the youngest member of the crew and the only member to currently hold both certificates. Until last year, when retired pediatrician Judy Palmer, 71, completed EMT boot camp, Sinohui was also the only female.

Sinohui and Palmer are joined by Lara Murray, an RN at Pahrump’s Desert View Hospital, who pilots a paraglider over Tecopa in her spare time. Thanks to a grant from Inyo County’s Emergency Medical Care Committee, Sinohui and Murray completed a two-week EMT intensive training at Unitek in Freso, Calif.

The crew serves under Fire Chief Larry Levy, who has been with SIFPD in one capacity or other since its official inception and knows its history inside and out. He pores over codes, laws and long cold paper trails searching for any funding source the District may have missed. He also doubles as the mechanic, making miracles of the castoff vehicles handed down by more prosperous departments.

SIFPD’s operations base is held together by EMT and Admin Chief Carl Dennet, an ex-marine veteran of Vietnam who finds himself fighting the mystifying tangles of paperwork required to keep an emergency response unit going.

The fire response team includes Firefighter II Rob Zmuda, who in his spare time, collects, crushes and redeems cans and bottles for the Auxiliary recycling program in an effort to raise money for updated protective gear; Captain Danny MacBrohn, one of the longest-serving members of the crew and a veteran of at least two Amargosa Canyon wildfires; and Gary Barkley, who represents the outpost of Charleston View.

The SIFPD crew watches over every family who sleeps peacefully while ragged wiring sags under their old mobile homes, every elder who wakes in the night with chest pains, every tired driver who overcompensates in a curve and rolls out into the desert, every injured child, every drunk driver, every traveler who is far from home.

There isn’t always a lot they can offer. But last year Eichenbaum and Dennett completed training in Lone Pine, Calif., and at Desert View Hospital to become Advanced EMTs and push the odds even higher of saving a life.

Like any small, volunteer department, SIFPD struggles to pay the bills. Unlike many other departments, the District is funded solely by a local tax initiative that allowed for no cost of living increase. With tax revenues diminished by conservancy land transfers, the District operates at bare bones. Its staff and crew are always working, studying, training, selling raffle tickets, planning fundraisers, collecting cans to keep the vehicles rolling, to keep the doors open.

Oct. 26 marks the sixth annual Firefighters Bazaar fundraising event at the Tecopa Hot Springs Resort, including a flea market and crafts area, Indian tacos, food, music and in the evening fire dancing by Pyro Sagas and music by Pablo Tecopa and the Dusty Butter Band. Raffle tickets are on sale now for a beautiful quilt and a variety of travel and adventure packages.