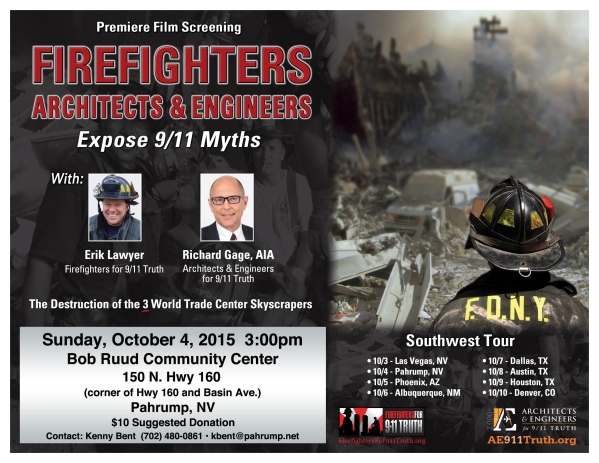 There are individuals in town who want a new investigation into what caused the World Trade Center Towers to collapse on Sept. 11, 2001.

Gage is also a member of the American Institute of Architects.

Bent said there is nothing consistent with the building’s collapse from the fires that erupted after two passenger planes hit the towers.

“Everything is consistent with a controlled demolition for all three buildings,” he said. “There’s actually several thousand firefighters, architects, and engineers who are licensed that are demanding a new investigation. It’s just really a way of taking another look, because most people don’t know any further than airplane, fireball and collapse.”

Bent was careful not to speculate on any kind of motive for bringing down the towers.

He also said he was accosted by individuals who shared a different view of the tragedy during a similar presentation.

“When I was trying to talk about this years ago, I was spit on and had materials ripped out of my hands,” he said. “It’s getting a lot easier to talk about this, because everybody is starting to sense that something is wrong.”

During the presentation, Bent said Lawyer and Gage will attempt to dismantle the two dozen myths, which compromise the official account of the tower’s destruction.

“Most people are now aware that building seven was never in the 9/11 commission report,” he said. “There are a lot of things that need to be looked at. All of the stories that we hear about the conspiracy theories and the wild plots, this is just breaking down the myths and breaking down what is known.”

The Pahrump presentation is part of an eight-city Southwest tour.

Bent said the tour comes on the heels of a two-day educational outreach to structural engineers attending the annual convention of the National Council of Structural Engineers Association this weekend at the Red Rock Casino in Las Vegas, where visitors who stop by their booth will present evidence for the explosive destruction of World Trade Center Seven.

“One point booth volunteers will be making is that the official story about the attacks of Sept. 11 falls apart when one looks squarely at the facts and applies fundamental scientific principles to interpret them.”

Pahrump’s presentation is scheduled for Sunday, Oct. 4 at the Bob Ruud Community Center, at 150 N. Highway 160 at 3 p.m.