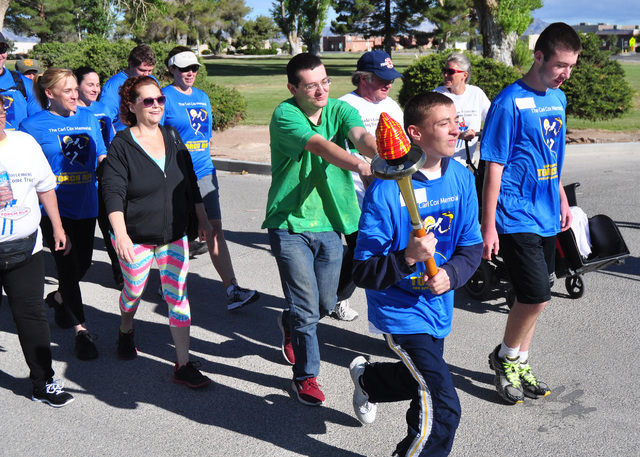 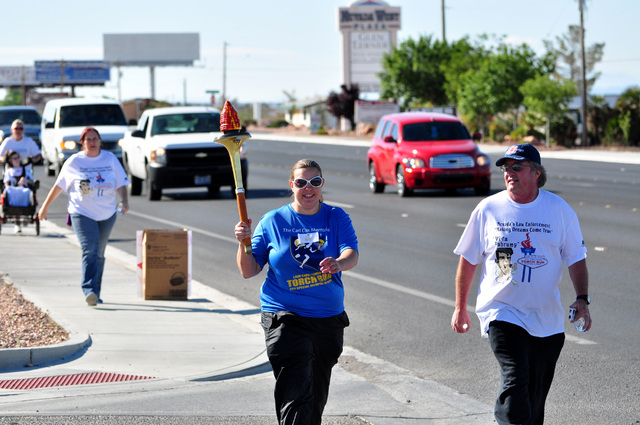 The torch was carried by the athletes and coaches 3.3 miles from the Calvada Eye, down Highway 160 to Basin Avenue to its final destination, the Nye County Sheriff’s Office. Jim Soltz, Area Director for Special Olympics, said the torch is similar to the torch carried by the Olympic athletes.

“To call this a run may be stretching it because the the athletes will carry the torch any way they can,” he said. “If it means skipping or even walking.”

He said Special Olympics athletes carry the torch throughout the state. The torch starts its journey on the Arizona and Nevada border and makes its way to Reno through other towns like Pahrump.

Soltz said law enforcement in Nevada have adopted Special Olympics and are the “guardians of the flame” and run with the athletes.

Nye County Sheriff Sharon Wehrly and Sgt. David Boruchowitz attended a small ceremony before the event along with four other deputies and gave some words of encouragement to all the runners.

“All of law enforcement supports this run,” Wehrly said. “We will have different officers taking a leg of the run. I was introduced to this last year and now I am honored to be part of this.”

The sheriff said she would also try to run with the torch.

A Nevada State Highway patrol car led the procession from the Calvada Eye to insure runner safety all the way to Basin Avenue.

“I am happy how it all turned out this year,” Soltz said. “We got so much needed support with selling the t-shirts from the community.” This year Special Olympics raised $4,800, which will go towards covering the cost of sending Pahrump athletes to Reno. According to Soltz, the cost is $5,000.