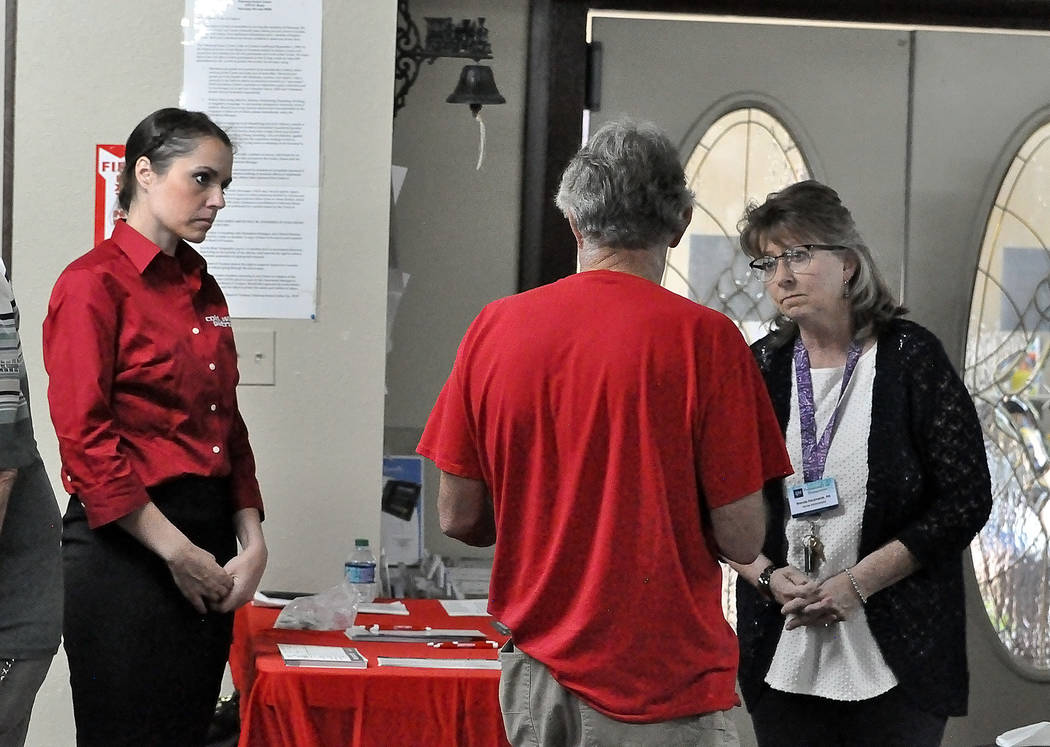 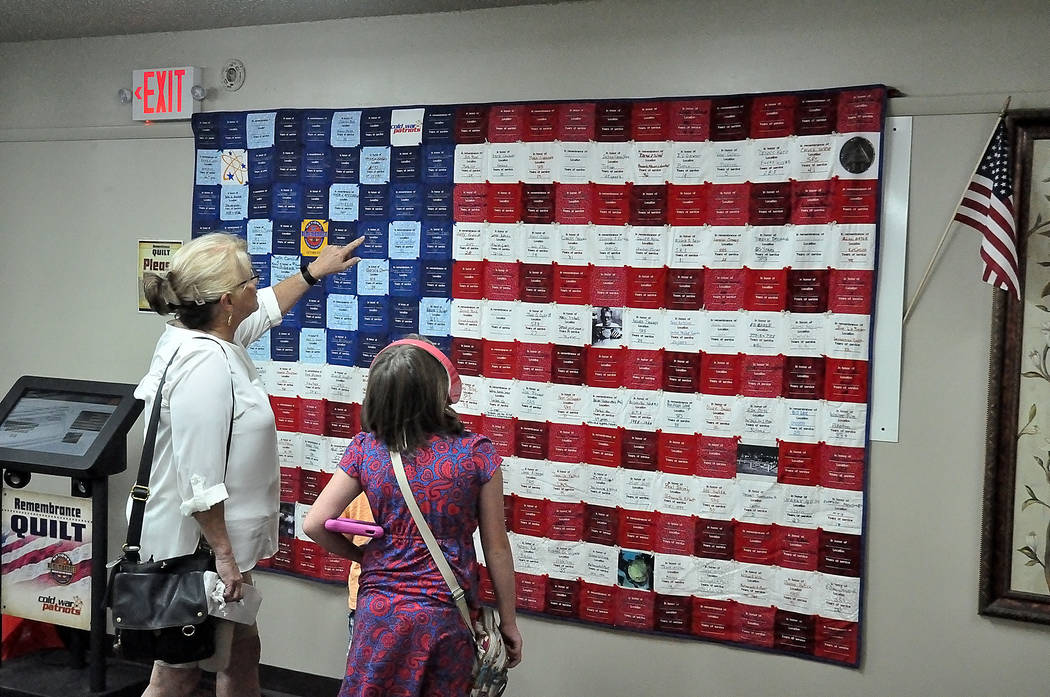 Horace Langford Jr./Pahrump Valley Times - Janet Hansen, of Pahrump, and her grandchildren, look at the quilt commemorating former nuclear weapons and uranium workers. The quilt is the centerpiece of the exhibit titled "Remembrance Quilt Experience" that will be displayed at the Pahrump Senior Center until Aug. 16. 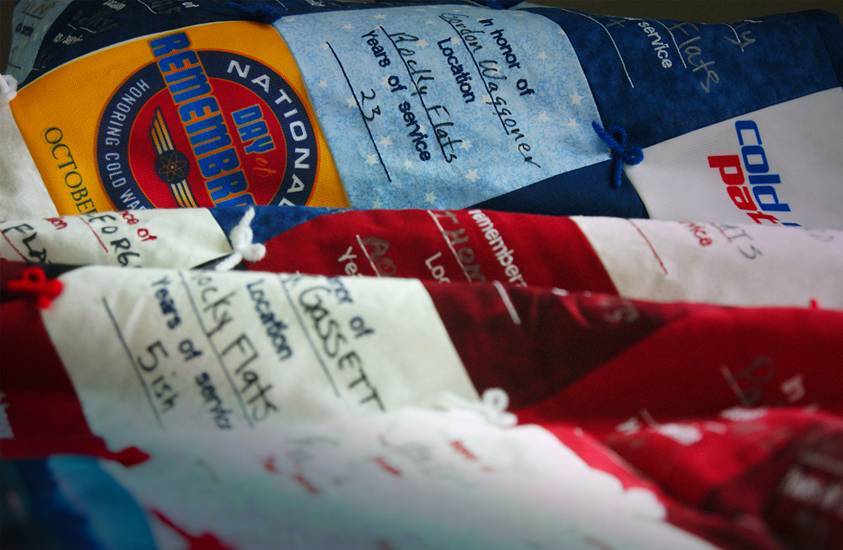 Special to the Pahrump Valley Times The Cold War Patriots are honoring uranium workers of the nuclear weapons and uranium industries with an exhibit titled Remembrance Quilt Experience. This a photo of part of the exhibit prior to its arrival in Pahrump. 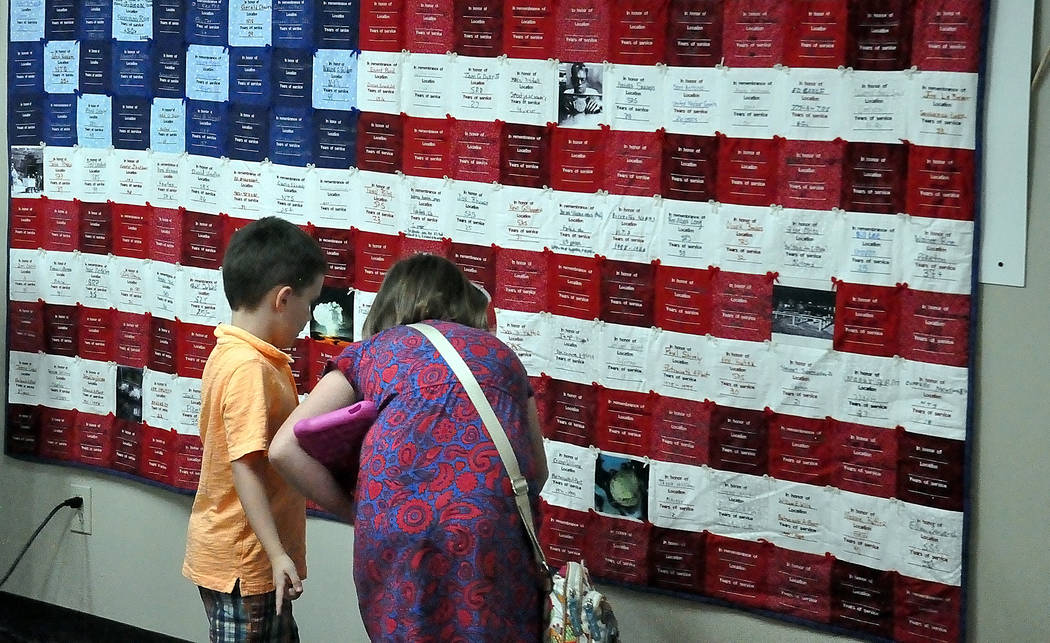 Horace Langford Jr./Pahrump Valley Times A look at the Cold War Patriots event at the Pahrump Senior Center. Since 2011 when the quilt was created, it has been displayed at various locations around the country.

Standing in front of the quilt commemorating nuclear weapons and uranium mine workers from across the country, Janet Hansen was able to find a few familiar names.

Hansen, of Pahrump, stopped at the Senior Center with her two grandchildren, Emily and Ethan, to see “Remembrance Quilt Experience,” the exhibit that was put on by Cold War Patriots, a Denver, Colorado-based advocacy group that connects former nuclear weapons and uranium workers with benefits.

The exhibit that’s showcased only at a few select locations across the country will host a limited engagement in Pahrump Aug. 3-16 in the Pahrump Senior Center, 1370 W. Basin Ave. Admission is free.

“I came here to see some of the folks I used to work with. It was a wonderful place to work, had a lot of really good people out there from all over,” Hansen said.

Hansen still remembers a joint revocation experiment, when U.S. and Russia exchanged teams to conduct the same experiment in each other’s countries.

“Not only did we do an experiment with them, but we also did things in the evening with them,” Hansen said. “Some of us would stay up, we had a co-ed baseball game, softball game. They had never played softball before, and it was hilarious. It was so much fun.”

The Pahrump Senior Center had the smaller version of the quilt featuring about 200 names, as the facility couldn’t accommodate the original piece because of its size.

The quilt was put together by a volunteer of the Cold War Patriots who spent more than 300 hours over the course of a year sewing the individual squares together with 1,000 hand-tied bows.

Since 2011 when the quilt was created, it has been displayed at various locations around the country, including the high-profile venues such as the National Atomic Testing Museum in Las Vegas, the U.S. Department of Energy in Washington, D.C. and the U.S. Senate Rotunda.

Chip Chapman, Cold War Patriots regional director, said the quilt is the organization’s way of paying tribute to the community of former nuclear and uranium workers.

“It’s just part of what the Cold War Patriots organization does. We like to pay honor and tribute to these former workers who put themselves in harm’s way, and a lot of times it cost their life because of the work they were doing to secure our national defenses,” Chapman said.

Marvin Markham, who worked at the Nevada National Test Site as an installer of electrical wiring on future testing areas for two months, also stopped to see the quilt.

“It was a good place to work. One thing, you worked your trade. It was interesting to find out how and why they were testing nuclear power at the time,” Markham said.

Mitzi Sears worked in the environmental safety and health department before retiring in 2008. Sears said she is currently recovering from cancer and is getting assistance from Cold War Patriots for her treatments. Sears said although she was aware of the possible hazards to her health, she chose to work at the test site.

“I’m very proud of all these people,” said Sears overlooking the center. “I think that we all had a part in growing our country. We have a nation we need to be proud of.”

“I loved my job, I didn’t really want to retire, but it was time,” she said.

Sears said she also found the names of several workers from the Nevada Test Site on the quilt.

“It’s just times that nobody else will ever know about, but it was lovely. Great memories,” she said.