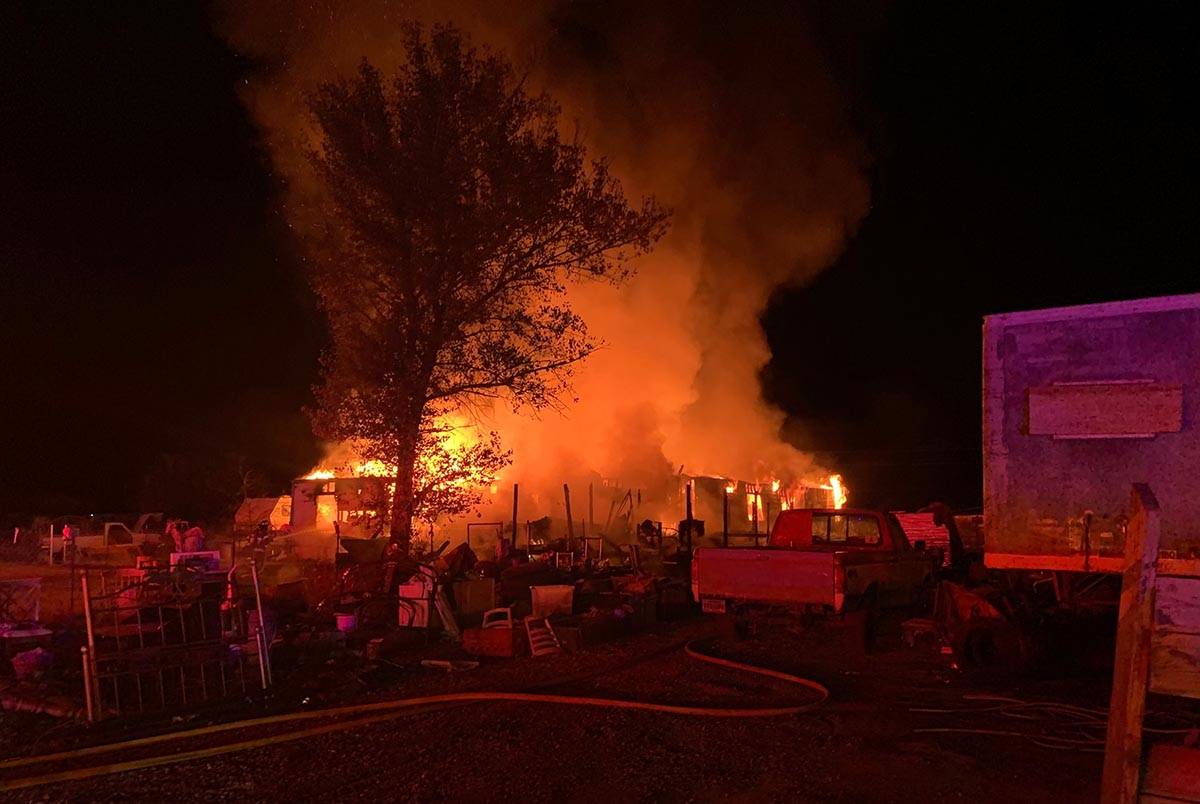 One person was taken to a hospital after a "large structure" fire in Pahrump on Tuesday, Nov. 24,2020.

A series of fires, a motor vehicle crash and one rescue assignment kept area fire crews quite active this month.

Pahrump Valley Fire and Rescue Services Chief Scott Lewis said crews were dispatched to a report of a large unknown type of fire in the area of Fox Avenue and Gamebird Road on Friday, April 16, at approximately 9:50 p.m.

Lewis also noted that due to the weather conditions at the time, crews were forced to remain on scene much longer than expected.

“That was a long-duration incident and it was wind-driven over the course of the weekend, so we were out there for an extended period of time making sure that the fire was dead out, and to make sure there was no further extension,” he said. “The cause of the fire appeared to be an organic breakdown, that being spontaneous combustion.”

“Crews arrived on location and found the accident as described,” Lewis said. “They determined that the patient was not trapped, however, they required medical transport and that patient was subsequently transported to a Las Vegas-based hospital by ground.”

Hours later on the same day, fire crews were summoned to a rubbish fire on the south end of town at approximately 5 p.m.

“We were dispatched to the 6500 block of Jane Avenue where crews arrived to find a large rubbish fire in close proximity to several structures,” Lewis said. “Crews made access onto the property where they quickly controlled the fire with use of some heavy equipment that was located on the property. The fires were separated and brought down to a manageable size. There was no extension to the structures and there were no injuries. There were multiple calls on that day as well.”

On April 12, fire crews were dispatched to the 600 block of East Bourbon Street for what can be described as an unorthodox rescue assignment.

“It was found that a young female had her foot trapped under a kitchen appliance,” Lewis explained. “Crews quickly extricated the individual, who was medically assessed but declined transport. She was washing dishes in the sink and there was a separation from the tile floor to the underside of the kitchen cabinets. Her toes went underneath it, and because of the off-set angle, she became trapped and literally could not move. Using some finesse and a set of irons, we placed the tool and made a couple of quick taps, to lift it up just enough where she could free herself,” Lewis said.

On April 11, fire crews were dispatched to the 4300 block of East Comanche Drive for a structure fire at approximately 9:29 a.m.

“That fire was located in an area without hydrants and early reports indicated a possible brush fire extending to the dwelling,” Lewis noted. “Our Engine 3 crew arrived on location within several minutes and found a well-advanced fire that appeared to have originated on the outside of the house and moved to the inside through open doorways. There was heavy fire showing through the windows and through the rear roof.”

Lewis went on to say that crews commenced a defensive exterior attack upon determining that all occupants and pets were accounted for.

Once crews quickly controlled the fire, with no extension, three of the occupants requested medical assistance and evaluation for non-fire related issues.

“They had pre-existing conditions that were exacerbated by stress,” Lewis noted. “They were transported to the local hospital. Crews moved to a modified interior attack, and pulled additional ceilings, mopped up and did the overhaul. Valley Electric Association crews arrived on location to secure the power. The exact cause of the fire is being investigated by the State Fire Marshal’s Office, however, the fire is thought to be accidental in nature.”