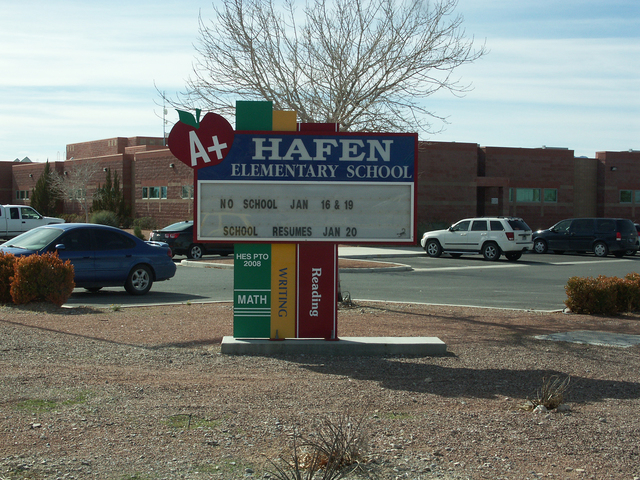 State education officials led by the governor are working on a plan that could see the state operate of some of Nye County’s schools as charters, reducing local oversight.

A day after Gov. Brian Sandoval’s State of the State address where plans were laid out for improving the state’s struggling educational system, state Superintendent of Public Instruction Dale Erquiaga expanded on the governor’s plan for underperforming schools.

The state has identified 78 underperforming schools to be run by the state as charter schools. The list includes six Nye County campuses. The state list represents 10 percent of Nevada’s 724 public schools.

The six in the Nye County are the elementary schools Hafen, Floyd, Round Mountain, Amargosa Valley and Gabbs, and Pathways High School.

Nye County Superintendent Dale Norton said Friday he was surprised by the announcement and had no forewarning it was coming. However, further comment this week was not provided by Thursday’s deadline.

Sandoval proposed the state should take over underperforming schools under an “Achievement District.” The announcement was part of Sandoval’s proposals for boosting school spending by $782 million, choice with charter and zoom schools, English language programs and reforms to modernize the classroom and the Nevada system for distributing funds statewide.

Erquiaga said if Sandoval’s plan to create an Achievement School District is approved by the legislature this year, no more than six to 10 underperforming schools mostly likely would see a state takeover in the 2016-17 school year.

It remains unclear which of the state’s 78 schools will be the first to fall under the Achievement School District umbrella, but Nye County has schools listed in three different classifications of poor achievement provided by the state.

Nye County Board of Trustees member Robert Mobley said Thursday said new the governor’s announcement was surprising because new programs at the schools haven’t had the time yet to be evaluated.

He said the decision to include the elementary schools Hafen and Floyd seemed premature as the district uses a growth model to track student performance.

“The fifth grade students performed so well before they took the fifth grade test, it didn’t demonstrate measurable growth because they were already high achieving students,” he said. “Ultimately you created a system where you have failure because you cannot meet the goals. If you have 100 percent, you’re going to fail the next year because even if you have 100 percent again, you’re not see growth. That sounds stupid, but those are the rules.”

During his address, Sandoval said it was time to “draw a line in the sand” while proposing new funding for school turnaround.

He stressed the importance of literacy, early childhood education and great teaching as the Silver State hovers near dead-last in quality education across the United States.

The Las Vegas Review-Journal contributed to this report.