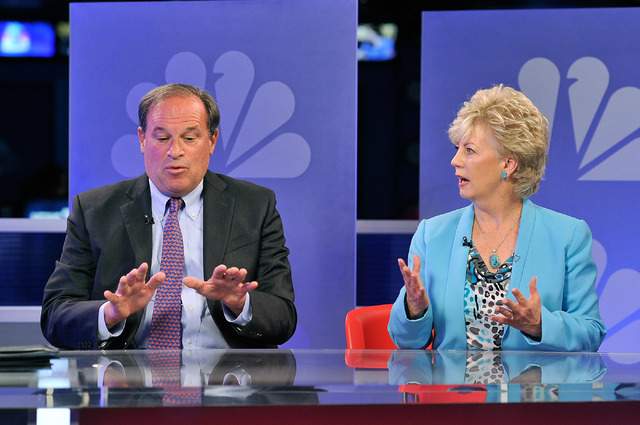 LAS VEGAS – Republican Dan Schwartz on Tuesday proclaimed that his Democratic opponent for Nevada treasurer isn’t qualified for the job because she’s an accountant who doesn’t know much about investing in private markets.

Kim Wallin, the current controller, shot back in their first televised debate that Schwartz doesn’t know much about how government works. She said there are legal limits on investing the state’s money so only safe products such as government bonds are available at a lower rate of return.

“Kim, I wrote the book on private equity” investments, said Schwartz, a businessman and investor who has authored a book on the subject. “I would modestly suggest you and Kate know very little about private equity,” he added, referring to current Treasurer Kate Marshall.

Schwartz has criticized a $50 million private equity fund approved under Marshall that he says hasn’t seen a good rate of return and is in fact losing money. Wallin defended the fund, saying it’s designed as a long term investment that could take seven to 10 years to pay off.

Wallin has said she could probably make $10 million more a year for the state’s investment by closely monitoring the timing of investments. Schwartz has said he could safely make $30 million to $40 million more — a figure Wallin called unrealistic, saying Nevada would have to make high risk investments that aren’t allowed under state law and would be subject to Wall Street ups and downs.

The treasurer is in charge of investing $2 billion of the state’s money with the approval of the Nevada Board of Examiners chaired by the governor.

Jon Ralston, who moderated the half hour debate on his “Ralston Reports” show on KSNV Channel 3, asked if Wallin would concede that Schwartz knows more about investments than she does.

“In the private sector, ” Wallin said, but not in the government arena where she has served for two terms, or eight years as controller, working closely with the state treasurer.

“There are a lot of CPAs managing money,” Wallin said earlier. “I have a lot of people coming to me” asking her opinion on whether their stock broker is doing a good job managing their money.

During the debate, Ralston played clips from a Democratic Party video tracker that showed Schwartz at a GOP event talking about working with the controller to put together a proposed state budget, which is the governor’s job.

He also misstated how much Nevada’s general fund. He said it was $2 billion, but it is more than $6 billion for the two-year budget period. Schwartz said Tuesday he was referring to the $2 billion the treasurer.

“The treasurer and the controller may have some ideas for the budget,” Schwartz said, defending his proposal nonetheless. “We’re going to bring some new ideas for the office.”

Wallin, who clashed with Schwartz on just about every subject, said the only budget the treasurer is authorized to put together is for the office itself. That budget request goes to the governor.

Schwartz has said he wants to introduce a bill in the legislature to allow some higher risk investments to boost Nevada’s returns while still offering protections.

Both candidates said they want to come up with a new funding source for the Opportunity Scholarship fund managed by the treasurer since it is expected to run out of money in a few years.

The program, which helps needy Nevadans attend college, has been funded by tobacco settlements, which have been drying up as people smoke less.

Schwartz said one possible new funding source could be slot machine fees collected by the state, some $250 per year per slot machine. He suggested the annual fee could be raised to feed the scholarship fund, although he didn’t say by how much.

Wallin said she has been thinking about tapping into whatever fees the state may collect from the medical marijuana industry once it gets underway.