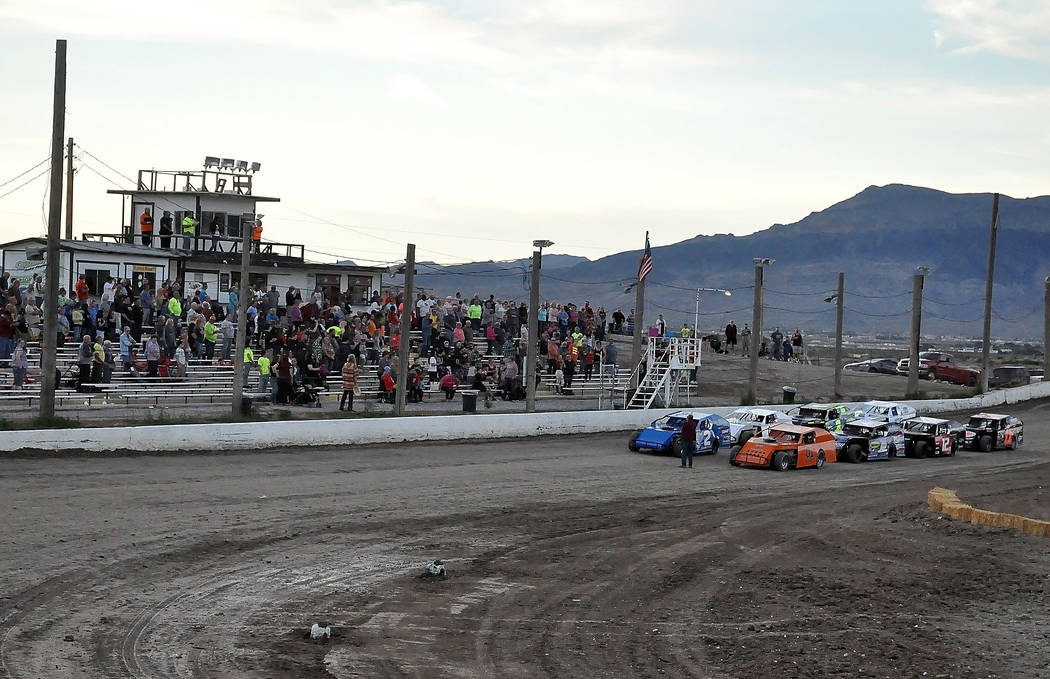 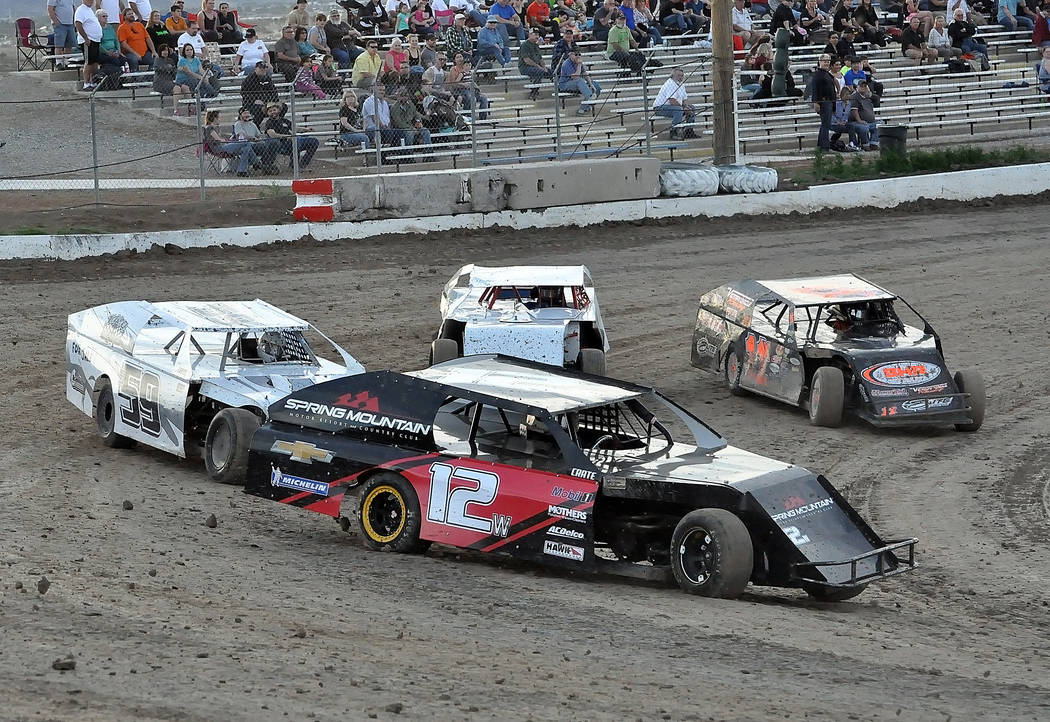 Horace Langford Jr. / Pahrump Valley Times Jim Wulfenstein takes turn one at the Pahrump Valley Speedway during the Stormin’ Mormon race in one of the heat races. Wulfenstein survived to advance to the feature race and came in 11th out of 18 cars. His son Bryan Wulfenstein finished 13th. 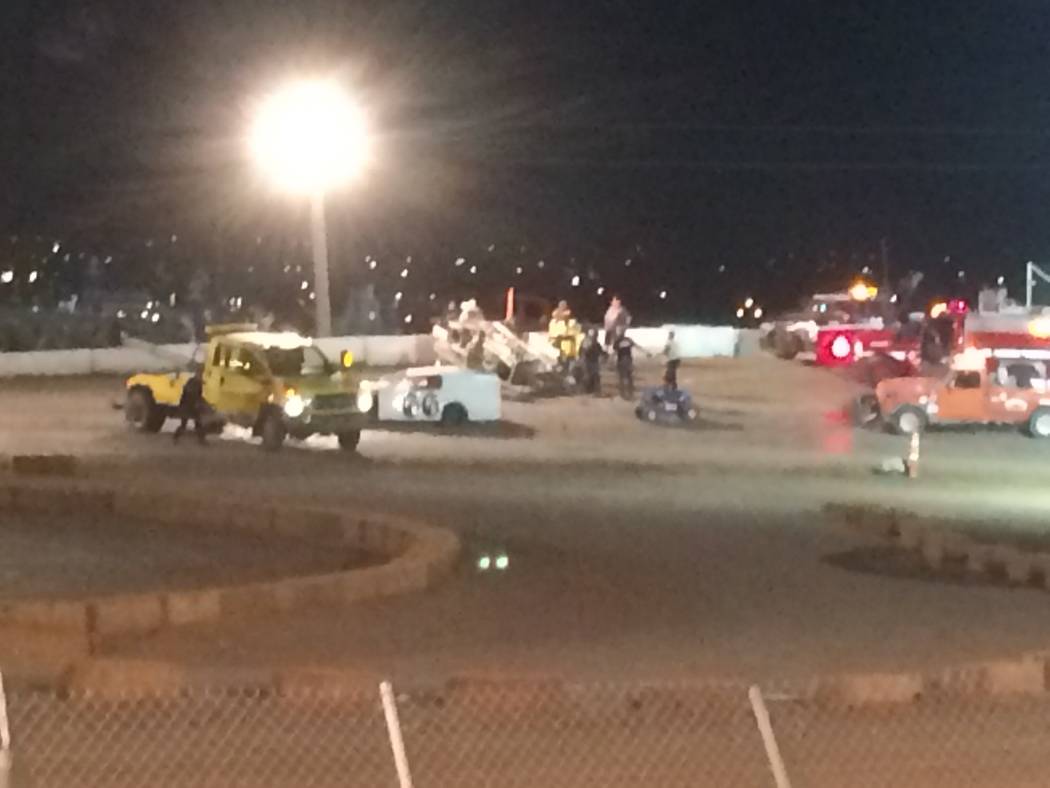 Vern Hee / Pahrump Valley Times Emergency vehicles crowd around Tony Kincaid’s number 59 car after he flipped in midair and landed upside-down on turn four during one of the heat races in the Stormin’ Mormon Showdown.

The 31-car feature Modified race for the Stormin’ Mormon Showdown on March 11 at the Pahrump Valley Speedway was won by Bobby Hogge from a racing team out of Salinas, California, who won the $5,000 purse.

The race was a tribute to Ray Wulfenstein, who passed away in January and who raced under the name of the Stormin’ Mormon.

“I think Hogge is one of the best drivers on the West coast,” Bryan Wulfenstein, one of the organizers of the Stormin’ Mormon race said. “I think overall the race went nicely. Leland Hibdon and Levi Kiefer did a great job helping us to put this together. They have been racing a long time, which was helpful. It was a great, good old-fashioned race and everyone had a great time.”

The largest payout race of the year was not a disappointment to race fans.

“I really enjoyed the Stormin’ Mormon,” racer and fan Steve Stringer said. “I thought the race was one of the best races I can remember. It was well run and organized and there was no down time. I thought there was always something for spectators to see.”

Wulfenstein said one of the things that helped in making the race more enjoyable was how the heats were set up.

“At the beginning of the race the drivers all pulled out a number, which gave them the order of the first heat,” Wulfenstein said. “The drivers then got points from how they finished and if they passed someone. I think the points for passing made the race more exciting.”

Wulfenstein said there was also a rule for the number of caution flags you could get.

“If you caused two flags then you were gone,” he said. “It motivated the guys to get going.”

He said when all the points from the heats were tallied, the top ten cars automatically went to the main heat and they drew a number for the pole position. Then the top four cars from the B heats went to the feature race. So instead of 31 cars racing in the final, there were the top 10 and eight from the B heats.

Although the caution flags were at a minimum, there still were some hairy moments on the track. One in particular was in one of the heat races. Clifton King in his number 66 car tangled with Tony Kincaid’s 59 car in turn four, causing Kincaid to flip in the air and come down hard upside-down, where he lay for some 20 minutes. According to Wulfenstein, all the drivers walked away with no medical problems.

Wulfenstein said there were only minor problems in organizing the event and that had to do with getting racers to come out to the race.

“We had to convince some racers that if they won, the money was there,” Wulfenstein said. Apparently some tracks have had races and not paid the winners.

That was definitely not the case for this race. In fact, Wulfenstein said they paid $5,000 to the winner, which was more than what was promised. The flyers for the race promised a $3,000 purse to the winner.

The success of this race means that there will be one next year, but hopefully bigger.

“We have a year now to plan to make it bigger and better,” Wulfenstein said.

And he is hoping for one other big race.

“I would like to get a big race for the Harvest Festival in October,” Wulfenstein said.