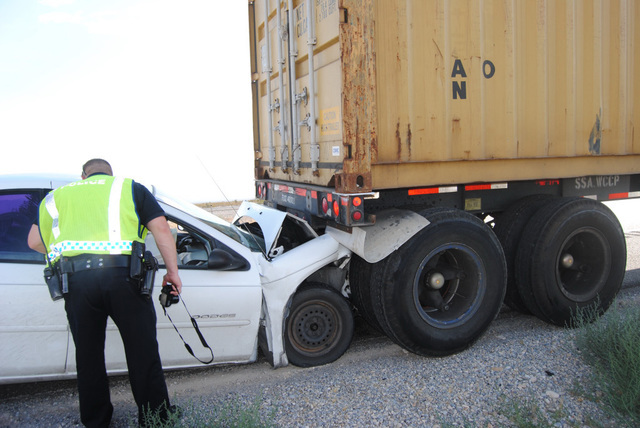 One person was transported to a Las Vegas hospital after colliding with a tractor-trailer along Highway 160 late Tuesday afternoon. The crash occurred on the Clark County side of the highway near mile marker 34. NHP is investigating the cause of the collision. Special to Pahrump Valley Times 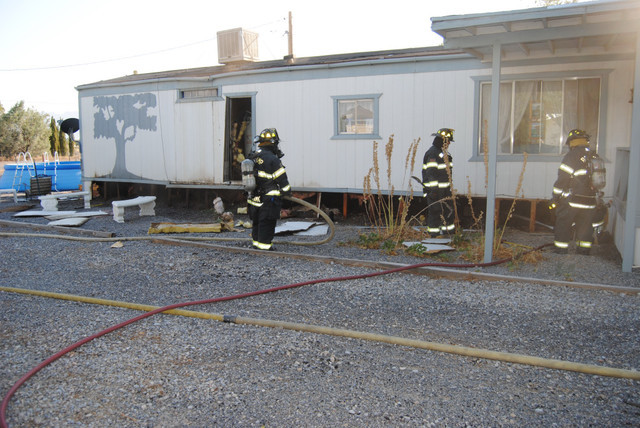 On Wednesday, fire crews were dispatched to the 1700 block of West Horn Street after dispatchers received reports of a structure fire, where one person was transported to the hospital. That person was reportedly trapped inside the residence but was freed just before fire crews arrived on scene. Special to the Pahrump Valley Times

One person was transported to a Las Vegas hospital late Tuesday afternoon following a rear-end collision along Highway 160.

Pahrump Valley Fire and Rescue crews responded to the scene in Clark County near mile marker 34.

“Upon arrival, we found a car versus a tractor-trailer that were traveling northbound in the same direction,” Fire Chief Scott Lewis said. “The car had struck the tractor-trailer from the rear and the tractor-trailer actually dragged it on to the shoulder of the road. While there was no entrapment, there was an injury reported and that patient was transported by ground to a Las Vegas hospital.”

On Wednesday, fire crews were dispatched to the 1700 block of West Horn Street after dispatchers received reports of a structure fire, where one person was transported to the hospital.

That person was reportedly trapped inside the residence but was freed just before fire crews arrived on scene.

“Upon arrival, crews found a fire condition at the rear of the house extending to both the underside and into the interior,” Lewis said. “Crews commenced an instant interior attack and also removed the decorative skirting from around the single-wide manufactured dwelling. They quickly controlled and extinguished the fire without further extension. There was a person reportedly trapped in the house.”

The cause of the fire is believed to be an accidental electrical malfunction.

On Thursday, crews were dispatched to the south end of town just after 8 p.m.

“We responded to BLM land just south of Gamebird Road,” Lewis said. “Upon arrival, crews found a mesquite grove fire which was quickly extinguished. BLM was also on location for that. There were no injuries reported.”

One day later, fire crews were summoned to Vista Road for a slow-moving grass and manure fire just after 9 p.m.

Fire crews managed to contain and extinguish the flames in short order without incident.

First responders were also dispatched to stage for a gunshot victim late Friday.

Lewis said once the scene was cleared by sheriff’s deputies, medics moved in to assess the patient.

“Mercy Air was unavailable due to the weather, so we transported the patient directly to Desert View Hospital,” Lewis said. “We later transported that patient with the Mercy Air crew to UMC Trauma in Las Vegas.”