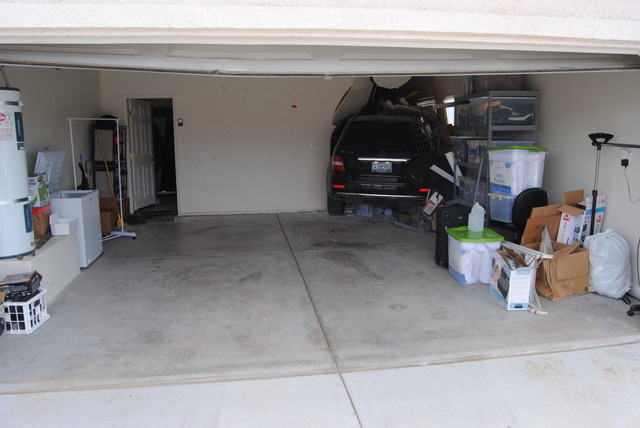 Fire crews were dispatched to a home Wednesday along South Laguna after the driver of an SUV somehow slammed the vehicle through the interior of an occupied residence.

No injuries were reported, but Pahrump Valley Fire and Rescue Chief Scott Lewis said both the vehicle and the home suffered severe damage.

“Upon arrival, fire crews found an SUV located deep within the residence through the attached 2-car garage, impacting both exterior load bearing and an interior wall well into the living space,” he said. “The occupant self-extricated and claimed no injury, however there was severe structural damage.”

Due to the damage, the home was ‘red-tagged,’ meaning it could not be occupied until immediate repairs were done. The driver of the SUV was not identified.

Also on Wednesday, a Pahrump man was transported to UMC Trauma via Mercy Air Wednesday afternoon after crashing his Utility Task Vehicle in the desert area near the 1700 block of West Labrador just after 2 p.m.

“As we were en route, it was determined that the accident actually occurred in the desert area off of Gamebird Road,” he said. “Upon arrival, we found the patient sustained a serious lower leg injury as a result of the accident. Patient care was transferred to Mercy Air 21 who flew the patient to UMC Trauma in Las Vegas.”

On Monday, fire crews were dispatched to the area of Happy Lane for a one-vehicle rollover as a result of a high-speed law enforcement pursuit.

“Crews were moved up where they evaluated one patient who was the sole occupant of that vehicle that rolled over,” Lewis said. “Mercy Air 21 was not available at the time, so the patient was transported to Desert View Hospital.”

An apparently tense situation occurred on Sunday as emergency crews responded to a home along the 4000 block of West Venza Street just after 2 p.m. after a report of a mortar round being discovered.

“Crews were dispatched for Level One staging for an explosive device which was uncovered by the sheriff’s office,” Lewis said. “Crews remained on location and assisted the sheriff’s office until it was deemed no longer an emergency. It was an 81-millimeter mortar round that had been drilled out, rendering it innocuous.”