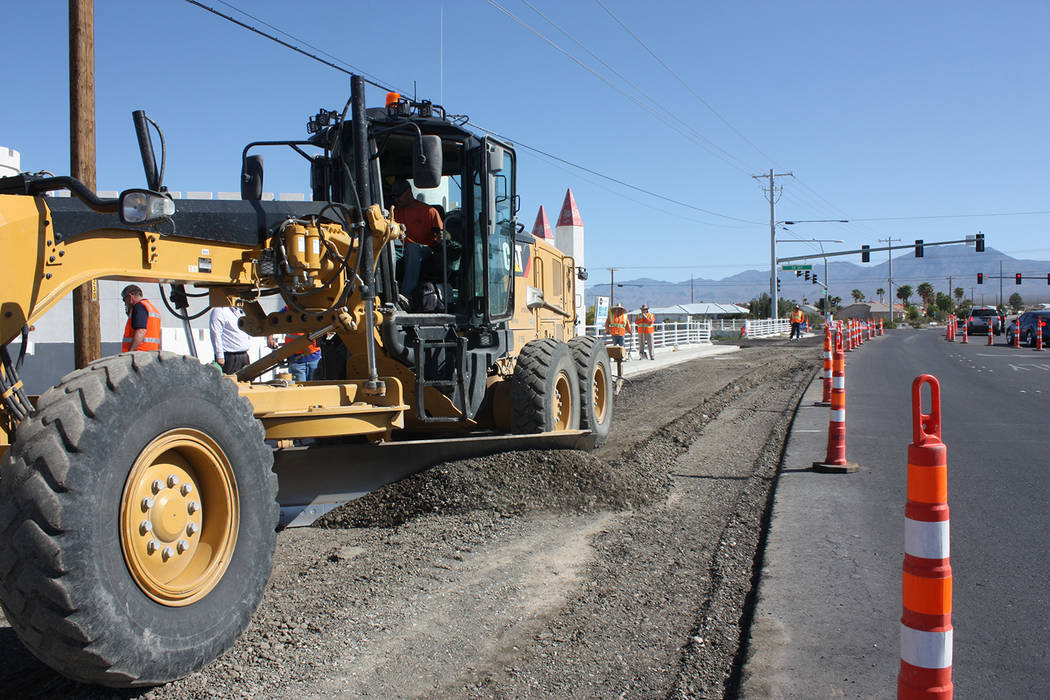 Robin Hebrock/Pahrump Valley Times The southbound lane of Homestead Road at Hwy. 160, which has been closed for six months, is set to temporarily re-open. While the county waits for Great Basin Water Company to finish its engineering plans, it is utilizing a makeshift solution in the interim. 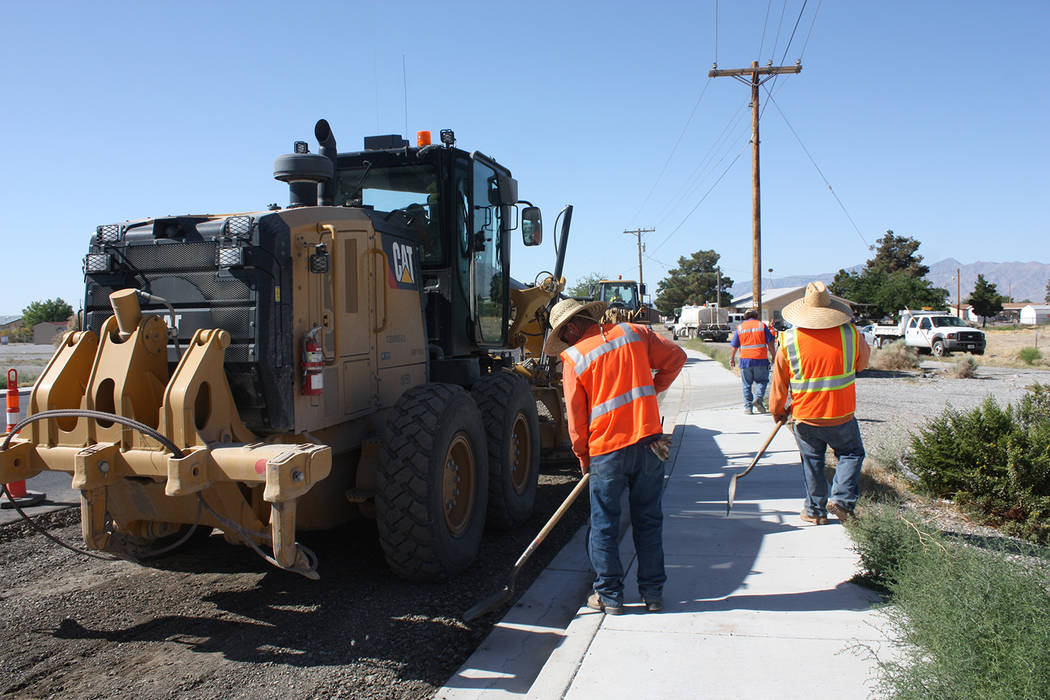 Robin Hebrock/Pahrump Valley Times Nye County Public Works crews were out on Homestead Road at the intersection of Hwy. 160 preparing for a layer of cold mix on Thursday, May 17. The cold mix is not a permanent fix however and Great Basin Water Company must still undergo construction on the area at some point in the future. 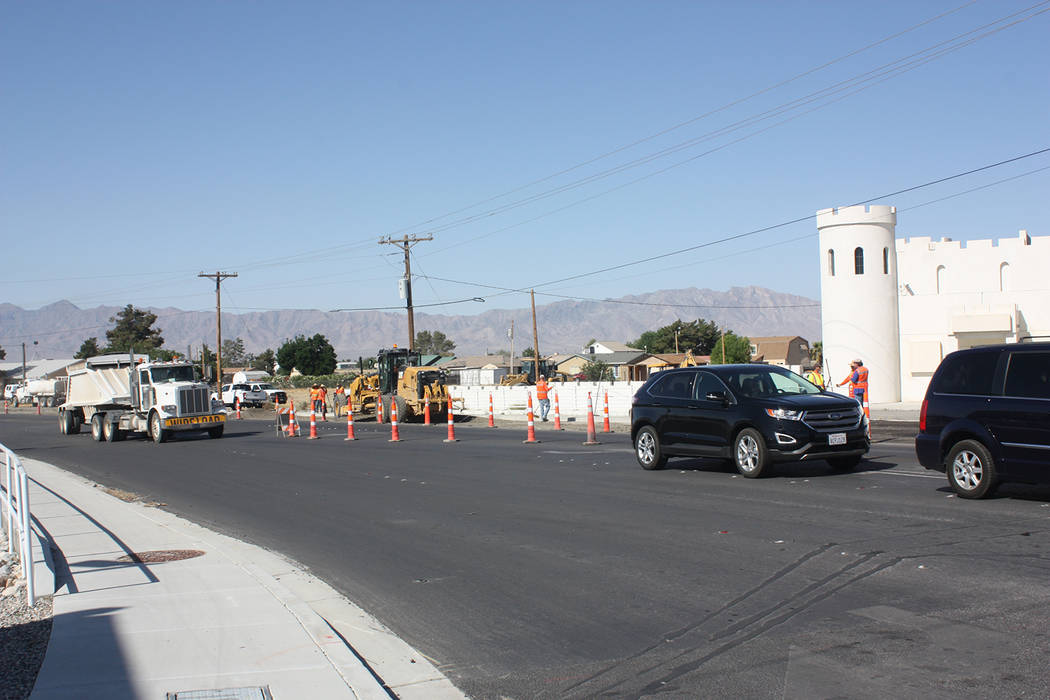 Robin Hebrock/Pahrump Valley Times A view of the road work being undertaken on May 17 at the corner of Hwy. 160 and Homestead Road. 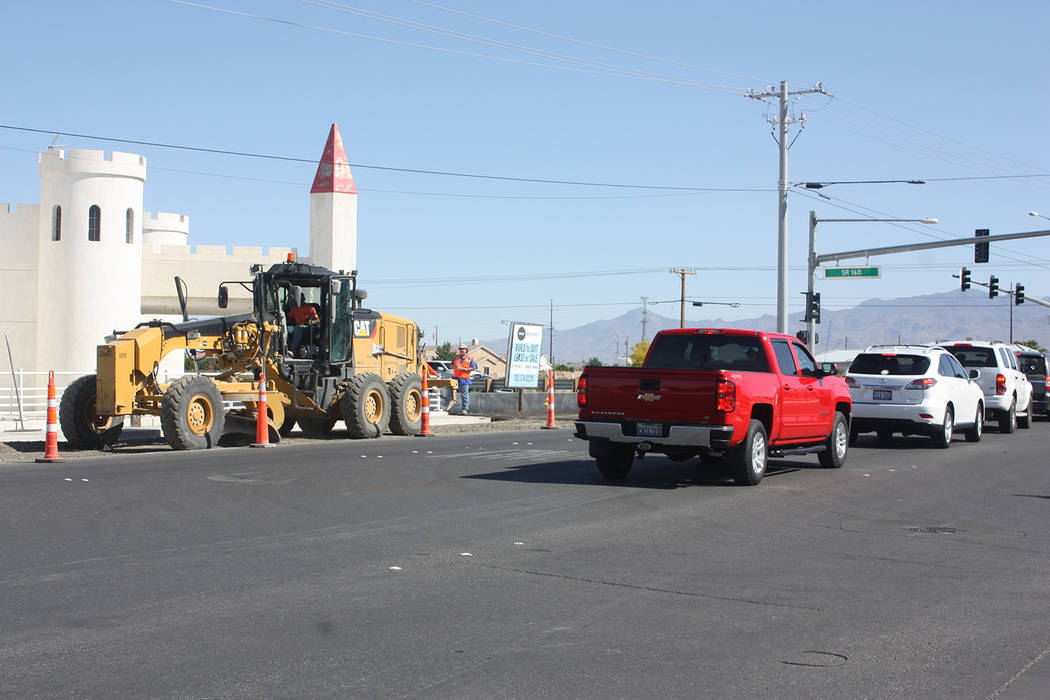 Robin Hebrock/Pahrump Valley Times This photo shows motorists waiting to execute a left-hand turn at the intersection of Hwy. 160 and Homestead Road, where a cone zone has sat for several months. The lane closure at the intersection will be temporarily removed and the lane re-opened.

It has been six months since a water main break in the Great Basin Water Company system caused the closure of a southbound lane on Homestead Road at the intersection of Highway 160 and while the utility is still not prepared with an engineering plan to fix the street, the county began work to temporarily reopen the lane on Thursday, May 17.

During the Nye County Commission’s May 15 meeting, commissioner Dan Schinhofen vented his frustration over the fact that the area had been languishing since November 2017. He then suggested a solution that would allow motorists to fully utilize the roadway until GBWC is finally ready to begin construction on the area.

“Since it seems that Great Basin Water Company is dragging its feet, can we cover up the top of that road with a chip seal so we can open it until they finally give us their plans and we can move forward?” Schinhofen asked of Nye County Acting Public Works Director Tim Dahl.

Dahl explained that he too had been thinking along those lines. However, just before he was about to put the idea into action, he received an email from GBWC stating the utility was in the last stages of finalizing their plans, which were 90 percent complete.

“They anticipate being able to submit to us a plan to move forward on or before, was their words, the first of June,” Dahl replied. However, he said he would be glad to reopen the southbound lane if the county desired him to do so.

Nye County Commission Chairman John Koenig chimed in, “It sure would be nice to do it.” Koenig added that he wants the entire community to understand that the county was not at fault for the situation, which was the responsibility of GBWC and that company has the duty of returning the road to normal.

Koenig also lamented the length of time that the roadway has been the subject of a cone zone, leading Schinhofen to respond that that was precisely why he wanted the county to draft an ordinance that would impose a time limit on road repairs to be made by utility companies.

These two were not the only ones to grumble over the intersection, with commissioner Butch Borasky obviously infuriated by the delay. “It’s very dangerous on that corner… It is just a matter of time before somebody is going to do some real damage to someone when trying to get around that corner,” he declared.

Schinhofen asked Dahl what the cost of cold mix to temporarily reopen the lane would be and Dahl said it was minimal, estimating less than a $1,000 price tag.

“Personally I don’t know if they are going to delay it further,” Schinhofen concluded. “I’m not going to say any more right now because it’s not an agenda item but I would like those figures brought to the county manager.”

No official action was taken at the meeting but just two days later, on May 17, Nye County Public Works road crews were on site with tractors and construction equipment, laying a layer of cold mix.

Nye County Public Information Officer Arnold Knightly said the southbound Homestead Road lane would reopen quite soon and would remain open until GBWC is able to submit its plans, have them approved by the county and begin construction.

As for the construction that must ultimately take place to restore the roadway to normal, a timeline is not yet available but GBWC is working to nail down these details.

GBWC was contacted for comment on the current situation and utility spokesman Tom Oakley explained, “We are working with the geotechnical firm Nova to finalize the report. We have some items and questions in the report for Nova before it is submitted to Nye County for review and approval. Our ops people are asking for clarification regarding the removal and recompacting of one section and if we can just leave in place and recompact for other sections. Once we have approval from the county, I’ll get back to you with specifics of the schedule.”