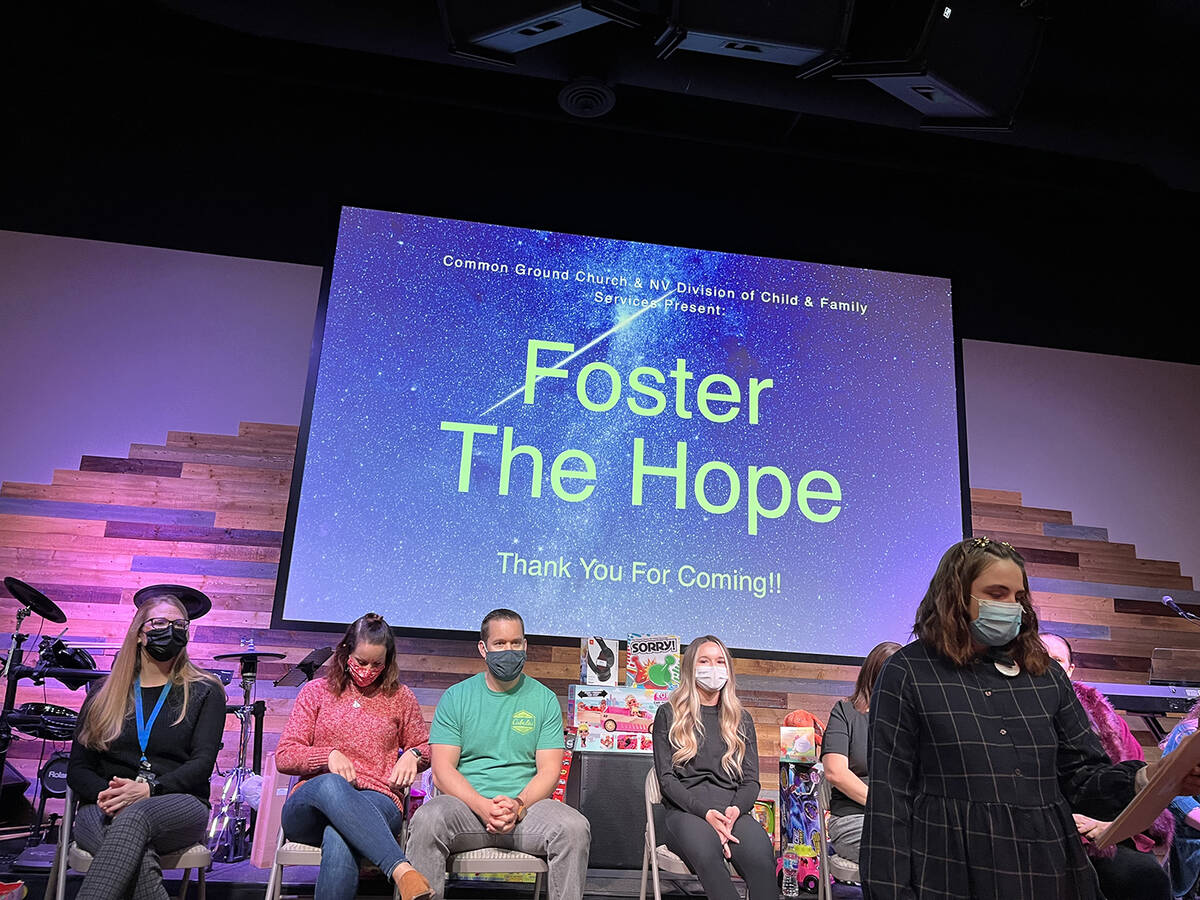 Special to the Pahrump Valley Times Courtesy of the Nevada Division of Child and Family Services, this photo shows participants at a Foster the Hope panel held in conjunction with Common Ground Church. A Foster Care Panel is set for June 25 in Pahrump.

There are many ways that a person can positively impact the lives of foster youth and this month, local residents will have a chance to learn all about the various methods of doing so during the Pahrump Foster Care Panel.

Hosted by the Nevada Division of Child and Family Services, or DCFS, the Foster Care Panel is intended to raise awareness about the need for foster families, particularly in the rural parts of the state.

“It’s a good opportunity to also learn other ways that you can help the foster care community in your area, if being a foster parent isn’t for you,” DCFS Rural Foster Care Recruiter Shelby Riley said. “Whether that’s through volunteering or arranging a service project, it’s just a great opportunity to learn how to help out in all kinds of ways.

“Some of our strongest and best foster parents really started their journey through this by being exposed to the foster care system in different ways, from volunteering at their church or doing a toy or clothing drive, or by being a CASA (Court Appointed Special Advocate). So there are ways to start learning what that system looks like without making that full dive to having it in your home 24/7,” Riley continued.

DCFS strives to host foster care panels on a quarterly basis in different locations around the state and its next is pegged for the Pahrump Valley next weekend. Riley said this particular panel also falls during a special observance for DCFS.

“This month, we are excited to highlight that it’s National Reunification Month,” Riley said. “So we are going to celebrate that as well, those successes from foster care, because really, the end goal for all of our foster cases is reunification, when it is safe to do so.”

Riley remarked that foster parents are a large part of reunification and play a vital role in ensuring youth are able to maintain strong ties with their families throughout the foster care process.

“They are a soft place for children and their families to fall while they’re healing. They are another person who gets to be in that family’s corner while they’re rebuilding their lives and they get to provide that mentorship and that stability that maybe some of these families have never gotten, during what is likely one of the biggest crises of their lives.”

Neglect makes up a large percentage of the reason that children end up in foster care, Riley said, noting that in most cases, the neglect is not intentional but is simply a result of crisis that the family is unable to handle. With the help of DCFS, foster care providers and others involved in the system, many of those families are able to readjust their lives for the better and give their children the proper parenting that they need.

There are around 400 youth in the foster care system in rural Nevada, which excludes Clark and Washoe counties.

In Pahrump, there are currently seven foster homes, the majority of which are regularly filled. When a new foster case comes up in the valley and a child needs to be placed in a foster home, DCFS faces the possibility of having to uproot the child from their hometown and relocate them elsewhere.

“When we’re talking about the rural areas, we can’t use any foster homes in Las Vegas, which I don’t think people realize. So we have to consider moving them as far away as Fallon, as Elko, as Carson City, clear across the state. And that is just a whole other set of trauma,” Riley said. “Not to mention that it makes visitation hard for the families as well.”

Riley said there is a need for foster care providers for every gender, age and need and noted that DCFS is open to all sorts of types of providers. “You can be married, single, in a domestic partnership. You can have boarders or roommates, as long as they are willing to go through some background checks and interviews too. So we are open to a a variety of what home make-ups look like,” she said.

The Foster Care Panel next weekend will feature Pahrump’s own Kathie McKenna, who heads Pioneer Territory Court Appointed Special Advocates. She will be representing the CASA program during the event and will be joined by foster parents, the Barlows, as well as a former foster youth, Leandrea Proulx. Licensing working Ben John-Rose will also participate, along with representatives from the social work and court sectors.

The Pahrump Foster Care Panel is scheduled for Saturday, June 25 from 11 a.m. to 1 p.m. at the NyE Communities Coalition. The panelists will be asked a series of prepared questions, after which the audience will have a chance to make inquiries as well.

“It’s free and open to the public, and there is absolutely no commitment!” Riley emphasized.