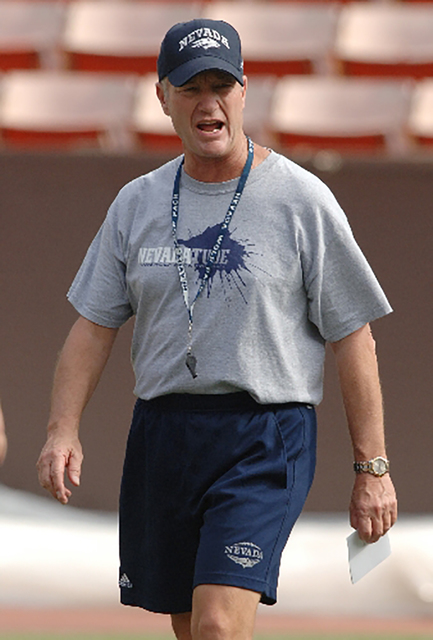 Chris Ault retired as the University of Nevada, Reno football coach in 2012 after 28 years coaching at the school. Last year he received $278,497 for his annualized pension payout, one of 1,605 retirees to collect six-figure payments in the state. Special to the Pahrump Valley Times

The number of pensions exceeding five figures is an increase of 37 percent over last year, the institute said in a press release announcing the data’s publication.

The data was obtained from the Public Employees’ Retirement System, which had more than 103,000 active members through fiscal year 2015. There were 51,853 retired and disabled members and 6,306 more beneficiaries and survivors, the agency’s annual financial report showed.

Retirement system Executive Officer Tina Leiss said all benefit amounts are set by statute and are a function of years of service and salary paid by each government employer. The actual average benefits are far from the examples in the statement, she said.

“The press release singles out seven individual benefit amounts out of over 55,000 beneficiaries,” Leiss said in an emailed response for comment. “These seven amounts are not representative of the total Nevada PERS retiree population, but all benefits are calculated in the same manner as set forth by Nevada law.”

The Legislature is largely responsible for the burden being passed onto today’s government workers, he said.

“Shortsighted legislators passed extraordinary enhancements, whose costs will take decades to unwind,” Fellner said. “Today’s workforce is now required to pay for these mistakes in the form of larger payroll deductions and reduced benefits. As a result, all three stakeholders — employers, taxpayers and workers — would benefit from reform.”

The Nevada Legislature modestly changed the retirement system to reduce costs in 2009 and 2015. But a GOP lawmaker’s push to change the plan from a defined benefit pension plan to a defined contribution plan was rejected by lawmakers in the 2015 session despite Republican control in the Legislature for the first time in decades.

A defined benefit plan is a retirement account that promises a set payout when a worker retires. In a defined contribution plan, like a 401(k) or 403(b), workers and their employers can contribute but there is no set monthly benefit upon retirement.

In 2015, Senate Bill 406 established a minimum retirement age of 55 for regular public employees with 30 years of service, and raised the number of years to retire at any age to 33.3. The bill, which affected new hires starting July 1, 2015, also eliminated the ability to use purchased years of service to count toward retirement eligibility.

The Clark County School District is the largest government entity participating in the Public Employees’ Retirement System, with 29,596 cover employees in 2015. The state of Nevada was second with 14,770 followed by Clark County with 7,040.

The data are available for perusal at transparentnevada.com.