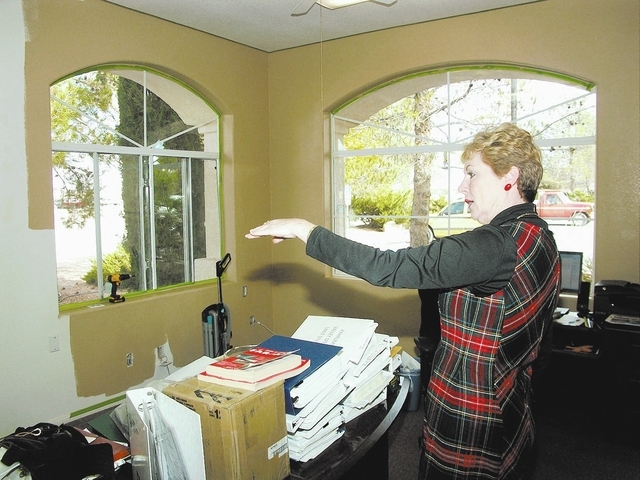 Regular visitors to the Pahrump town office will notice an entirely different interior design this week.

Buildings and grounds crews are in the early stages of a remodeling project.

The work, according to town officials, will allow the office to run more efficiently for the benefit of the public and staff.

Part of the process has Town Manager Susan Holecheck in slightly smaller confines as she conducts her day to day duties.

Holecheck said the renovation will also provide an element of privacy for employees who work with sensitive information during regular business hours.

“What really precipitated this is that we have three ladies in our office that do ambulance billing. Because what they do involves health related aspects, which is covered by the Health Insurance Portability and Accountability Act of 1996 (HIPAA). The problem is that any violation can result in a $10,000 fine for each occurrence. They really need to be in a secure place where no one can see the records that they are dealing with and no one can hear them on the phone. I take this very seriously because people’s health information should not be shared with anyone else,” she said.

Holecheck said due to the design and layout of the office, the employees worked in an area where anyone within an earshot could overhear sensitive information relayed to callers over the telephone creating an environment where the information could be compromised.

“These individuals were basically out in the main area with two of our other staff members and people were walking by. Arguably somebody could say somebody is looking at their medical records and that was my first concern,” she said.

Holecheck said she had additional concerns including the cost of the project.

The town manager was not interested in spending a large chunk of money to get the job done right.

She decided to ‘take one for the team’ and relinquish her spacious office for the modest confines of a much smaller work space just down the hall.

“I thought about how I could get them a secure place to do their work and yet not spend a lot of the taxpayer dollars. The best way for me to do that was to give up my office. I don’t care where I sit. Just give me a desk and computer and I’m good. All three of the ambulance billing ladies are now in what used to be the town manager’s office. It’s a secure area and they can close the door when they are on the phone. For me, it was really an important move,” she said.

The move extends to the annex building, which is just a stone’s throw from the town office.

Holecheck said the annex building will be occupied by the director of tourism once the dust has settled.

“We also thought about really pumping up tourism, so we actually moved Arlette Ledbetter to the town annex which will be her own tourism bureau, and she is pretty excited about that. Our parks and recreation crew are doing this so, again, we are really watching the tax dollars. The last time the interior of the building was painted was six or seven years ago so we are also getting a fresh look. Our parks and rec crews are phenomenal,” she said.

For many years, the town annex building was the main venue for a few of the town’s advisory board meetings.

Holecheck said that some of the meetings that occur during business hours will most likely be held at the Bob Ruud Community Center’s Room “B.”

“The advisory boards can still use it — particularly at night when Arlette is not there. We are hoping that they won’t mind going to the Bob Ruud,” she said.

Pahrump Buildings and Grounds Supervisor Matt Luis said the annex project is a relatively simple one that should not take a lot of time to complete.

“We’re just going to add an additional partition wall to kind of break the room in half. Other than that, it’s pretty simple and we have already started the move. We are also painting the offices at the same time, which haven’t been painted for quite some time and was a little overdue,” he said.