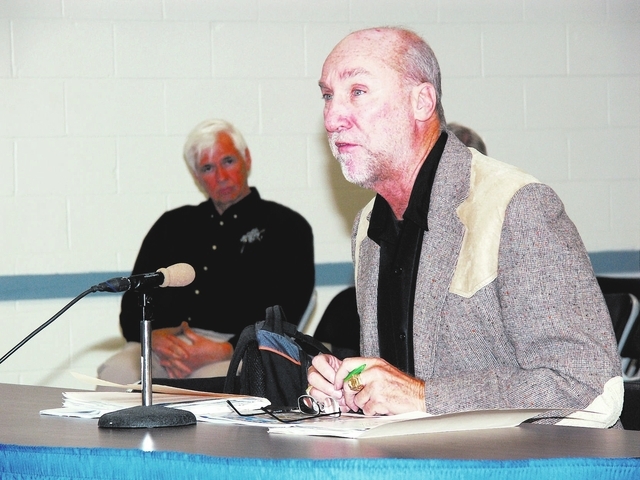 Exactly six months from today, local residents, town officials and area businesses will learn if a Pahrump sponsored motorcycle rally was worth the effort.

Last week, Pahrump Town Board members voted to approve the “2014 Base Camp to Adventure Rally,” scheduled for June 20-22, at a sum not to exceed $38,700 for the exclusive rights to sponsor the event.

Roadshows Inc., the company putting on the rally, is touted to be one of the largest event producers of motorcycle festivals in the United States.

Public reaction following the approval was swift and certain by virtue of the numerous comments made by readers on the PVT’s website pertaining to the issue.

A majority of the comments were less than welcoming from those who shared concerns about security, costs and liability on the part of the town.

Contained within the agreement, the town will be responsible for such amenities as staffing parking areas, vendor registration and garbage collection, as well as providing assistance in marketing and advertising.

Roadshows Inc., meanwhile, will be responsible for the overall “nuts and bolts” of the endeavor including general liability insurance coverage and compensation to individuals who are retained to perform services at the event other than those employed by the town.

According to the agenda backup material, both the town and Roadshows Inc., must maintain insurance coverage by an authorized company in the State of Nevada with a combined single limit coverage of at least $ 1 million per occurrence provided for bodily injury and property damage.

The coverage also includes an indemnity clause where each party agrees to hold harmless the other party against any loss or expenses resulting from the failure to perform or observe any of the terms of the agreement in connection with the rally.

Though it’s still too early to determine if the event will be a success, according to the initial budget agreement, the town alone stands to make $13,000 in profit.

Local businesses may also reap the benefits of increased volume.

Still, it was not worth the investment to Town Board member Amy Riches who invited Nye County Sheriff Tony DeMeo to attend the special meeting last Tuesday.

Riches said she feared the town could still be held liable in the event of a serious mishap occurring on town-owned property.

“If we sponsor this event, and God forbid something happens where somebody gets hurt, can the town be sued?” she asked.

Town Manager Susan Holecheck responded to Riches’ query by suggesting that litigation is always a possibility in virtually any setting.

“It depends where they are and whether they are on our land. There is really a lot of factors but the quick answer is that anybody can sue anybody. It may take a lot of time and money to get out of a lawsuit and that is unfortunately what’s wrong with our judicial system but it would depend on what the scenario is,” Holecheck replied.

Riches’ concerns came about after DeMeo told the room that his department would be hard-pressed to provide adequate security if the event even remotely resembled what happened in Laughlin, Nevada during the “Laughlin River Run” more than 10 years ago, when members of a notorious motorcycle club violently confronted members of a rival club.

The aftermath resulted in three deaths.

Law enforcement in the tiny city of more than 7,300 residents were forced to call in reinforcements from surrounding tri-state agencies to deal with the melee.

It should be noted that the Laughlin event was not a Roadshows Inc., sponsored rally.

Roadshows Inc.’s Randy Burke told the board how officials in Laughlin and other locations made changes to the annual event after the 2002 incident.

“You can’t take any of that back and we have always been proactive in our productions. I know in Laughlin now, there are no ‘colors’ inside of all the casinos which means the clubs cannot wear their colors inside and that’s true in Reno and Sparks. In Daytona Beach and Milwaukee, there’s no colors allowed. That is one of the tools being used to control about 1 percent of the motorcycle enthusiasts’ population. We do not market to the motorcycle clubs, everybody’s welcome to come to a destination resort and have a good time,” he said.

On the issue of public safety, Fire Chief Scott Lewis said overall, his department is prepared to handle whatever the rally brings next summer.

“As the proposal progresses, it will give us a better handle on what our responsibilities might be and what the scope of that will look like in the end. We have had these influxes with different events in the town and I think we would have sufficient resources available,” he said.

Following more than an hour of discussions, Town Board chairs Harley Kulkin and Bill Dolan voted for the item, as did member Dr. Tom Waters.

Members Bob Adams and Amy Riches did not offer their respective support for the event.