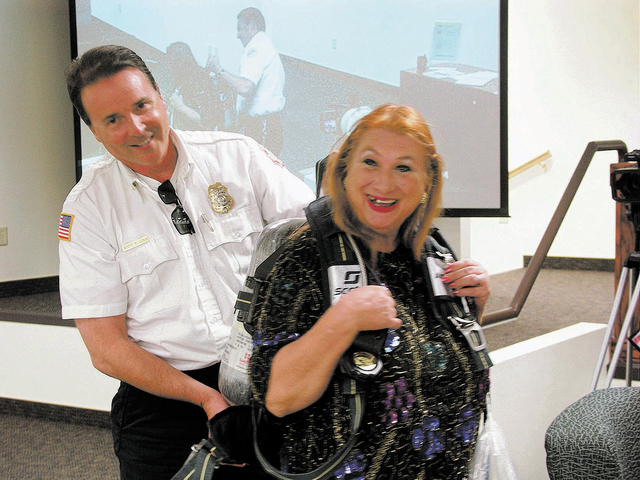 All five Pahrump Town Board members were in agreement with providing Pahrump Valley Fire and Rescue crews the equipment to safely get their jobs done.

The board voted unanimously on Tuesday to approve spending $38,498 for the replacement of what’s known as a Self-Contained Breathing Apparatus (SCBA) used by the fire department.

Chief Scott Lewis told the board a federal grant will be used to pay for a majority of the costs associated with the equipment.

“This is the Assistance to Firefighters Grant which is a FEMA-sponsored grant. It is highly competitive and very difficult grant to obtain,” he said.

Lewis said the SCBA is one of the many pieces of equipment his department uses on a regular basis, especially when responding to structure fires and other emergencies where fresh air is compromised.

“That particular unit is what we wear into any situation where there are immediate dangers to life and health. It basically contains purified breathing air that allows us to go into hazardous environments whether it be a fire scene, an automobile fire, or a Hazmat related incident or anything where the air quality may be dangerous to our firefighters,” he said.

The SCBA system is not cheap.

At present, the department has 50 air packs and 100 bottles of oxygen.

“We were facing an insurmountable expense coming up within the next year. Our former SCBA was nearing its 15-year life span. Those bottles are attached to a cylinder that costs about $1,000 per unit. We were facing an expense of $100,000 on the old unit, not to mention the former equipment was subject to numerous lawsuits and was also named in a number of firefighter deaths. There were many challenges facing our organization at the time we were looking to seek these grants,” he said.

The fire chief also told the board that the amount of the original FEMA grant has since changed from the time it was first submitted last year.

He used what’s known as a Government Purchasing Organization (GPO) to obtain a better price for the breathing units.

“At the beginning of April 2013, we were notified that we had received the grant, however, the initial grant request was for over $322,000 in order to complete the scope of the project. FEMA reduced the value of it to $287,000 and change. The GPO allowed us to seek and acquire a great discount in the same type of equipment that we were looking at from the very beginning. By utilizing the GPO, we were able to acquire the equipment with an additional $5,564,” he said.

Following a brief discussion the board voted 5-0 in favor of providing 10 percent of the total costs for the new equipment.

Following Lewis’ presentation, he provided information on the end of the seasonal burn ban for town residents.

The ban will be lifted on Nov. 4, with the normal restrictions.

“Anyone who is need of a burn permit can come by the town office. They should be prepared to show proof of ownership of the property,” Lewis said. “If they are a renter, they still need to have the owner of the property provide a notarized letter or come in to get permission to burn.

“The state is really steadfast on their position on the materials burned. We are challenged to strictly enforce not only our ordinance but the state’s law on open burning. It will be natural waste vegetation only. They won’t allow household trash and other processed materials that may place potential carcinogenic matter into the atmosphere which can cause ailments with our folks in the valley who have respiratory problems,” he said.