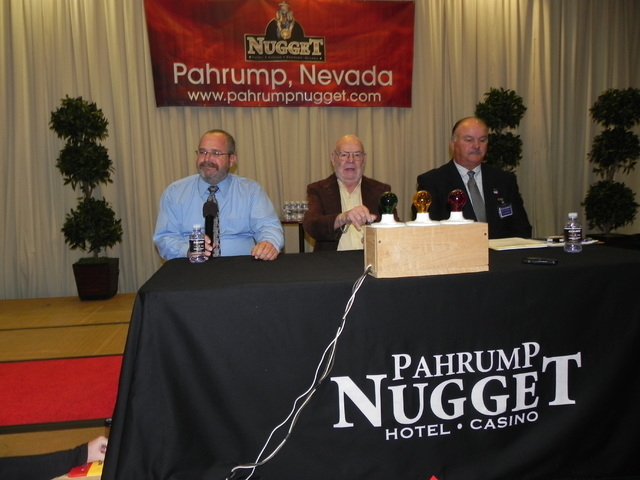 Nye County Commission Disrtrict 5 candidates tackled issues ranging from acquiring utilities, to taking over the functions of the Pahrump Town Board, to expanding a red light district, during a candidates’ night at the Pahrump Nugget Hotel and Casino on Tuesday.

Schinhofen, a Republican, said in his first term he got nine counties to sign a resolution asking the U.S. Department of Energy to complete the science on Yucca Mountain.

Retiree Bob Howard, a Democrat who has lived in Pahrump 25 years, said it’s the first time he’s run for office. He worked for the federal government for 30 years.

“I want to see something done about this flood problem we’re going to have, just luckily these five hurricanes didn’t come far enough north,” Howard said. “The other thing I want to work on is see about getting a park-and-ride system between here and Las Vegas.”

Former County Manager Rick Osborne said he spent 25 years in law enforcement and spent seven years as administrator for the city of Talmidge, Ohio. He moved to Pahrump to take the county manager job in 2008 to 2012.

Candidates were asked if there will be a Pahrump town advisory board when the elected town board goes away Jan. 5.

“I said publicly many times I think we should have an advisory board,” Schinhofen said.“It will be good to see people who can see those issues first and can sort through them before they come to us.”

Howard said he doesn’t want to dissolve the town itself.

“Let the city exist as it does today and let county commissioners make any decisions that affect money or personnel or things like that,” Howard said. “Let’s sit down in January at a workshop where we can get ideas.”

Osborne supported the idea of an advisory town board similar to others already existing in Nye County.

“It works in a lot of other areas and I don’t see why it won’t work here,” Osborne said. “I know there were some deep-seated problems that arose over time when I was a county manager here.”

Schinhofen said there is a study underway to advise the county on a potential acquisition of the Binion Ranch, leading to a discussion if the 138-acre site should be developed into a fairgrounds.

“I wasn’t willing to make a vote on $2.2 million without any backup,” Schinhofen said about the Binion Ranch purchase. “The fairgrounds itself is very workable, there’s three great ideas I’ve identified for retention basins to continue the work I started as flood control.”

He said the Binion Ranch should be addressed first by the Pahrump Town Board.

Howard said the Binion land should be developed by investors into a small industrial center or shopping complex to bring economic development to the Pahrump area.

On water, Howard said it’s one of his favorite subjects and the county should strive to maintain its rural lifestyle.

“You drive into Vegas and the first complex you see after you get down around Durango (Road) are those three-story houses, all right next to each other,” Howard said. “We don’t want that in Pahrump and if anything, I would increase the minimum lot size… (to) no less than a third of an acre or a half an acre and preserve our water.”

Osborne said a lot of people think government entities are trying to take their wells away from them. “If I’m elected I’m going to fight that tooth and nail I don’t believe government should be taking away property rights from people.”

Osborne said too many homes were planned for the water resources available. “We’re going to have to rethink that whole thing. I think there’s 20,000 to 30,000 homes on paper there probably isn’t water resources for.”

“If the county commission voted to cap our wells we’d have to cap our own. Nobody’s capping my well,” Schinhofen said. He said there’s room for large subdivisions in Pahrump like Artesia as well as one-acre lots.

Howard wants someone to drill a deep well through the carbonate aquifer to find out if there’s water.

Schinhofen said he voted twice to acquire private utilities. He said the county has expertise having run 19 utilities. One was the acquisition of Pahrump Utilities Company, the last one was a $4.5 million donation of a water and sewer plant by Spring Mountain Motor Sports. Both were rejected by a majority on the commission.

When companies like Utilities Inc. of Central Nevada want to raise rates, residents have to travel to Las Vegas for Public Utilities Commission hearings, he said.

“If the county or the town owned this municipal water system, if your rates were going to be raised they’d be all here where you come and talk to us anyway, it’d be local and not a private company, you don’t get to vote who runs that company. If a municipal owns it you vote us in or out, so you would own those utilities,” Schinhofen said.

Howard said the county should’ve taken over Pahrump Utilities Inc. and the other two private water companies in Pahrump Valley. The Hafen family offered to operate Pahrump Utilities for the first five years, he said.

Osborne said, “I’m not convinced we have all the skills, knowledge and the ability to operate one of those systems.” It would involve operating the sewer, not just the water side, he said.

Osborne questioned the $5 million price tag to acquire Pahrump Utilities Company, he said there wasn’t a true evaluation of the cost.

To tackle deficits, Osborne advocates a performance-based budget in his platform.

Howard was concerned about the money spent on the new jail.

Schinhofen touted cuts during his tenure.

“We’ve cut $5 million and 61 employees during my last four years, we’ve cut our costs,” he said. “It’s the revenues we’ve got coming in and everybody knows it’s property values that have sunk. So we’ve done our best and balanced our budget every year.”

“We haven’t raised taxes to hire more people, we’ve lived within our budget and I will continue to do that,” he said.

Moderator Bill Carns tossed a curve with a question about expanding the brothel district at the south end of Homestead Road.

“I am totally, unequivocably opposed to expanding the red light district. It’s ridiculous. There’s enough business down there we don’t need it. Why don’t you just open up the whole town?” Howard said. He added however with legalized prostitution there aren’t working girls at the casinos and on the streets.

“If businesses come in here and they want to invest their money in that I would consider looking at that,” he said. “It’s quite a substantial investment, some of the codes and ordinances I’m going to bring forward, if there are any new brothels built they’re going to have to be built to very good standards, no manufactured trailers brought in and fifth wheels.”

Osborne said the brothels didn’t cause any trouble when he was county manager.

“I don’t know of any issue that’s’ ever come to the board created by the working girls,” he said.