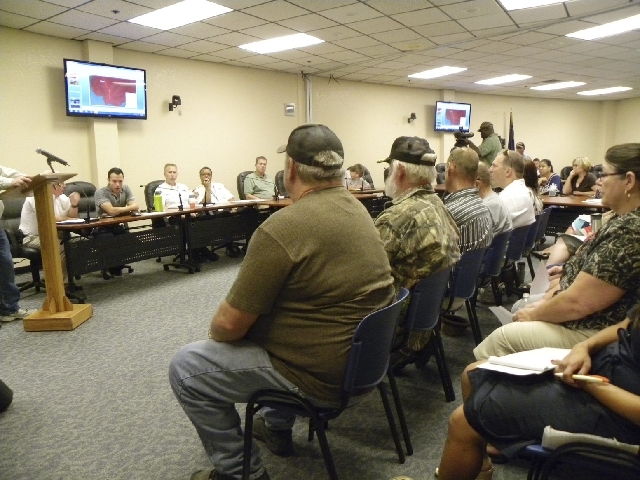 More than 20 days after the Carpenter 1 fire forced Trout Canyon residents to evacuate their homes, the small canyon community is still without running water.

Trout Canyon residents gathered at the Southern Nevada Health District in Las Vegas Friday morning to hear a presentation from members of the health district, Clark County and the U.S. Forest Service on the state of their fire-damaged water line and what options they had to fix or replace the more than 50-year-old system.

Currently, Clark County Emergency Management is bringing in large tankers of water to provide some water access to the community and has also provided portable restrooms and showers as a temporary solution to the problem. While they may work for now, both residents and county officials said that won’t be an option forever.

Nate Diaz, the primary inspector for the safe water drinking program with the Southern Nevada Health District, told meeting attendees there were more than 80 unique issues with the water line after it suffered severe damages as a result of the Carpenter 1 fire.

“In total, with the previous set of deficiencies that I had listed on that first map, there was a total of 82 unique spots where there were cracks, deviations, kinks, any type of deformity that you could think of,” Diaz said. “Up in this area (referencing a map) there was just a consistent probably 15 feet of dent after dent after dent, so I didn’t take a GPS pinpoint of every one, I just put in my logs there were 15 plus events. So you’re looking at 82 plus areas that would have to undergo some kind of fixing.”

The 55-year-old, privately owned line, made mostly of War II-era munitions canisters, faces other problems too, according to the report, including supports that were washed away in flash flooding in the area and parts of the line that are now exposed since the fire consumed much of the vegetation previously covering it.

Diaz added that the gate valve at the mouth of the cave spring that feeds the community may also have been welded shut in the flames.

Although much of the line suffered damages in the wildfire, the good news for residents was that if it could be fixed, the inside appeared to still be in working order.

“If you can recover it, and there aren’t any holes, and it’s able to hold water and not leak it, then yes it’s still fine,” Diaz told residents. He added, however, that with the number of issues and the age of the line’s pieces, repairing the line may be difficult.

Dennis Campbell, a Southern Nevada Health District environmental health manager, said at this time the division is considering the entire line to be compromised.

“Unfortunately, this system is 55 years old, so at the time the safe drinking water act was implemented, this system was essentially grandfathered in. At this point in time, the entire distribution line has been completely compromised, so we’re going to have to go back and look at bringing that distribution line into compliance with current regulations,” he said.

“Now does that involve switching out pipes or maybe just replacing those sections that have been compromised and protecting it? That’s something we’ll have to be looking at. It comes down to how are we going to pay for it,” he added.

The biggest hurdle facing residents, whether they are looking at a temporary or permanent fix to their water problem, seems to be funding for the new line.

One resident at the meeting told officials close to a decade ago when the community had put a bid out for a new line that would be up to code, the estimate they got from a construction company in Pahrump was around $3 million.

With inflation and other factors due to the fire, Shane Hastings of the United States Department of Agriculture Rural Development, said it could cost even more than that to replace the line now.

Though the community may not be able to pay for the project out of pocket, several agencies have stepped up offering possible grants or at the least fixed rate loans to help the community fix their water problem quickly.

Both Hastings and Jennifer Carr with the Bureau of Safe Drinking Water for the EPA said they could provide loans to the community to help them finance the water line project.

Though funding may be available, the first step in fixing the problem, officials told the present residents, is for the community to come together and design a plan that can be submitted for review to the Bureau of Safe Drinking Water and the Southern Nevada Health District for approval.

Officials at the meeting said they would help the residents as much as they could in their respective capacities, but they needed the community to come together to help solve what is essentially Trout Canyon’s problem.

While some residents were upset officials didn’t supply them with a solution to the water problem, others seemed inspired to begin planning as soon as the meeting concluded.

Trout Canyon resident Dennis Walker said he was upset by what he felt was a lack of support, saying he was concerned about many of the senior citizens living in the area who were struggling without water in their homes.

“There are senior citizens struggling to carry a five-pound bucket from the tanker to their homes,” he said. “We’re still in crisis until we have water in our homes.”