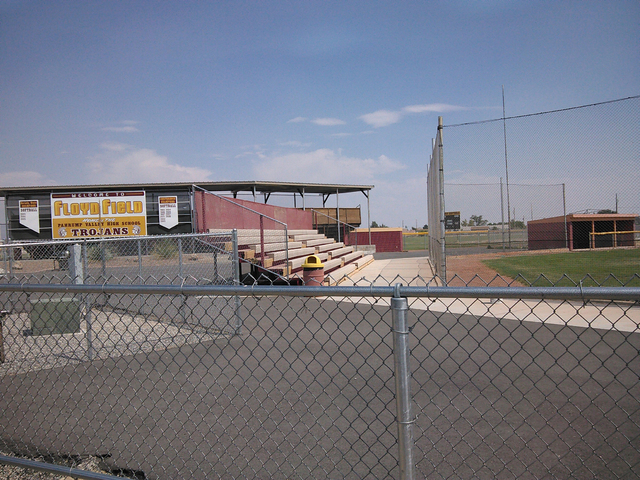 Pahrump Valley High’s baseball diamond will have a new look when the “Boys of Summer” return next spring after the Nye County School Board approved putting the renovation project out to bid.

Maintenance Supervisor Cameron McRae said this week that the upgrades are two-fold as the main focus at present, is renovating the entire backstop area, where the nylon netting has become too rotten and tattered to remain effective.

The lack of shade for spectators was also a factor.

McRae provided the board with three options to remedy the problem, all with varying costs and design fees.

Board members approved installing a 16-foot chain link fence behind home plate, installation of new poles between the existing backstop poles as well as install what’s known as a pole barn shade structure, measuring 20 feet by 64 feet, which will edge up against the new backstop.

McRae said that option fully protects spectators and provides shade for those sitting behind home plate.

“We are gaining the desired effect of having a shade cover for those sitting behind the backstop,” he said.

McRae hopes to have the upgrade completed before next season.

“We are hoping that the new backstop and shade structure will be completed by December 30,” he said. “It will be ready for baseball season next year unless something unknown comes up but at this point the architect doesn’t see any issues.”

Once the fencing and shade portion is complete, McRae said much attention will be focused on getting the outfield ready for play – which is when players and volunteers have agreed to perform most of that work.

“There will be a lot of work to be done and we will need a lot of hands,” he said. “That’s where the parent support group baseball team itself will be needed on the project.”

McRae also said he’s located the source of the holes and efforts have been underway to mitigate the problem caused by the common gopher.

“When we go out there now to inspect the fields we might not have any signs of rodent holes for a day or two, where before, every morning we would go out and there would be another half dozen gopher mounds within that field. I’ve had a staff person every morning, walk the entire softball and baseball field and take an action to get them.”

McRae also said efforts are underway to address an apparent irrigation issue where some areas of the grass remain green while other parts die off due to lack of water.

“We have done all the searching, removing and repairing the irrigation infrastructure,” he said. “We’re leveling, setting up, raising and lowering sprinkler heads so that we can try to get the water to the areas that were in question. The last work that was done on the baseball field was 2000 and 2005 when they reversed the baseball fields. There has been no major work done to those fields since then.”

Another important element McRae addressed was the second phase of the project where players and parents will take part in the outfield upgrade.

“Be it a volunteer, a student or whatever, we have to be sure that they are capable and able to do all the things and be safe,” he said. “It’s a very big liability. Volunteers, if they don’t know what they are doing, can get hurt and that’s never good.”

In April, parents, players and supporters of the program packed the school district’s board meeting, urging trustees to take action on upgrading the facility.

Their main gripe was the condition of the outfield and the diamond’s backstop.

During that meeting, parents complained the unevenness of the field along with numerous holes in the turf endangered the players to the point of causing injuries.