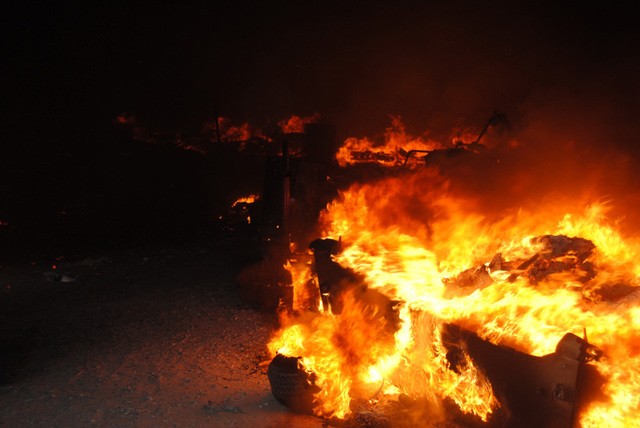 Pahrump fire crews, hampered by high winds, responded to an early morning structure fire along Quail Run Road this past Monday. The fire destroyed a motorhome, at least two travel trailers, boats and car parts just after midnight. Though no injuries were reported, the cause of the fire remains under investigation. Special to the Pahrump Valley Times 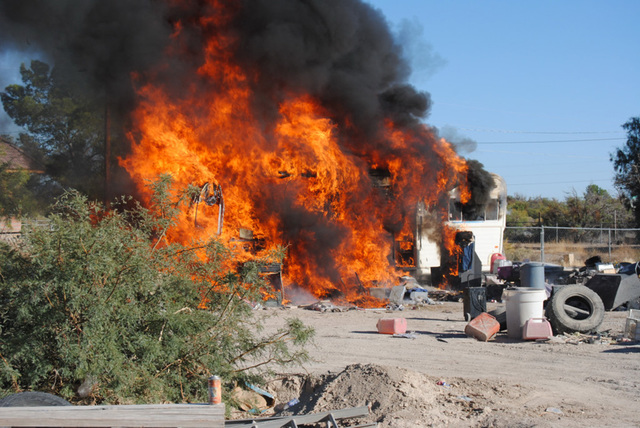 A fire on the 1000 block of Windsong Lane on Tuesday, Oct. 10, destroyed a travel trailer and additional personal items on the property just after 3 p.m. The fire was in close proximity to a neighbor’s property as well as several accessory buildings. One person was medically evaluated for smoke inhalation. The cause of the blaze remains under investigation. Special to the Pahrump Valley Times

High winds presented a challenge to Pahrump fire crews as they battled an early morning structure fire at a property on the 3700 block of West Quail Run Road this past Monday.

As a result, numerous structures, a boat and two travel trailers, along with various automobile parts, were destroyed in the fast-moving blaze.

Fire Chief Scott Lewis said the winds were pushing the fire toward mesquite and salt cedar groves, as well as a large pile of stacked tires.

He noted that no injuries were reported, as crews worked to extinguish the fire.

“Crews commenced a quick defensive exterior attack using a master stream appliance of large amounts of water,” he said. “They quickly controlled that fire without further extension on the property of origin. We estimate there was a motorhome, at least two travel trailers, boats, car parts that were burned within that fire.”

Lewis also said though the property appeared to be vacant, there was evidence that people were living on the property at one time or another recently.

“We believe that the property was idle and vacant,” he said. “At this point, the cause of the fire is unknown but we are continuing our investigation. It’s hard to determine the cause due to the severity of the burn that occurred. There was a significant fuel load and high winds, which created additional challenges.”

Gusty conditions throughout town over the weekend also hampered the efforts of fire crews as they responded to a large brush fire on the 1700 block of South Vista Street last Friday just after 12 p.m.

Lewis noted the initial dispatch for a brush fire was reassigned to include structures.

“Upon arrival, we found a very fast-moving ground cover fire that had extended onto a neighbor’s property, where it was threatening multiple structures and eventually started a hay fire within a hay barn,” he said. “That hay barn and a tack shop was also damaged, as well as two idle travel trailers were burned on the property of origin.”

Aside from the high winds, Lewis said the fire crew’s efforts were hampered by thick smoke.

“We actually had blinding smoke even though we were on the exterior, and not within the house,” he said. “The smoke was so thick and came down so low due to the high winds, that we could not see our hands in front of our eyes. In that type of situation, you get as low as you can and feel your way back.”

Numerous animals on the property were relocated.

There were several horses, cattle and some waterfowl, which had to be removed during the suppression,” he said. “Nye County Animal Control was called in and the officer sustained smoke inhalation as result of their efforts.”

Lewis said the makeup of the ground cover contributed to the tenacity of the blaze as fire crews battled the fire for at least seven hours.

He noted that built-up organic materials on the property made for additional challenges for fire crews.

“We were out there from the time of dispatch, which was just after 12 p.m., to 7 p.m.” he said. “During the course of the weekend, we were out there approximately 10 different times for small resurfacing ground-cover fires from that same type of material. It was estimated in some areas to be several inches thick and up to six inches in a lot of the areas.”

Lewis said an individual working outside may have accidentally started the fire.

“That fire was started by the original property owner, who was using a grinder and didn’t realize that he had ignited materials behind him. When he turned around, it was off to the races. It’s been a little while since we’ve seen that kind of situation but it does happen, especially for those who own horses and cattle. The material builds up in their pens, and there’s an introduction of an ignition source and it’s very, very difficult to control and extinguish.”

Last week, fire crews were dispatched for several fires throughout the community.

On Monday, Oct. 10, Lewis said crews responded to a rubbish fire on the 1300 block of Pocahontas Street, which was quickly extinguished with no exposures to structures.

The following day, crews were summoned to the 1000 block of Windsong Lane for another structure fire just after 3 p.m.

“Upon arrival, we found a well-involved trailer to the rear of the property,” he said. “The fire was extending to the nearby storage of personal property and it was also in close proximity to a neighbor’s primary dwelling, as well as several accessory buildings.”

Lewis said crews commenced an exterior attack and were able to quickly control the fire without incident.

The cause is under investigation.

“There was one civilian injury who was transported to the local hospital for smoke inhalation.”

On Wednesday, a faulty home appliance prompted residents on the 2600 block of North Blagg Road to call 911 just before 3 p.m.

“Upon arrival, crews found light smoke showing and their investigation revealed that it was actually a dryer fire within the residence,” Lewis said. “It was quickly controlled and that appliance was isolated. There were no further extensions to the dwelling. It appeared that there were indications that the drum inside the dryer compartment separated, probably due to age.”

On Sunday, October 16, fire crews were dispatched to the intersection of Pahrump Valley Boulevard and Gamebird Road for a motor vehicle crash just before 3 p.m.

“It was a single motorcycle accident where the rider laid the bike down,” Lewis said. “He lost control of the bike while negotiating a turn and was subsequently transported to the local hospital.”