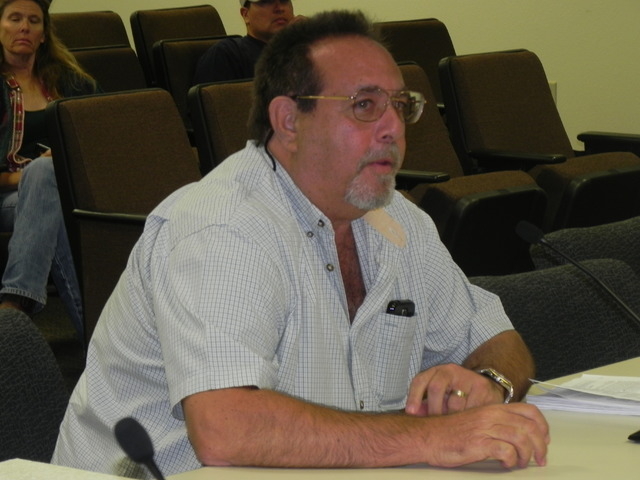 A pair of solar, photovoltaic projects are planned on the far north end of Pahrump by a start-up company called Belaluz Solar LLC.

The Pahrump Regional Planning Commission last week recommended approval of a master plan amendment and zone change from village residential to rural homestead residential for Belaluz Solar for a 76-acre tract at 6631 N. Sharpe Ave. and 6630 N. Crest Ave., which is near Parque Avenue, a couple of miles east of Highway 160. The application included a waiver of landscaped buffers.

The project will generate 15 to 18 megawatts of power, enough to power 2,000 homes, according to Belaluz.

Company founder Randall Bell said his company is planning another project on 75 acres at 7180 N. Highway 160.

The two projects could employ 100 construction workers, he said.

Belaluz looks to start construction in six to seven months, it will be an eight-month building project, Bell said. The project is on private property, which he said exempts them from requiring U.S. Bureau of Land Management approval he said. The property owner is Lindkvist Trading Company. Belaluz is also exempt from Federal Energy Regulatory Commission (FERC) requirements as a project under 20 megawatts, Bell said.

Belaluz will require permits from Pahrump Valley Fire and Rescue Service, the Nye County Sheriff’s Office and from the Nevada Department of Transportation for traffic impacts while the project is under construction, Bell said.

The Sharpe Avenue project is a half-mile from the Valley Electric Association Vista substation on the far north end of Pahrump where Belaluz plans to connect, Bell said. The power will be sold to utilities in California, Oregon and Washington, he wouldn’t disclose, though Valley Electric will have the first option to purchase the generated electricity.

When Valley Electric Association was contacted for input, the utility seeemed unaware of the plans.

Nye County Planner Beth Lee said there will be a perimeter fence around the solar panels, the property meets the minimum lot size of the requested zoning district, the zoning use is appropriate for the area and the project won’t deplete natural resources.

“It’s not going to be open to the public, it’s not along a roadway that is traveled on a regular basis, it’s not around a residential area. We approve the waiver for common sense reasons, they’re not going to be drilling a well, we didn’t see the point in requiring a well or exterior landscaping,” Lee told planning commissioners.

The only questions came from RPC member Bob King who said the property doesn’t abut existing residential development, but there is property zoned residential in the area.

“There is every possibility that tomorrow someone could pull permits to build a house next door,” Lee replied.

When it came to water use, Bell said a truck will wipe down the solar panels on a monthly basis. Belaluz will have to do a hydrology study, he said.

“It’s a $25 million project and that’s going to cost us over $50,000 and before we invest that money we want to make sure we can put the facility there. But there will be a drainage study done,” Bell told the RPC.

The Pahrump area has been touted before as having among the best solar radiation in the country.

When asked by the Pahrump Valley Times why he chose Pahrump, Bell said, “it could be in my opinion, the solar capital of the world. The registration of the sun right there is as my people say, ‘off the chain.’ It’s fantastic every day of the week, almost all year round and I’m very pleased with the commissioners and everybody to help get these two projects off and started and the planning department has been fantastic with me.”

Bell said his development partners are a company out of New York named Solops LLC, which owns and operates 10 solar plants across the country.