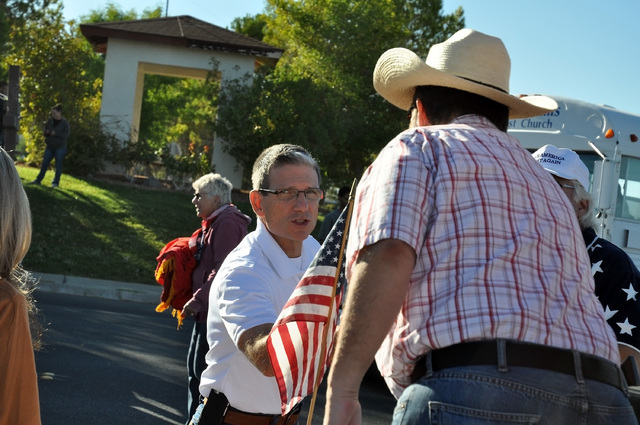 U.S. Senate candidate Joe Heck stopped at the Pahrump Fall Festival at the invitation of the Nye County Republican Party on Saturday.

Heck, a Republican who represents Nevada’s 3rd Congressional District, has been traveling across Nevada and meeting voters to identify their concerns. He said several issues cut across the entire state.

“As we’ve traveled around, the issues that come up time and time again, people are still concerned about jobs and the economy, they are concerned about national security,” he said. “They are still worried about whether or not their child is going to get a good education or if they can get access to quality health care.”

Heck, from Las Vegas, will face with former Nevada Attorney General and Democratic opponent Catherine Cortez Masto for the seat of the retiring Harry Reid. The race is among most closely watched around the country and presents a rare opportunity for Republicans to get the control of the U.S. Senate.

“I’d like to see more of Nevada’s federally-controlled lands returned back to local and state control. I think it’s important to have local and state stakeholder input in determining what should happen to the land that’s within our borders,” he said.

Ahead of the parade, Heck was shaking hands with local officials and answering questions from residents. His wife Lisa Heck accompanied him during the visit.

Heck said he is opposed to ballot questions 1 and 2 that would expand background checks for private firearm sales and legalize recreational marijuana, respectively.

“I have concerns from a public safety perspective of recreational marijuana,” Heck said.

The criminal justice issue can be addressed separately without legalizing recreational marijuana, he argued.

“You don’t need to put somebody in jail who gets caught with one or two joints. That’s a criminal justice issue that can be addressed totally separate from the debate as to whether or not marijuana should be made legal,” he said.

On Question 2 he said: “I believe that the Second Amendment right of the law-abiding citizens should not be abridged and I believe that Question 1 goes too far and that the last segment of it that talks about the temporary transfer of firearms or the transfer of firearms between two private individuals has restrictions in it or requirements in it that would be very hard to enforce.”

Heck, who has successfully defended his seat in a Democrat-leaning district, once again reiterated his support for Republican presidential candidate Donald Trump.

If elected, Heck said he will work on setting the conditions for the private sector to create jobs, providing access to quality health care and education.

Heck said one of the pivotal points for him will be providing benefits for veterans. In Nye County, Heck said he will have to do an assessment of VA facilities and look for gaps.

Heck heads subcommittees of the House Armed Services and Intelligence committees and also sits on the Education and Workforce Committee.

A physician and a brigadier general in the U.S. Army Reserve, Heck has been called to active military duty three times, including a 2008 deployment to Iraq, where he ran an emergency room in a combat hospital at the Al Asad Airbase west of Baghdad.

Cortez Masto will be the first female Hispanic U.S. senator if elected.