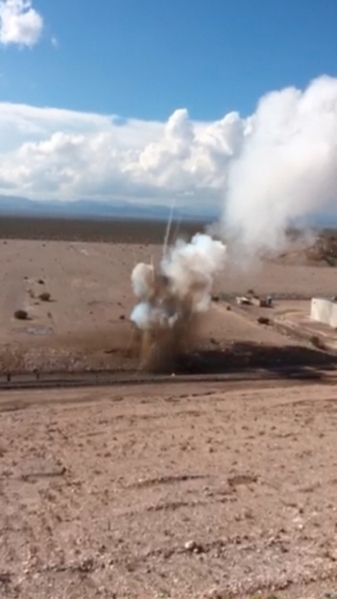 The investigation into the industrial fire at the shuttered waste disposal site near Beatty said that the incident was caused by a chemical reaction between rainwater and sodium metal in the trench area where low-radioactive waste had been buried.

The findings from the investigation into the fire at the state-owned radioactive waste disposal site located at US Ecology on U.S. Highway 95 approximately 12 miles south from Beatty were announced by the state of Nevada and Department of Public Safety’s State Fire Marshal Division in a press release on Dec. 30.

The Oct. 18 explosions at Trench 14 preceded a fire that shut down a 140-mile stretch of U.S. 95 for almost 24 hours. Officials also closed schools in Beatty and Tonopah the following day.

The 80-acre industrial site in Nye County consists of a 40-acre low-level radiological waste storage site and a 40-acre active chemical processing facility. The site was operated by US Ecology and its predecessor, Nuclear Engineering Co. from 1962 through 1992.

The authority was transferred to the state of Nevada in 1997 after the low-level radioactive waste portion of the site was closed. US Ecology continues to operate a 40-acre landfill for hazardous waste, including chemical waste on the land that the company leases from the state.

During the investigation, officials collected video evidence, witness statements and evidence found at the scene.

As part of the investigation, the state agency team also collected samples of debris displaced from the incident pit, debris from within the pit, and of the white surface coating left downwind of the incident site. The results of the analysis identified all samples to be “significantly” high in sodium metal, the report said.

Waste materials were buried in a variety of containers and packaging, including steel drums, cardboard boxes and wood crates. Over multiple decades after burial, the packaging materials have deteriorated and collapsed, causing void spaces and the resulting settlement of the fill and cover material in several areas at the site, according to the report.

Vance Payne, Nye County Emergency Management director, declined to comment on the contents of the report.

“Nye County continues to be included in the investigation and looks forward to the state of Nevada reporting to the towns of Amargosa Valley and Beatty in a town hall setting,” he said.

The evidence collected by investigators also showed that portions of the cover were compromised due to settling and collapse of underlying waste containers resulting in subsidence and cracking of the cover and allowing the migration of rainwater into these areas.

The heavy precipitation prior to and on Oct.18 saturated the earthen cover over the buried waste, the report said. Rainwater seeping through the compromised earth cover reached the metallic sodium, causing an exothermic reaction between the water and the metallic sodium.

Karen Beckley, radiation control manager in the Gov. Brian Sandoval administration said the corrosion and breaking down of the packages is “normal” over time. In the meantime, the state is receiving proposals from experts to map, study and permanently repair the site.

“The site is considered safe as the subsidence and cracks have been repaired to prevent moisture from entering the trenches,” Beckley said in an email. “The site is currently being monitored with an on-site weather station during rain and snow storms to track moisture that may affect the site. There is no plan to move any of the materials from the site at this time.

As of Nov. 17, 2015, several interim repairs were completed, including over-packing drums, adding fill dirt, replacing liner covers and adding final material over the top to prevent moisture entry. The cracks on other trenches were dragged, filled and leveled, according to the report.

A long-term repair is being analyzed by several agencies and organizations, Beckley said.

“The interim repairs are adequate for the purpose of maintaining the current state of the site. It is too early to give a time or cost estimate on a permanent repair,” she said. “We hope to have cost estimates and plans to compare within 60-90 days.”

The site is being monitored daily by USEN workers, Beckley said. USEN site manager also walks the site monthly and after snow and rainfalls to monitor visual damage. The Radiation Control Program have been visiting site bi-weekly to monthly since the incident for repairs and radiological and visual inspections.

The RCP will continue to perform frequent visits until permanent repairs are complete. Officials said the increased oversight is supposed to reduce the possibility of another incident in the event of rain and allow cap cracks and subsidence to be identified and fixed.