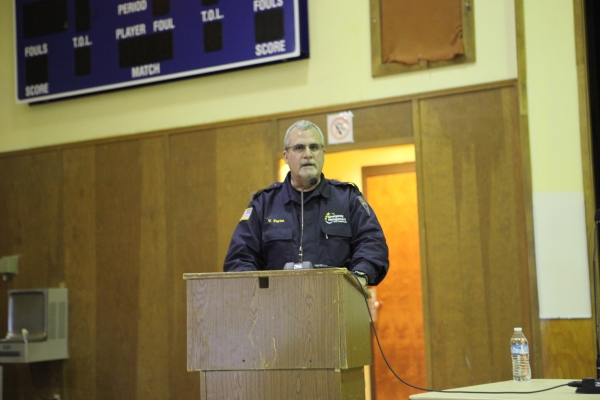 AMARGOSA VALLEY – A full-scale remediation of the US Ecology industrial site could cost millions of dollars, state officials said during a meeting on Monday.

A group of state officials who presented the findings from the report into the October industrial fire at the US Ecology site said the state is working with several private engineering companies that are expected to provide costs of permanent repairs for the site.

The bidding process for the site repairs hasn’t started yet as officials expect the final estimate in the next 30 days, Jon Bakkedahl, radiation control supervisor for the State of Nevada, said at the Amargosa Valley meeting. US Ecology site located on U.S. Highway 95 approximately 19 miles north of Amargosa Valley

“We’ve got one preliminary estimate back and it’s a multi-million dollar project and it’s going to be a multi-year project,” he said. “This isn’t something that’s going to happen overnight and that’s why we continue to arrive at the facility locally here, do surveys of the site, do visual inspections of the site.”

The State of Nevada would have to pay for the money for the project, however officials said it will take at least a few months to determine where the funds will come from.

Separately, Bakkedahl said the U.S. Geological Survey had offered to invest about $175,000 in doing different types of ground-penetrating radar imaging of the facility.

“So they are going to do multisteps, multilayers of analysis of the ground both above and below, image it and see what’s changing out there, looking for void spaces down below that may need some sort of compaction.”

Low-level radioactive laboratory junk had been buried at the site in a variety of containers and packaging, including cardboard boxes, steel drums and wooden crates that deteriorated and collapsed over time, officials said.

In a press release on Dec. 30, officials said that the industrial fire at the state-owned radioactive waste disposal site was caused by a chemical reaction between rainwater and sodium metal in the trench area where low-level radioactive waste had been buried.

Bakkedahl said multiple samples of the groundwater and air following the explosion didn’t show any radiation.

“Your groundwater, everything around you is safe,” he told the audience in Amargosa Valley.

Bakkedahl the cost of oversight is “well beyond what was recommended for the site,” and added he said he “felt comfortable” being on the site.

Since the incident, Bakkedahl said two more areas that had showed some cracking and subsidence had been repaired.

No consideration was given to pulling the buried materials out and repackaging them according to current regulations per advice from other states that have similar facilities as well as several federal agencies.

Officials said that the main concern with the other trenches is the weather pattern with the large amount of moisture that Amargosa Valley and the rest of the state has received because of the El Nino pattern.

“So, we are constantly being present more to observe any physical changes to the site and during all those visits, there are radiation equipment used for surveys as well,” Bakkedahl said. “But the biggest risk at this point is water possibly penetrating the site in the interim of it being permanently repaired.”

After the meeting in Amargosa, the Payne, Bakkedahl and others held a similar meeting in Beatty later that day. (See story from that meeting on A2)