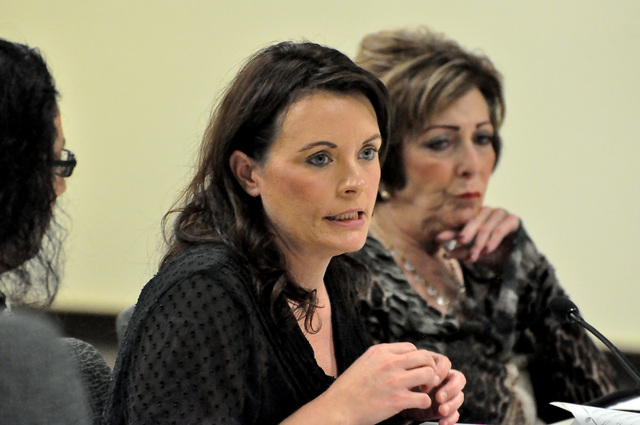 Resident Jacqueline Lawson was denied a conditional use permit for a child care facility in a single-family home in Pahrump. Horace Langford Jr./Pahrump Valley Times

The Nye County Regional Planning Commission on Dec. 14 declined a request for a conditional use permit for a child care facility in a residential area of Pahrump.

The applicant, Jacqueline Lawson, proposed to operate a child care facility in a single-family residence in Pahrump. However, the commission denied the request with a 4-to-3 vote after its members and some of the neighbors brought up concerns about the available space inside the facility, and its impact on the neighborhood.

Commissioner Joel Oscarson said the facility will change the essential character of the area. He also said that the proposed use is “inappropriate and not compatible with the character of the property and the general vicinity.”

“The conditional use will involve uses, activities and conditions of operation that would be detrimental to the persons, properties and the general welfare by reason of excessive production of traffic, noise,” he said.

The facility would provide services for 20-to-40 children in a single-family residence from 6 a.m. to 6:30 p.m., Lawson said. The state indoor space requirement is 35 square feet per child, she told commissioners.

“The home is actually, I believe 1,600 square feet, that would give a minimum amount of allowable (space) for about 44 children,” she said.

“Not that I doubt your ability to take care of those, but I have to project the concerns that 40 kids in 1,600 square feet is awfully small (space),” Oscarson said.

Among other concerns raised at the meeting were available parking, wear and tear on the street.

Commissioner Bob Adams said that heavy travel on the street to the proposed child care could impact the neighborhood.

“That is a concern that with that many children you are operating a commercial business, a commercial establishment within a residential neighborhood,” Adams said.

Along with the application, officials received seven letters of support. The town of Pahrump emergency services and the school district didn’t provide a comment for review.

Maria Guerra, one of the neighbors, said many of the working families who live in the neighborhood have to drive a distance to get their children to a daycare.

“It is a huge problem, and it hinders the success of many families, making it or not making it,” she said about the shortage of day care services in Pahrump. “Many families are stuck in the system, needing assistance because they can’t get quality day care,” she said.

According to the Department of Public and Behavioral Health, as of September of this year, the latest data available, Nye County had six licensed child care facilities: one in Round Mountain, four in Pahrump and one in Amargosa Valley.

Jennifer Leonard, an employee at the Nevada Department of Welfare in Pahrump said the issue of the lack of child care services is common among her clients.

“I probably see 25 to 30 people a day. … A lot of people have to get back in the system because they don’t have any child care. They come begging for us for any kind of help. We can’t do anything about it,” she said.

“We don’t need any more traffic other than the people that live on that street,” he said.

Another neighbor, Chris Marshall, said he was also concerned about the shortage of child care services, but noted that the proposed residence “is definitely not the spot for it.”

“It’s a manufactured home, very small, there’s no parking,” he said. “It’s a quiet street, this street would be crazy busy.”

“By doing this, it’s not my intention to make them angry or cause any issues. I do honestly want to do this for the children and the community,” she said.