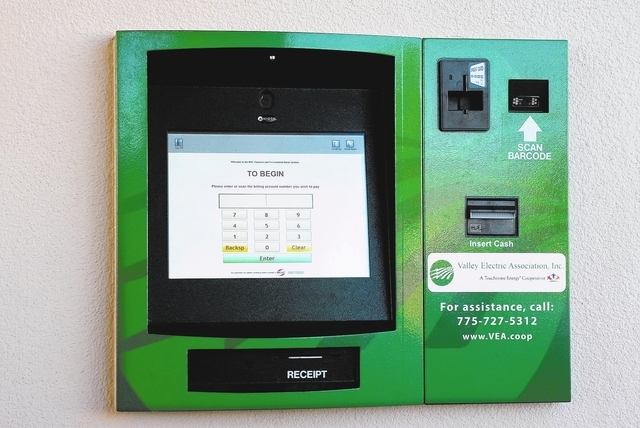 Valley Electric Association members will no longer be able to make payments at the drive-thru window to a live person as of Dec. 6.

VEA is replacing the drive-thru window with the EasyPay Kiosk, which made its debut Oct. 14. As of last Wednesday, 637 payments were made at the kiosk. It’s located next to the drive-up service window at VEA offices, 800 E. Highway 372.

The kiosk can be accessed at any time.

Utilities Inc. of Central Nevada drew heat for closing its customer service window Feb. 15, 2010 after UICN consolidated 10 customer care centers nationwide into three locations, taking payments by phone, one of which was in Pahrump. UICN customers can make payments in person at Community Dish, 311 S. Frontage Rd., for a small fee. They can also pay by phone, over the Internet or by auto draft from bank accounts. UICN estimated the operation of a drive-up window would cost one full-time and require a half-time employee as a backup during peak hours at an annual cost of $77,482, including banking and equipment costs.

But VEA members can still get out of their car and pay their monthly bill to an employee inside the office.

VEA members have a number of options for accessing account information at the outdoor kiosk. They can scan the VEA new EasyPay card, which is free and available to all members. People can also access their accounts by entering their account information on the keyboard or scanning the bar code on their bill. Members can make payments by credit card, debit card, electronic checks or cash.

VEA said the opening of the kiosk and closure of the drive-thru window will allow members multiple options for managing their accounts, whether they prefer quick and simple access at the kiosk, assistance by customer service representatives over the phone, or face-to-face at the VEA office.

“By replacing the drive-up window with the new EasyPay Kiosk VEA will be able to move staff members from the window to other customer service positions, providing additional support to members who call or visit our office,” said Dan Tillman, VEA executive vice-president of administration and finance. “VEA is passionate about providing members with a variety of convenient tools for managing their accounts.”

In addition, VEA members can access account information via SmartHub, a free application accessible via computer, smart phone or tablet that allows people to pay their bills and view detailed information about their energy usage.

A security guard was assisting a couple of VEA customers paying their bill at the kiosk Friday, while doors were closed during the four-day Thanksgiving weekend. One customer whipped out his EasyPay card and used the kiosk, but another driver backed up and drove away.

“I’m going to save my money for another day. You can try to figure it out,” the driver told a Pahrump Valley Times reporter.