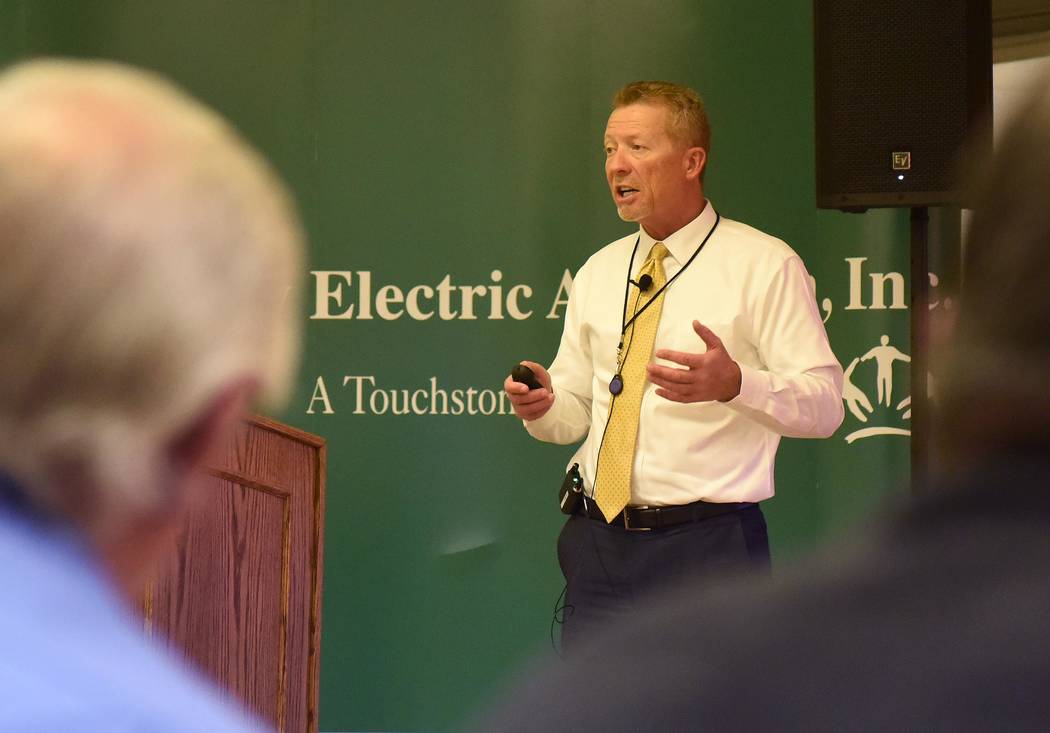 Valley Electric Association CEO Tom Husted explains the time frame of when Beatty will get its high-speed internet at the District 3 Annual Meeting at the Beatty Community Center on March 8. Richard Stephens / Pahrump Valley Times

“Beatty will be the first all-fiber-optic community in Nevada.” So said Valley Electric Association CEO Tom Husted at the District 3 annual meeting at the Beatty Community Center, March 8.

However, Beatty residents will still have to wait a while for fiber-optic Internet service.

“I ask for your patience,” said Husted, explaining that installation of the service requires replacing existing power poles with higher ones designed to handle the additional cable. He estimated it will take four to seven months for the work to be completed.

Valley Communications is already in operation in Pahrump via a system of Wi-Fi towers, and Amargosa Valley is set to begin hook-ups this month.

On keeping the cost low, officials said it was amazing how the staff continually found creative ways to “pull the rabbit out of the hat,” and Husted pointed out that, despite increases in the cost of power, rates are still the same as in 2010.

In speaking of the company’s contract with Creech Air Force Base, officials said that the Air Force had complimented VEA on their operation and said that VEA replaced old, deteriorated infrastructure, and that its employees had been able to track down and fix a periodic outage problem that had puzzled the Air Force for years.

Husted said that the company has been able to grow, even during the worst recession in its history. Early in the recession, they reduced staff as part of a cost-cutting strategy. They have been adding staff this year, partly because of increases in the size and scope of operations.

The company plans to reinvest profits from the sale of transmission lines in the company, said Husted.

An email has been circulating casting doubt on that sale, saying that it was the result of a decision made in an illegal meeting. Husted refuted that claim, saying it was totally inaccurate, and that the company had been careful in following legal counsel.

Husted said there are also always “interveners,” which he says are lawyers who make a living by raising objections and then taking a “black box” settlement.

One thing that is delaying the sale, however, is the lack of a quorum on the Federal Energy Regulatory Commission, which has to sign off on it. He said that body was down to three members out of five before the election, and another member resigned when President Trump was elected. Until at least one more member is appointed and confirmed, nothing can be done.

Another email in circulation cites huge figures from an IRS Form 990, representing them as the salaries of officers. Husted says that whoever is circulating it doesn’t understand how to interpret the forms, and that the numbers cited actually are projected retirement fund balances.

The same email is critical of the expense of an office the company leases in Henderson. Husted says it is important to have a place where the company can meet with legislators and with people from other companies with whom they do business. He says the expense is insignificant compared to the company’s total budget.

Regarding the emails, Husted said, “I don’t know what the motivation was behind the rhetoric, but it absolutely was not accurate. If you ever receive an email about the company or have a question about the company, call me. There is not boogey man in the company. There are no secrets.”