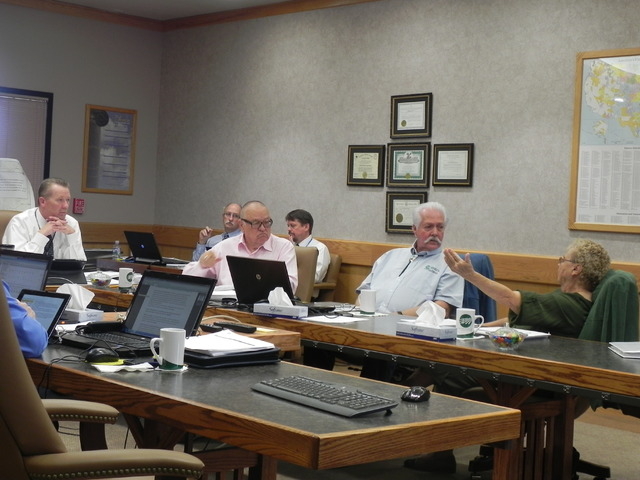 The Valley Electric Association Board of Directors Friday voted to return $1.5 million in patronage capital to members this year.

Chief Executive Officer Tom Husted said it’s based on the cooperative’s performance in 2014. Under the bylaws amounts received in operation in excess of costs not used to offset any losses incurred during the current or prior fiscal year shall be allocated to the members.

Fifty percent has to go to the first-in members, the oldest capital contributed by members that weren’t retired. The remainder goes to the newest members, under a bylaw change a few years ago. The oldest members will receive two checks then, for the earliest year they bought service and the last couple of years.

Board chairman John Maurer said long-time members will receive payments on both ends. But board member Dave Lawson raised the suggestion of altering the formula to reward just the oldest members.

“I just think it seems to me the members that have been in the longest should benefit,” Lawson said.

“The reason we wanted to retire patronage capital to the newer members was we wanted them to get the idea that this was a co-op where you do participate in the, I’m not going say profits, but margins of the cooperative. So if you give them 50 percent you’re sending out a loud message to the new people that being a member of Valley Electric pays off,” VEA board member David Lowe said.

Board member Peter Gazsy said he favored keeping the 50/50 distribution plan and made the motion that was approved unanimously.

As of Oct. 31, VEA forecasted a year-end operating margin of $4.6 million, what cooperatives refer to as profits.

VEA board member Shiela Rau asked if the November and December figures might alter that positive outlook.

“The next months we typically have budgeted as negative margin months, slightly. But right now with the way the weather’s been I think we’ll end up in a very positive position at the end of the year,” he said.

In a projection going forward to Jan. 1, he said, “We’re a little over $5 million in our margins for the year, we had budgeted about $4.4 million so we’re improved by $690,000. Projected year-end currently we still project around $4.6 million.”

VEA reported $48.1 million in operating revenue this year, down from $48.8 million last year. But expenses were also down. Tillman said the cost of power, their largest expense, was $18.5 million, a decrease of $7.3 million from last year. Total operating and maintenance cost dropped from $42.5 million to $35.8 million, they budgeted $37.9 million. The total cost of service was $47.7 million last year, he said. This year it dropped to $43.6 million, an 8.5 percent decrease, and less than the $46 million budgeted.