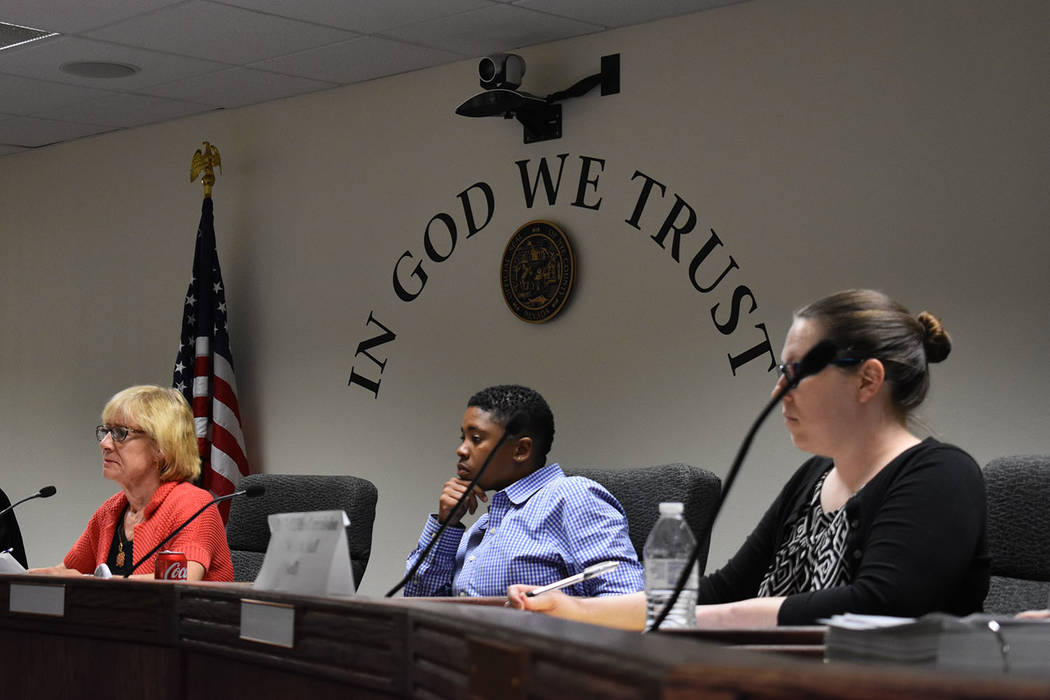 Daria Sokolova/Pahrump Valley Times The Public Utilities Commission of Nevada held a consumer session in Pahrump on June 8. Commissioners heard testimonies from many customers of the Great Basin Water Company who spoke against the proposed water and sewer rate increase.

Pahrump residents denounced the rate hike proposed by the Great Basin Water Company at the hearing, as many said that they can’t afford increased rates for sewer and water.

On Jan. 17, Great Basin Water Company, formerly known as Utilities Inc. of Central Nevada, filed an application with the Public Utilities Commission of Nevada to adjust its annual revenue requirement for water and sewer rates for all classes of customers in the Pahrump division.

In its original filing, the company requested a 6.81 percent increase for sewer and 11.86 percent for water, but the company representatives said that the company made a certification filing on June 2 to decrease the requested rates.

“We believe we put together a good case, and I think there will be a rate increase, but ultimately, that is up to the Public Utilities Commission of Nevada,” said Wendy Barnett, president of the Great Basin Water Company.

The Bureau of Consumer Protection and the regulatory operations staff of the PUC are analyzing the request and will make recommendations to the commission and allow the Great Basin Water Company to reply to these recommendations.

The commission has yet to go through more investigations and hearings and could either grant or deny the request.

Barnett said the company had done about $5 million in capital improvements in Pahrump that included several emergency projects since the 2015 rate case when the company was granted a water rate increase and sewer rate decrease by the PUC.

Some of the projects that the company is seeking to recoup money for include rehabilitating well 8, implementing GIS mapping and looping the water main for redundancy for Desert View Hospital.

“These projects are very focused on water, we don’t even have the sewer project listed in this current integrated resource plan,” Barnett said. “These are things that the company has heard from the community, through the advisory committee on the groundwater management plan, through commissioners, through the Nye County Water District, through discussion with the state engineer on things that the utility can do to support basin 162.”

A few dozen customers of the Great Basin Water Company testified June 8 against the proposed rate hike, questioning why the company seeks to increase the rates.

Several commenters said that those who live in Comstock Park, a Pahrump community with many retirees and disabled veterans, said residents of the park will not be able to afford the proposed increase.

“We have a critical situation, we are talking about increasing water rates to a community like that, and they really can’t afford that,” Curtis said.

“You have to get a balance here because you are risking the most fragile, most at-risk sector of retired people, fixed income, disabled veterans,” Lewis said.

The Great Basin Water Company is required under statute to file a general rate case every three years, officials said.

In a rate case, officials said, they put together all of the costs associated with the company, all of the expenses on an annual basis associated with operating the systems, both water and sewer, to determine what level of revenue the company needs to cover all of those costs. That amount is termed revenue requirement by the regulators and utility companies.

During the 2015 general rate case, the company went into decoupling, a methodology under which it would be going through the process to determine whether there was overcollection or undercollection of revenue, and will go before the commission to determine what the rates and credit would be.

The process is supposed to make sure the company adequately covers the costs of the water service provided to its customers and guarantee that it doesn’t overcharge its customers.