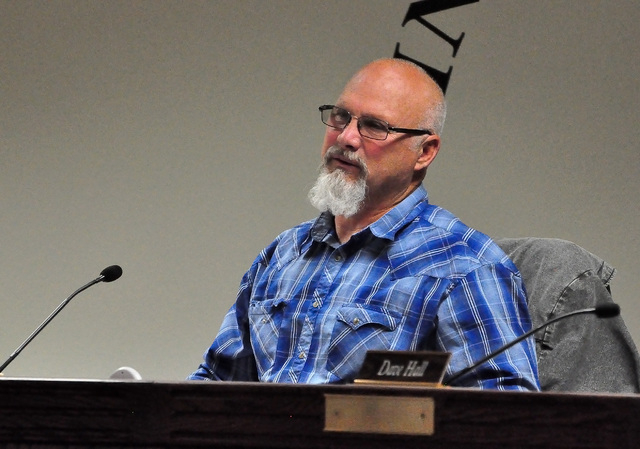 Editor’s Note: This is the part a series of profiles looking at Nye County Commission candidates in the June 14 primary election. The Pahrump Valley Times will release its Election Section on May 27, the day before early voting.

Nye County Water District Governing Board Chairman Greg Dann wants to make sure Pahrump well owners have their say in a conversation about water rights, if he gets into the seat in Nye County’s District III.

“I want to be effective. I’ve got two and a half years of my life into this (water issue). I’m not happy where it’s at. I feel I can be more effective at the next level,” he said.

Dann chairs the Nye County Water District Governing Board and was a member of the Basin 162 Groundwater Management Plan Advisory Committee before it was dissolved.

The Pahrump Valley has 11,000 domestic wells, the largest concentration in Nevada. Most of those wells are junior in priority to water rights in the valley.

“I’m looking for resolution to this (issue). I don’t want this water thing (to be) continually on the agenda. I want us to come to some kind of resolution, some policy,” Dann said.

He said he will resign from the Nye County Water District Governing Board, if elected as a commissioner.

The district contains a large amount of the area’s retail commerce, running along Highway 160 from Bell Vista Avenue in the north to Winery Road. It also includes the north side of Highway 372 west to Barney Street.

Several candidates for the seat said they want to bring more business to Pahrump. Dann said he wants focus on water first and then drive down crime and work on a possible code compliance.

“My primary consideration right now is water, so to me growth is secondary to the issue of water,” he said.

“Once the water is controlled and we have some agreement or policy set, I think the business will fall into place where it falls,” he said.

Greg has been a resident of Pahrump for over 30 years. He was previously a member of the Local 525 Plumbers and Pipefitters Union. He worked in the construction industry and as a pipefitter at the Nevada Test Site, that was later renamed the Nevada National Security Site. During those years, he said, he had developed problem-solving skills.

On June 14, Dann will compete in the Nye County District III primary against incumbent commissioner Donna Cox, businessman Leo Blundo and Pahrump residents Antheny “AJ” Dodd and Louie DeCanio. The candidate receiving the most votes in the June 14 primary will be placed on the General Election ballot unopposed. No Democrats or small-party candidates filed.