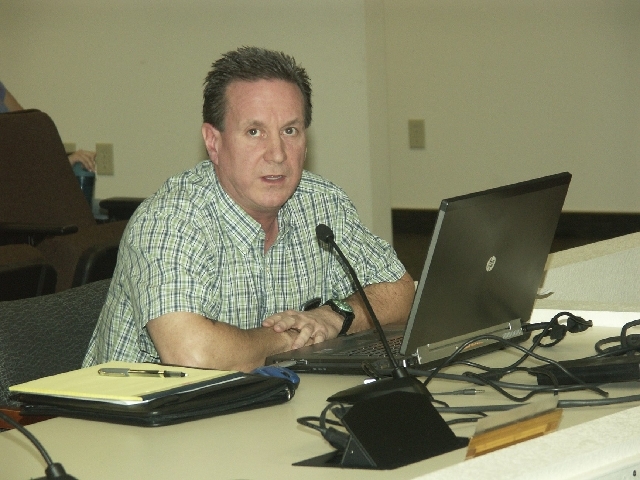 The Nye County Water District took a major step forward this week in addressing the issue of nitrates contained in commercial and residential wells in the region.

Nitrates are used in fertilizers, which is an essential source of nitrogen for plants.

Nye County Water District General Manager Darrell Lacy said past testing revealed measurable levels of nitrates found in groundwater in and around the Pahrump area. The task now is locating the primary source for the potential contamination.

“When nitrogen fertilizers are used to enrich soils, nitrates may be carried by rain, irrigation and other surface waters through the soil into groundwater. We are not quite sure where those nitrates are coming from that are showing up in the water. It could be from several different sources. We know that one area near the dairy was high and that’s understandable. We are not sure about some of the other areas. We don’t yet know if there are some failed septic systems that are getting into the water,” he said.

Lacy said there is at least one probable cause of nitrates finding its way to the valley’s groundwater.

He pointed to the on-going natural cycle of life in the southwestern United States.

“It tends to be more common in the desert areas. We think it has something to do with old lake beds where different plant and animal life along the shorelines got into the soils and was covered up thousands of years ago that may be causing that. There’s also the potential that some of the farming areas where the farmers were adding ammonia and other nitrate type fertilizers to their water when they were irrigating,” he said.

The water district is working with the United States Geological Survey (USGS) to help fund an upcoming water sampling project to understand more about how to remedy the problem.

USGS representative Michael Moran said the USGS is proposing a multi-phase nitrate study in the Pahrump Valley, as a follow-up to the pilot study previously conducted.

The latest study is intended to be funded jointly by the Nye County Water District and Nye County, with each entity contributing $30,000.

“Domestic wells to be sampled will be selected in order to achieve a random distribution throughout the study area. If the flow direction of groundwater can be estimated with reasonable certainty, some domestic wells will be selected that occur in various positions along groundwater flow paths that will help to identify potential sources, and understand the transport mechanisms and fate of nitrate contamination,” he said.

Moran also said that the samples collected to be analyzed for nitrates will be collected following USGS field sampling protocols and quality assured according the Nevada Water Science Center Water Quality Plan.

“All samples will be analyzed at USGS laboratories in Lakewood, Colorado and Reston, Virginia. Data from those samples will be stored in the USGS National Water Information System database and will be available to the public or the cooperators upon request,” he told water district officials.

Nitrates, in very high levels, can have an adverse effect on the human body.

Lacy said that the young are most susceptible to high concentrations of nitrates.

He also cautioned that there’s no immediate health hazard with current levels.

“It’s called ‘Blue Baby Syndrome.’ The nitrates in the water impact how the body absorbs and transports oxygen. It’s not a huge problem with adults but it’s much more of an issue with children and infants. We have identified that there were some high levels of nitrates in the valley. The Nevada Department of Environmental Protection declared the Pahrump Valley as a high nitrogen area but a high nitrate issue won’t be a problem with taking a bath or shower because it’s only with the water that we consume,” he said.

Lacy also said that the USGS is asking the water district and the county to help shoulder the costs of the sampling study.