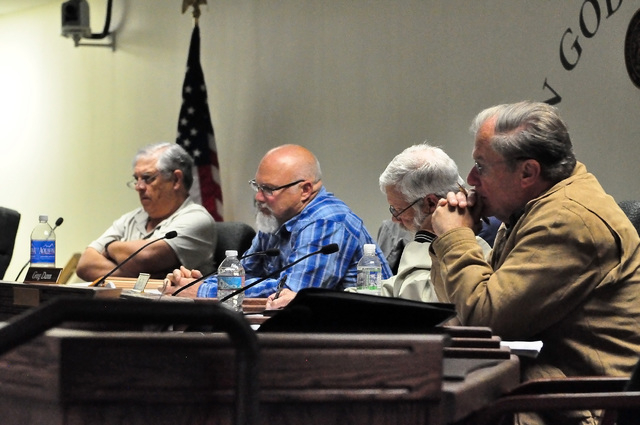 The Nye County Water District Governing Board will address overdedicated water rights after most of its members rejected the idea of looking into beneficial water use.

The board initially sought legal advice about proof of beneficial water use in Basin 162 from George Benesch, legal counsel for the Nye County Water District at the January 25 meeting.

In a letter addressed to Nye County Water District General Manager Darrell Lacy on Feb. 12, Benesch said that the board didn’t have the authority to demand to direct Nevada State Engineer Jason King to prove beneficial water use.

“It would be a futile act for the district to direct the state engineer to call for proof of beneficial use in the Pahrump Hydrographic Basin,” Benesch said in a letter.

Benesch said that state law provides for a groundwater management plan for the Pahrump Hydrographic Basin and such a plan has been drafted and is in the process of being approved at the local level.

“The ongoing proceeding of adopting such a plan would be the appropriate place to bring the proposed action that is the subject of this letter to the attention of the state engineer,” he said in a letter.

Most members of the board abandoned the idea after hearing the letter, but chair Greg Dann said he still wants to pursue the plan.

“The longer we put off rectifying this problem, it will come back, I guarantee you, to every single domestic (well) owner in this valley, no doubt in my mind,” he said.

Nevada water law follows the doctrine of prior appropriation, or “first in time, first in right,” which means that the first person to file on a water resource for beneficial use is typically considered first for a permanent right to the water. This, however, is subject to the state engineer’s determination of available unappropriated water, according to Southern Nevada Water Authority.

Per the board’s request, Oz Wichman, contractor for water board, will draft a letter for a clarification of overdedicated water rights.

“Overdedication is a large part of getting the overallocation amount in line with perennial yield,” Wichman said after the meeting.

Wichman said when a developer creates a subdivision, the state of Nevada requires them to dedicate water rights some 3-to-4 times greater than anticipated actual use. Only 25-to-30 percent of those water rights are pumped, he added.

“So the question is what happens to everything that is overdedicated,” Wichman said.

“We need to clarify that the state engineer will not allow these water rights to be moved in support of another project,” he added.