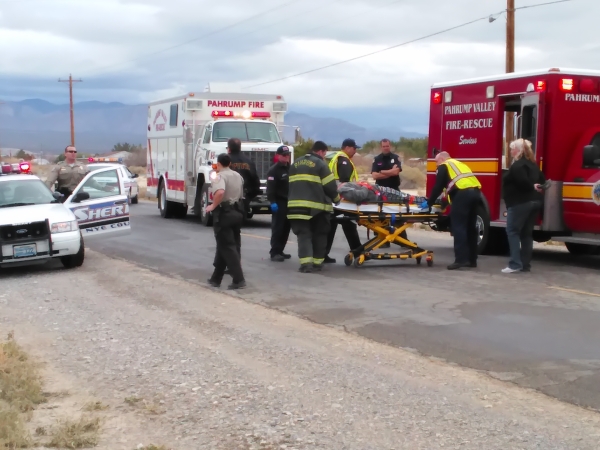 One person was transported to Desert View Hospital following a rollover crash just after 10:30 a.m. on Tuesday.

Pahrump Valley Fire and Rescue Services, along with the Nye County Sheriff’s deputies, responded to the scene along Mesquite Road at Pearl Street. The initial investigation revealed the driver was attempting to turn eastbound onto Mesquite from Pearl when he somehow lost control of the early model Datsun pickup truck, which exited the roadway and rolled at least once, coming to rest roughly 25 feet off the rain-slickened road.

It’s unknown if the male driver was wearing a seatbelt, or whether he will be cited.

On Thursday, emergency crews responded to a collision along Highway 160 just north of Basin Avenue.

NHP Sgt. Carlos Rivera said the preliminary investigation revealed the driver may have suffered a medical condition prior to impact.

Rivera also said after the initial impact, the driver of the blue pickup truck crossed several travel lanes before coming to rest in the desert east of Highway 160.

“He traveled across the cement barrier, crossed the sidewalk and a dirt embankment,” he said. “The driver then went across the frontage road and nearly struck a building facility on the eastside intersection at 160 and Basin. Everybody appears to be fine.”

Rivera also said the collision could have been much worse.

“We are very fortunate that we did not have pedestrians walking on the sidewalk or bicyclists along the travel lanes, because this could have been a very unfortunate incident. We do want to remind the motorists that they do need to pay attention to their surroundings, are aware of traffic both in front and behind them, distracted driving will take away your attention from the roadway, and always wear your seatbelt.”