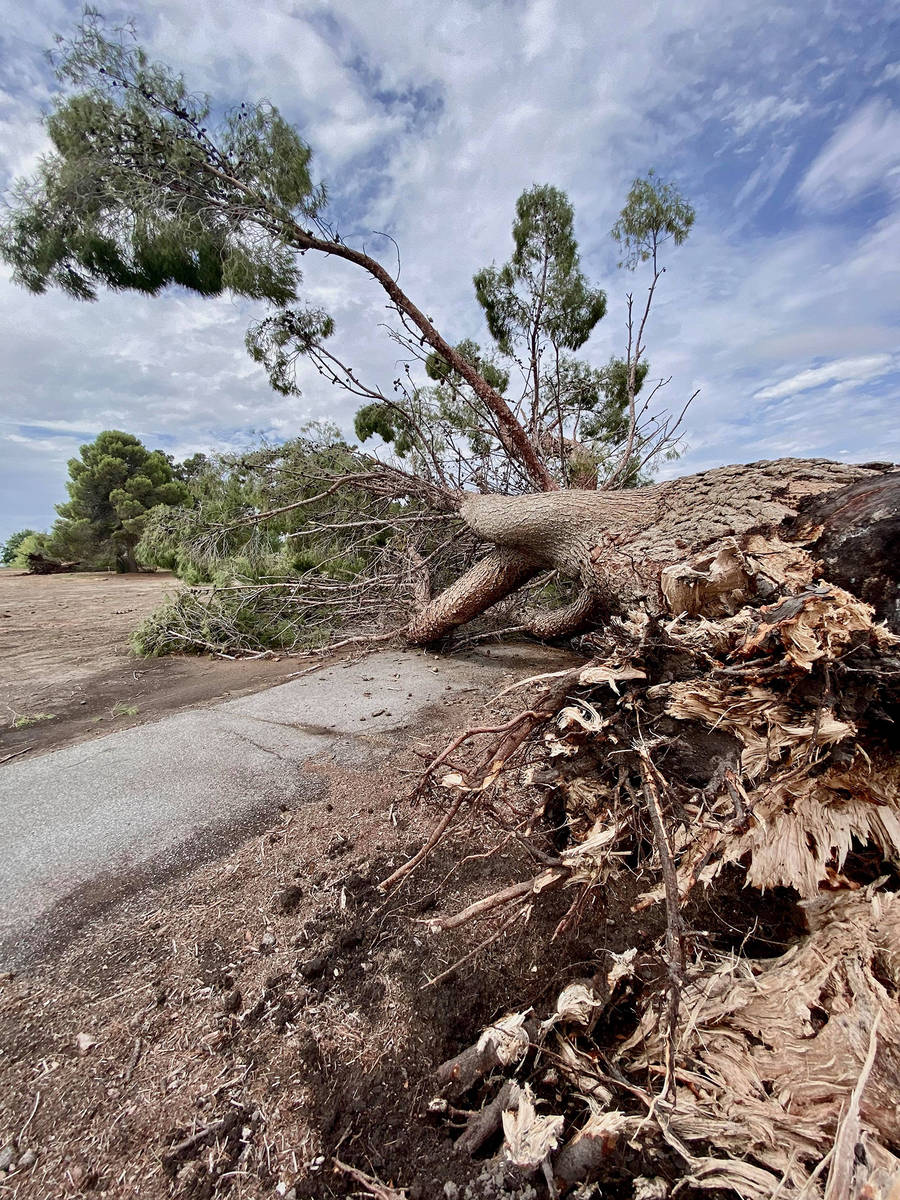 Special to the Pahrump Valley Times Taken by Annette Blodgett, this photo shows a downed tree at Discovery Park, which experienced extensive damage as a result of recent storms. 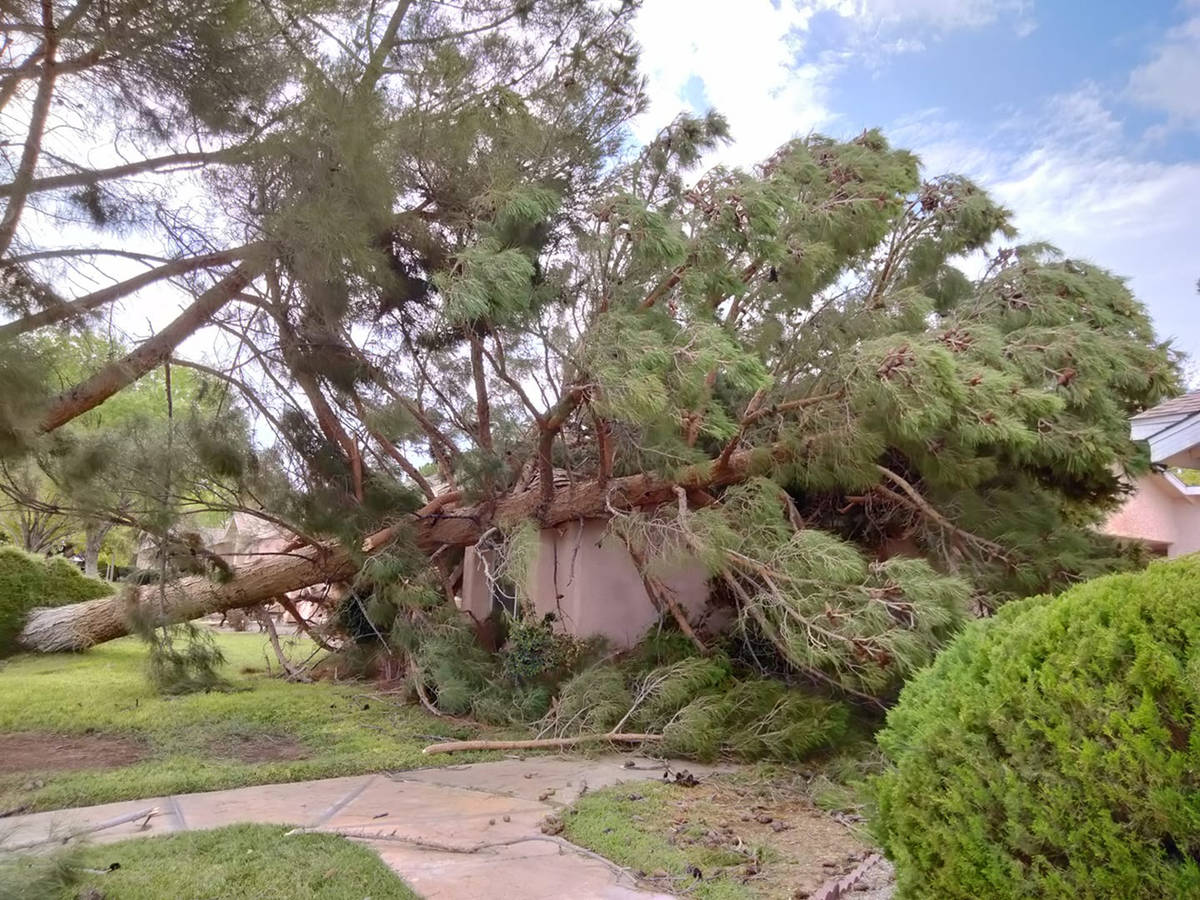 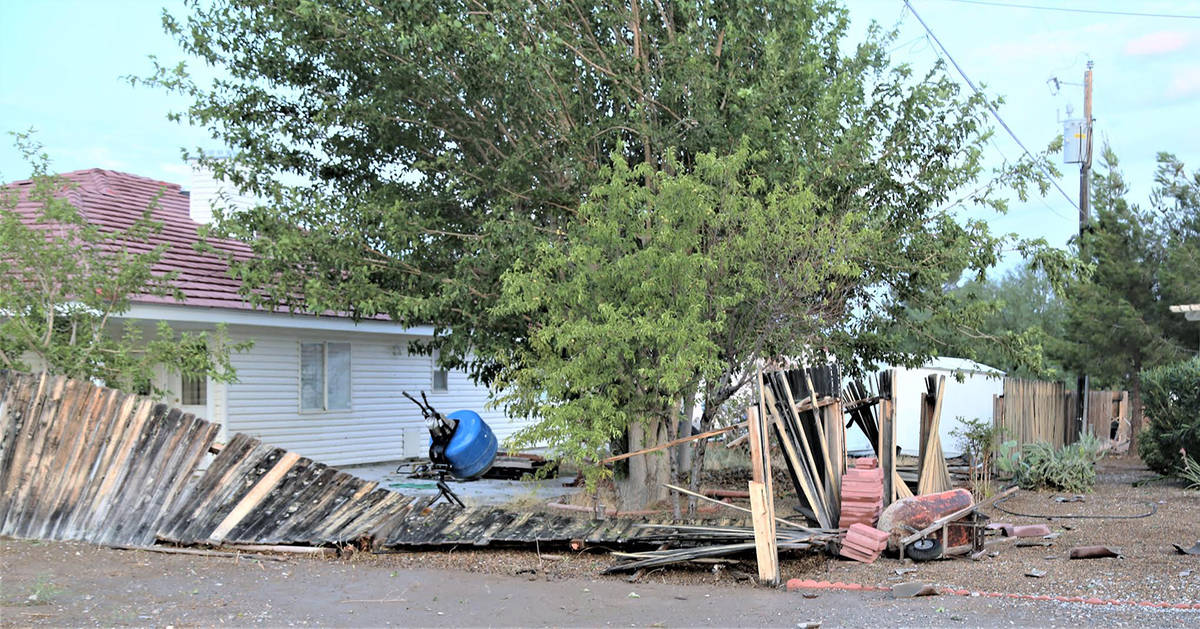 Special to the Pahrump Valley Times Reader Randy Gulley shared this photo of damage sustained by the fence at his home located on Dayton Street. 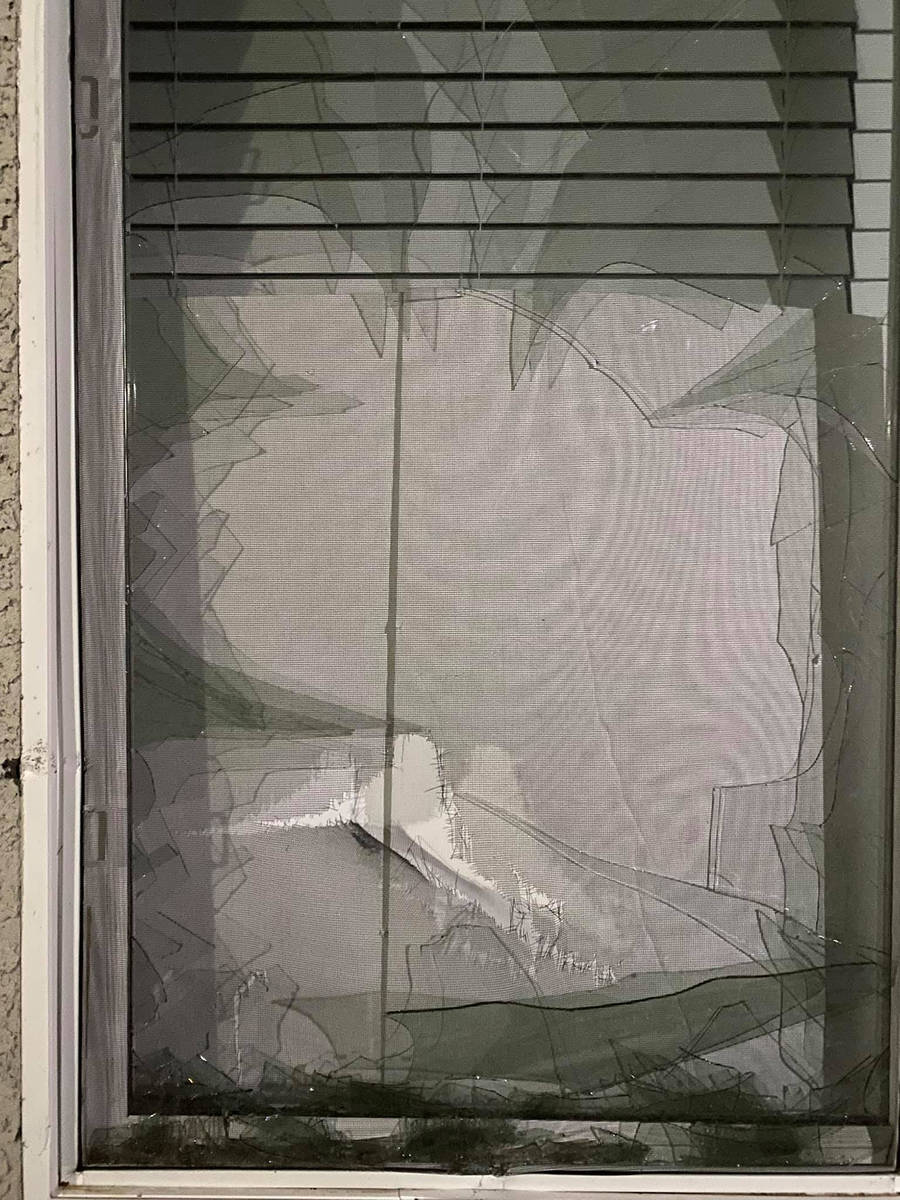 Special to the Pahrump Valley Times Ryan Muccio shot this photo of a broken window, the result of wind damage. 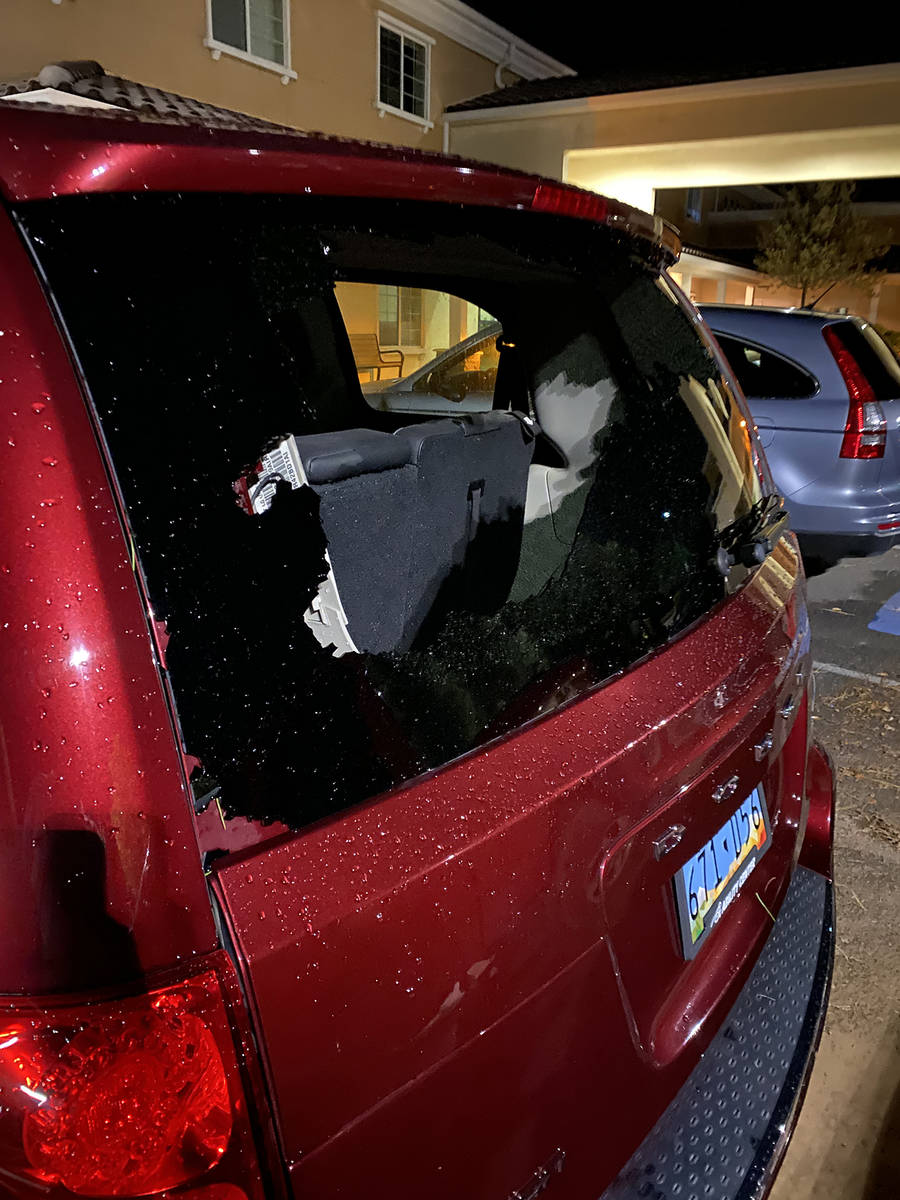 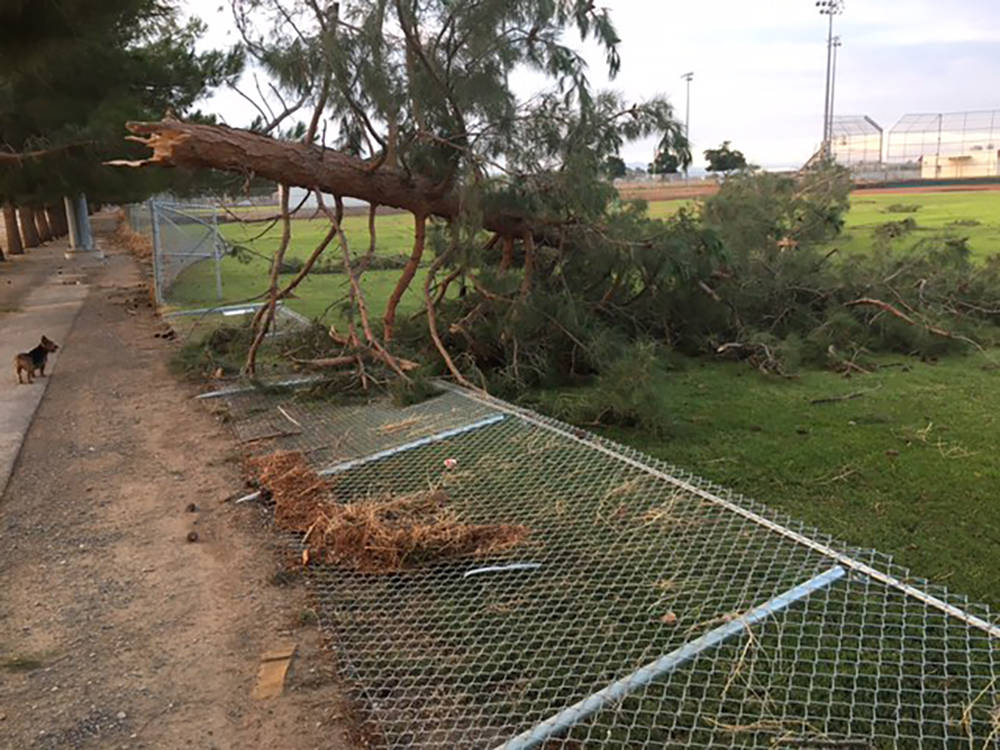 Special to the Pahrump Valley Times Resident Richard Bushart shot this photo of a downed tree laying on the fence at Ian Deutch Memorial Park. 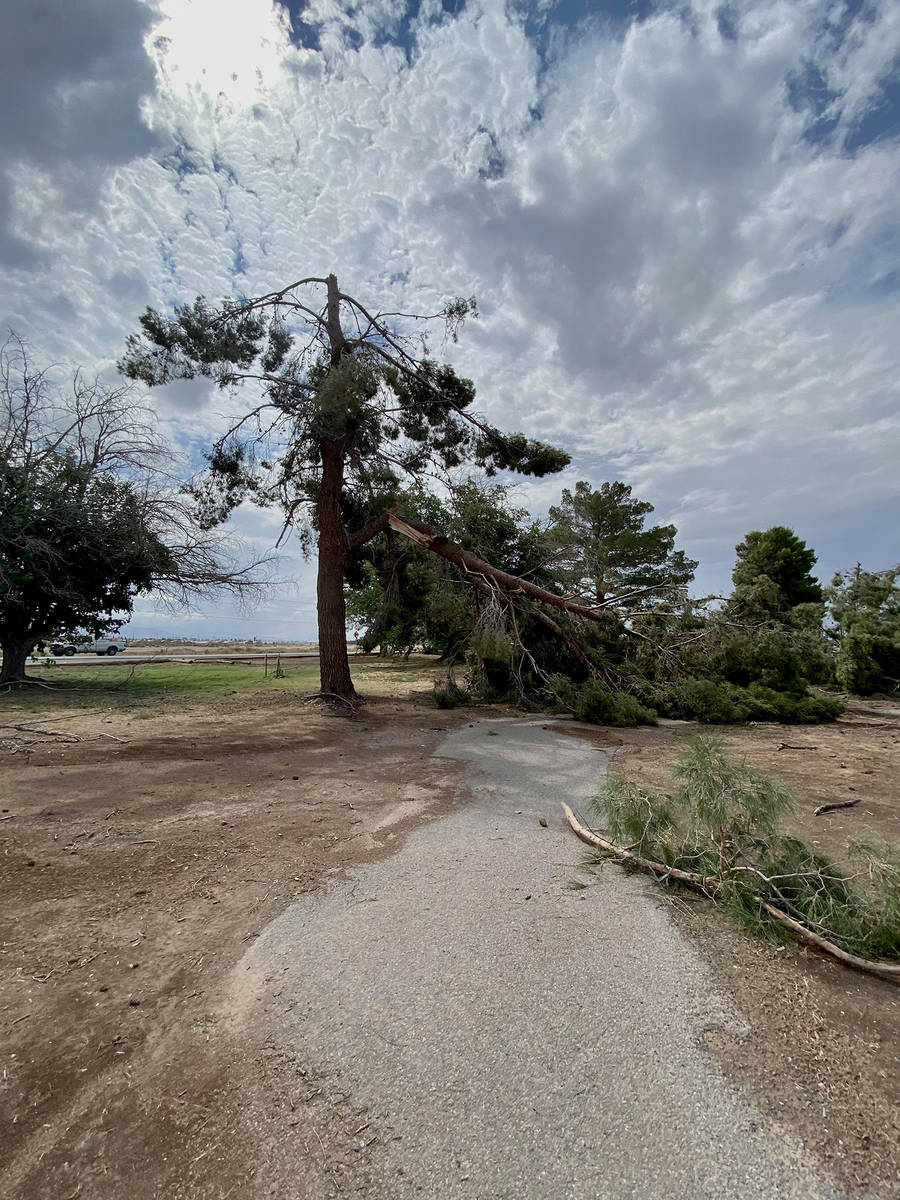 Special to the Pahrump Valley Times Annette Blodgett also took this picture of a damaged tree at Discovery Park. 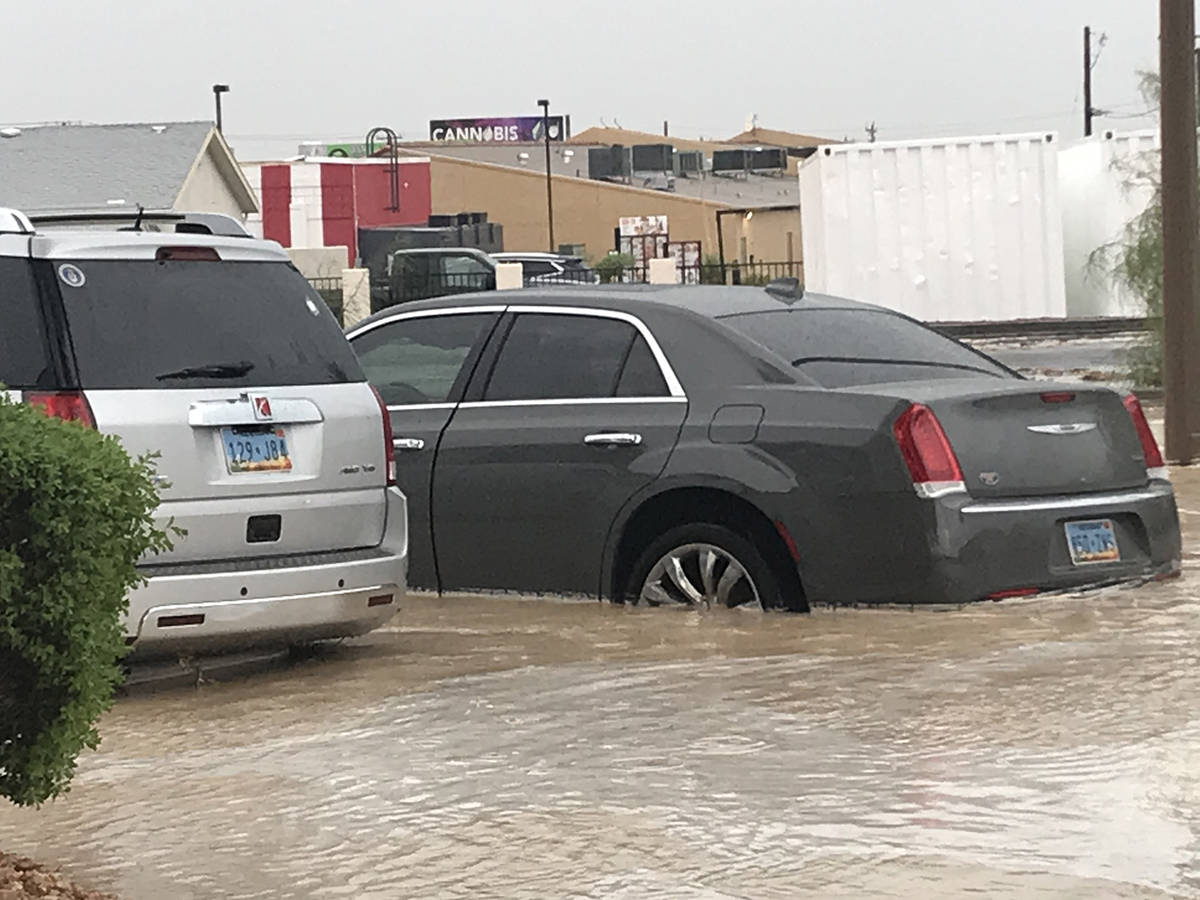 Special to the Pahrump Valley Times Monday's storm brought extensive flooding to the valley, with some areas quickly accumulating water that began to submerge vehicles up to their doors. 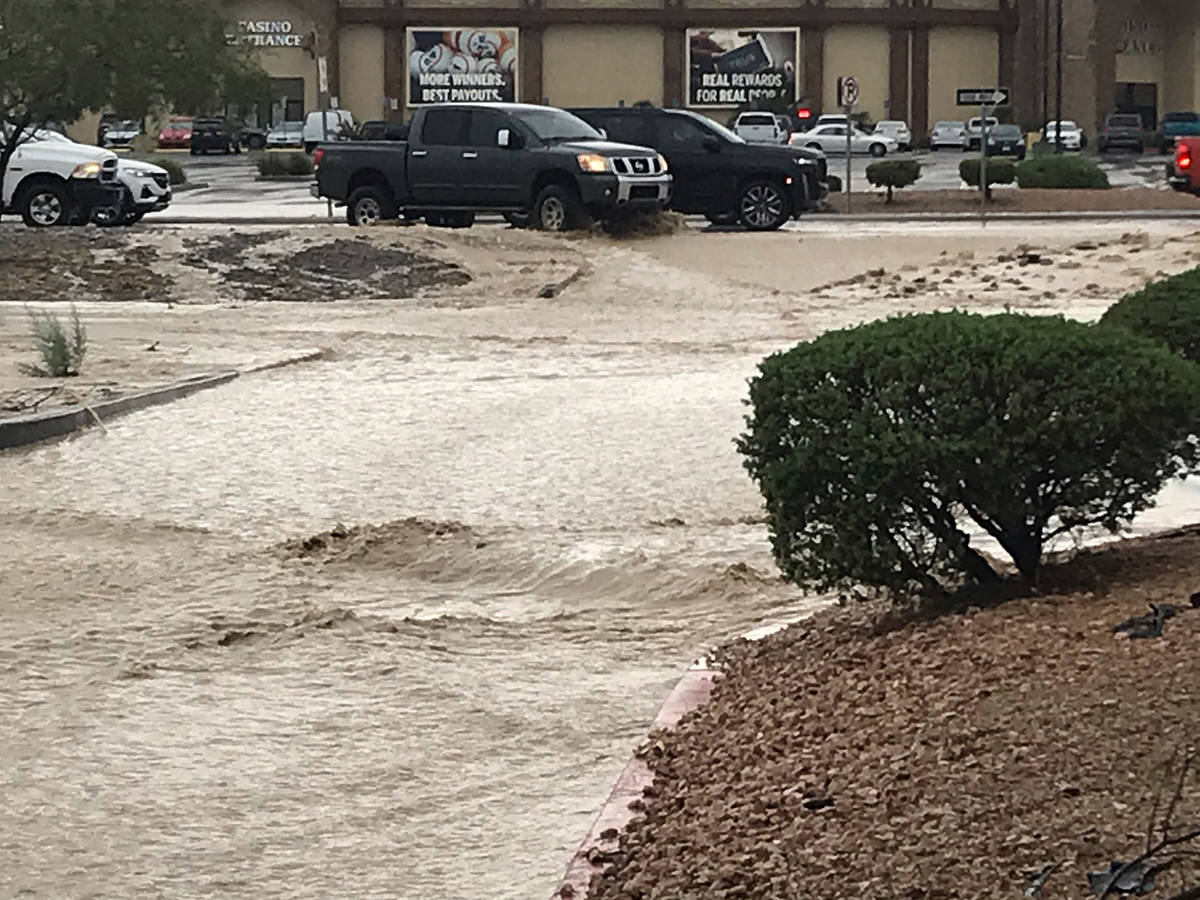 Special to the Pahrump Valley Times This photo shows flooding near the Bank of America parking lot in Pahrump. 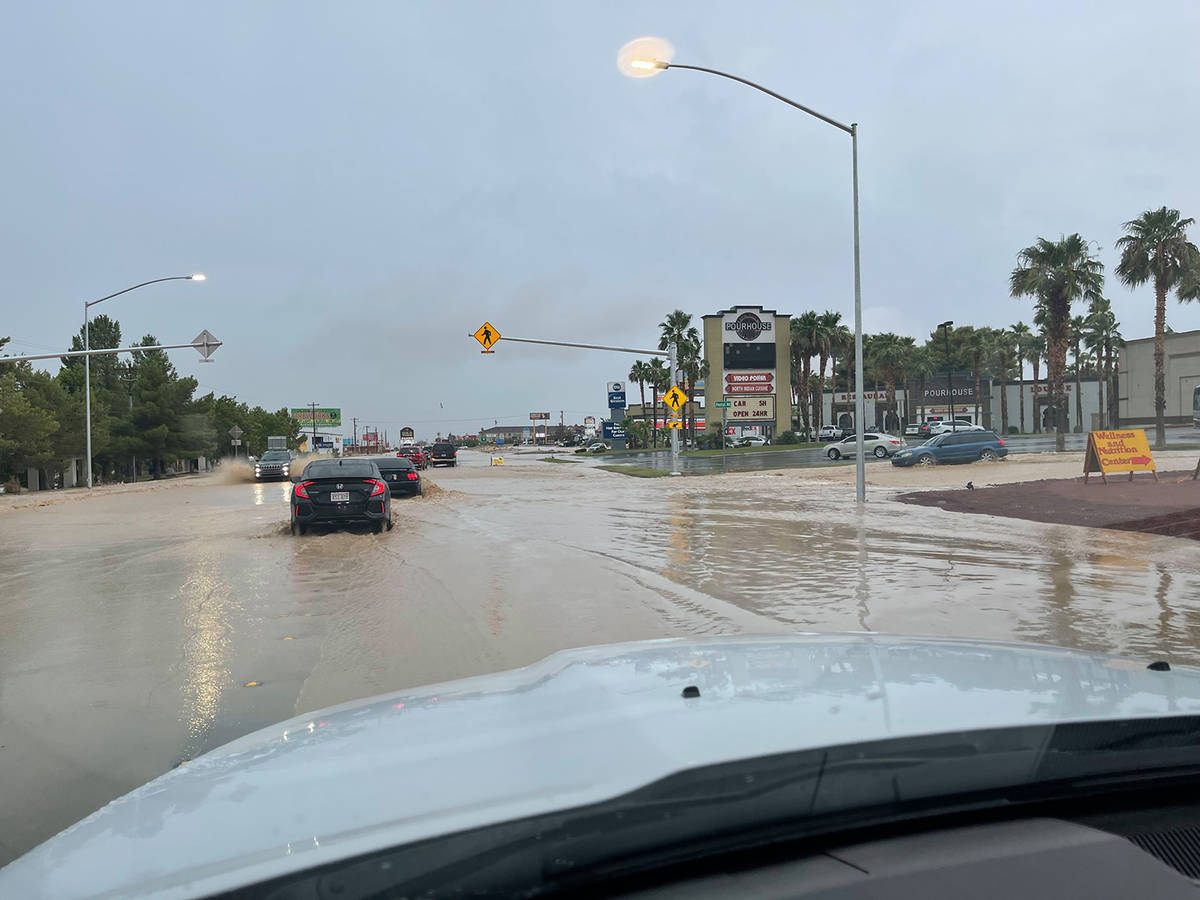 Special to the Pahrump Valley Times Posted to the Nye County Sheriff's Office's Facebook page, this photo shows flooding on Highway 160 at Postal Road in the early afternoon on Monday. 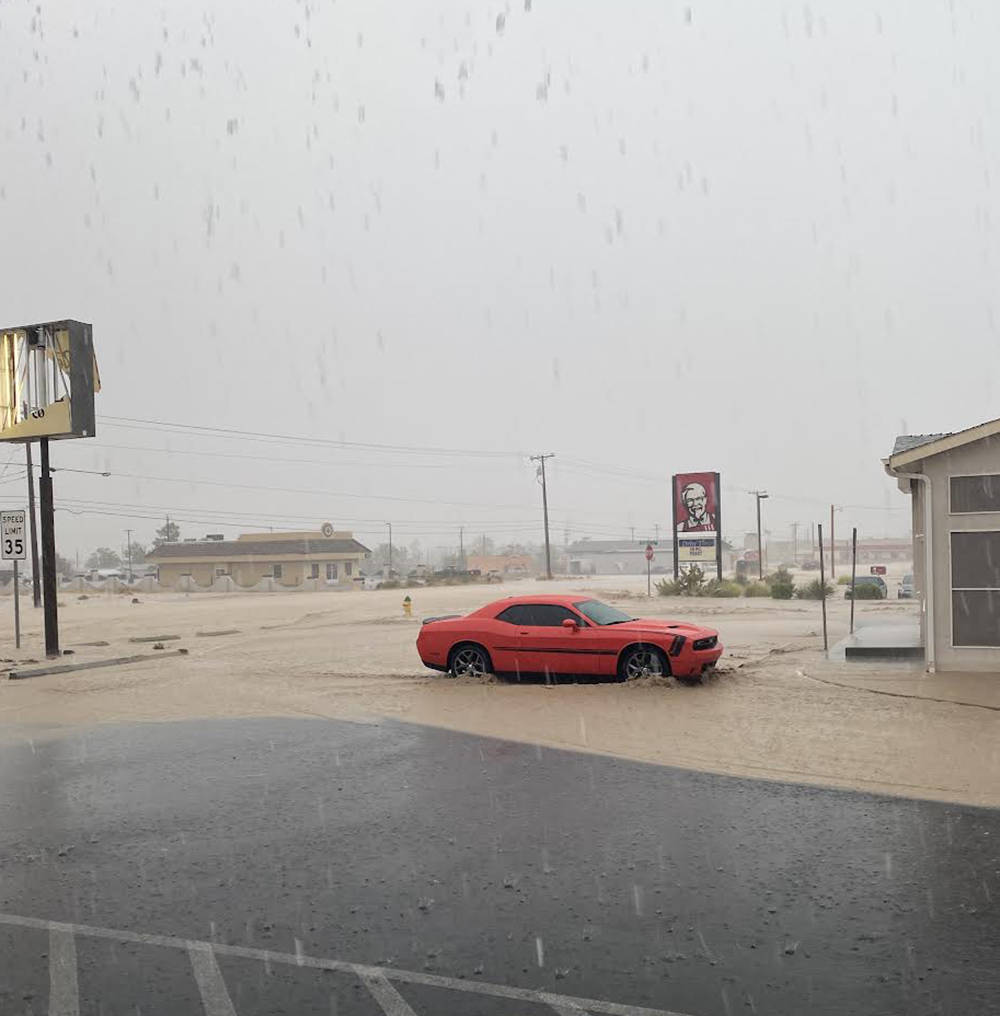 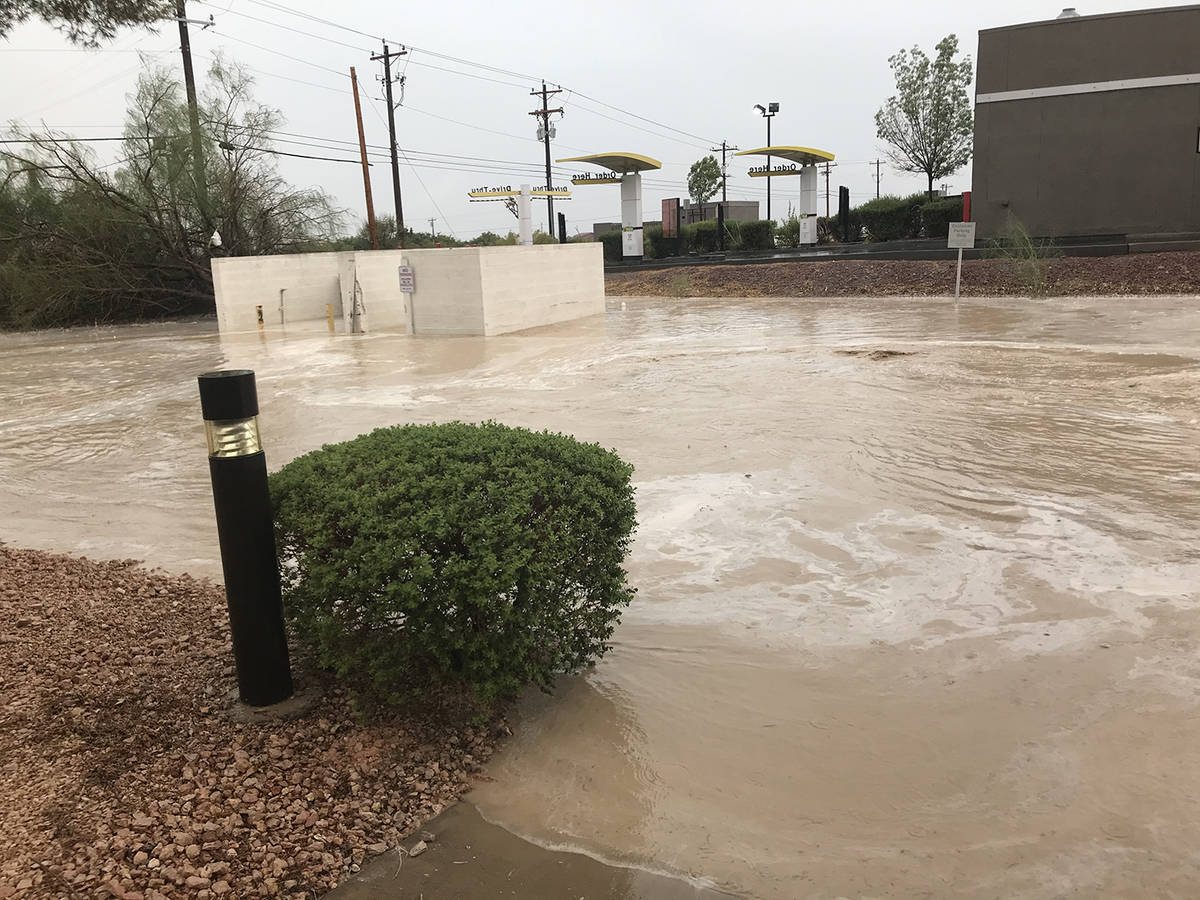 Special to the Pahrump Valley Times More flood waters can be seen accumulating in the Bank of America parking lot. 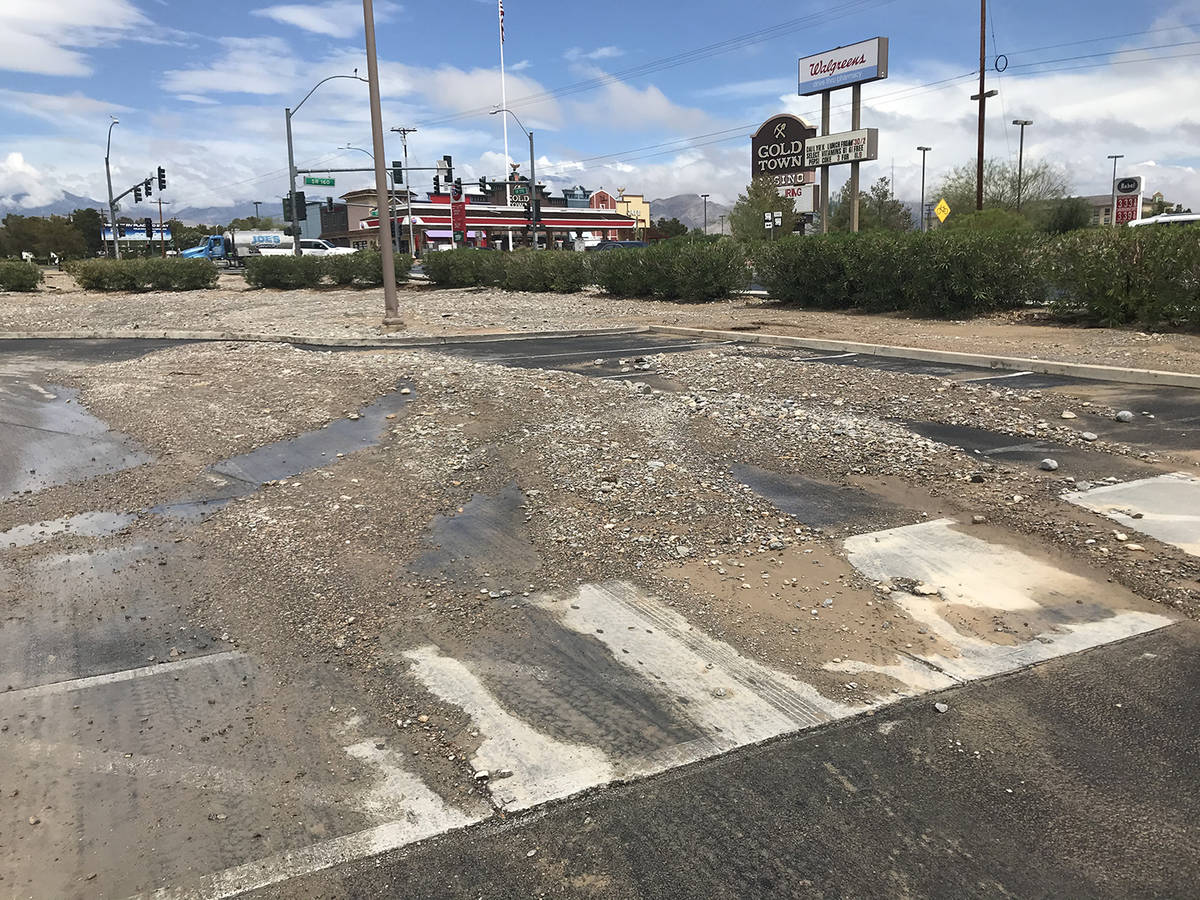 Special to the Pahrump Valley Times The aftermath of flooding resulted in plenty of mud and debris in area parking lots and along roadways. 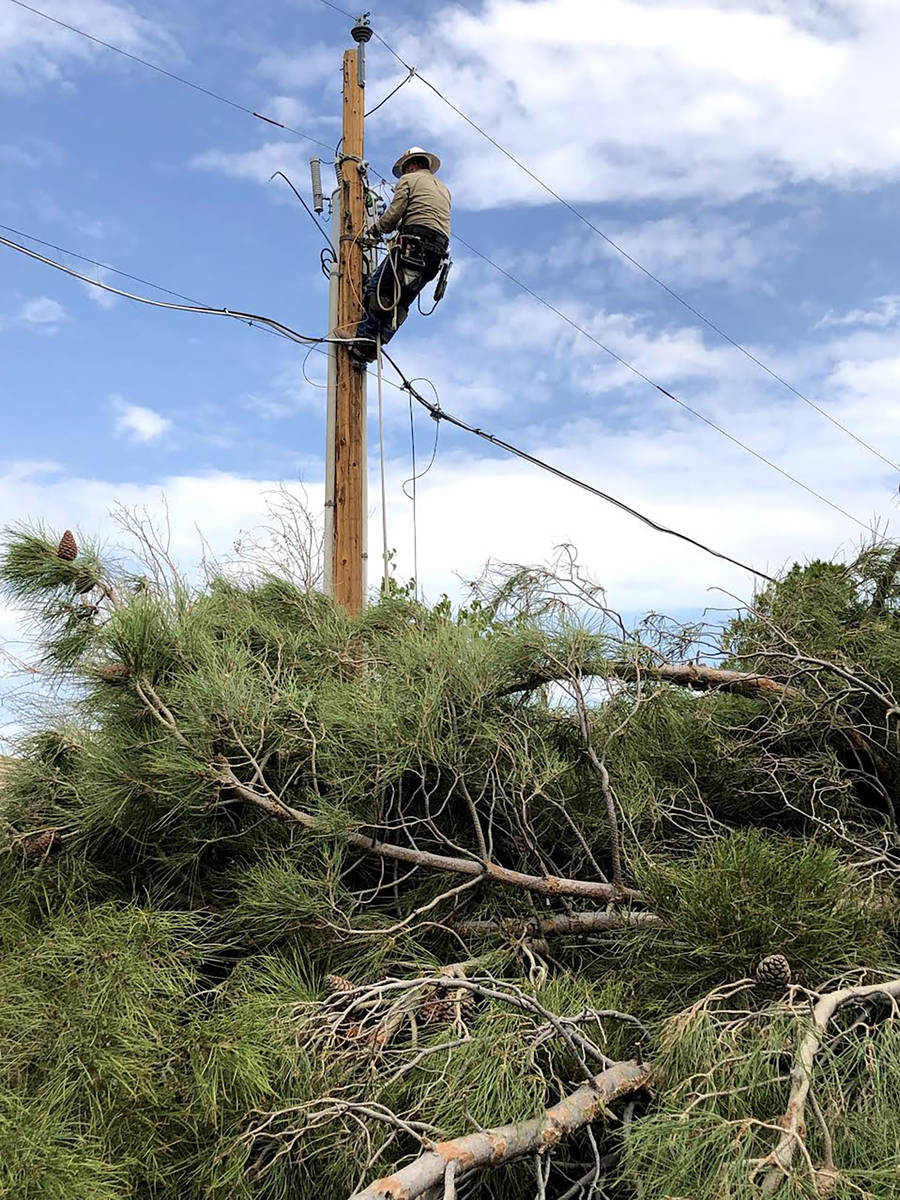 Special to the Pahrump Valley Times Valley Electric offered this photo showing crews addressing power lines that were affected by the storm on Sunday night. 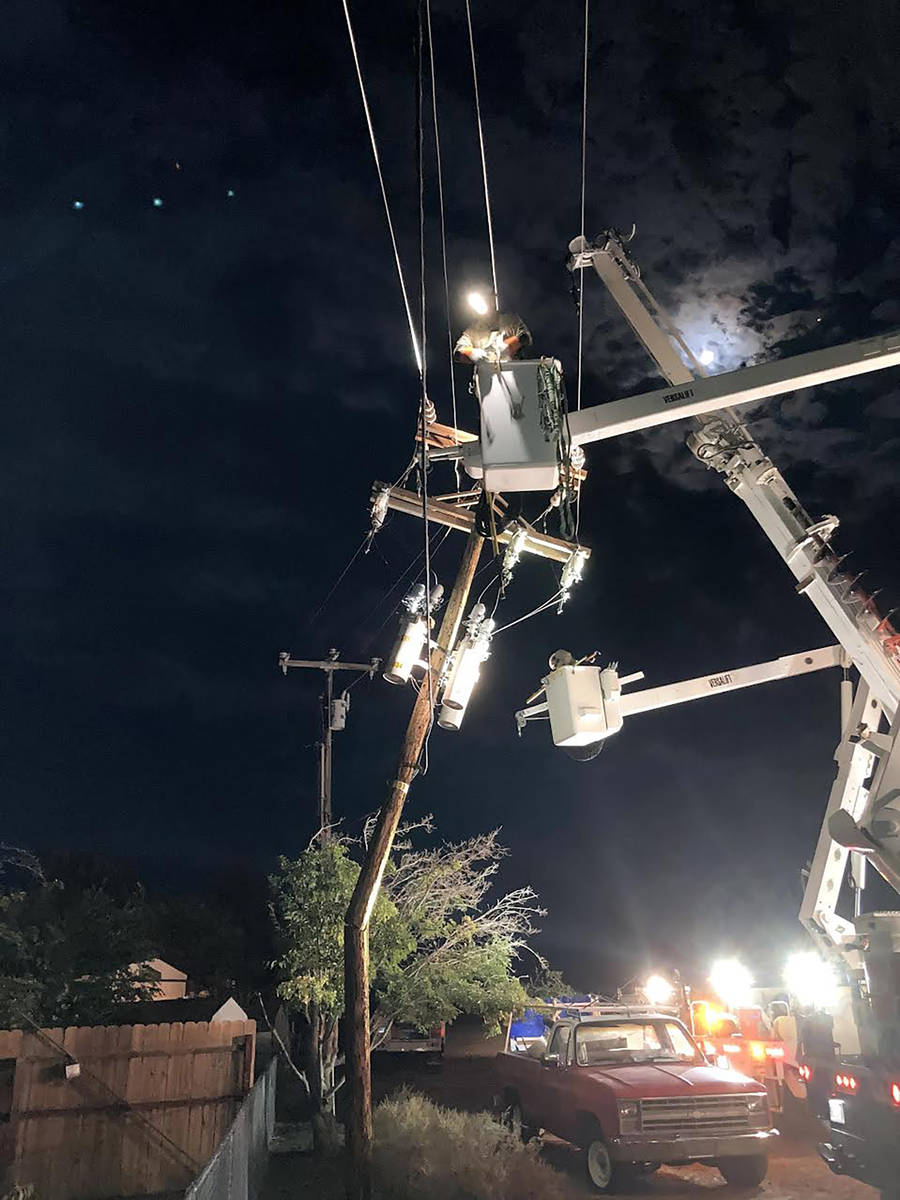 Special to the Pahrump Valley Times Also from Valley Electric, this photo shows a broken power pole, one of many that were in need of repair following Sunday's high wind event.

The Pahrump Valley Times began receiving reports of damage early in the morning on Monday, July 26 which continued throughout the day, with readers submitting a variety of photos and comments delineating the destruction that was sustained over the two days.

The rain started late Sunday evening, causing some incidents of flooding on area roadways and across properties, and the wind was so strong that it uprooted trees, caused destruction to the roofs of local homes, and sent objects hurling through the air, some of which slammed into other objects such as windows, walls and vehicles. Street signs and light poles were knocked over, trash was blown about and the storm caused power outages as well.

“At one point, just over 6,000 members experienced power blinks during the storm, and approximately 2,000 members were left without power during the fiercest part of Sunday night’s storm,” Valley Electric Association Communications and Marketing representative Amy Carlson told the Times. “Those initially without power were restored within hours. Lightning was the main cause of the early outages, however, trees and debris caused 127 members to be without power for 12 hours. VEA crews were on patrol starting at 10 p.m., working out in the storm to get those without power turned back on as quickly as possible. They were faced with multiple trees taking down power lines as well as debris completely severing lines. The crews worked nonstop throughout the night and into the next day, removing trees, repairing poles, slicing line, all to restore power.”

One area of town that was hit particularly hard by Sunday’s winds was Discovery Park, where a large number of sizable trees displayed shattered branches or were ripped up by their roots and lay prostrate on the ground. Tom Oakley, communications and public relations director for Great Basin Water Company, the owner of Discovery Park, told the Times, “Given the storm damage through Pahrump last evening, including downed trees and debris at Discovery Park, we are requesting residents and tourists refrain from entering the park for their own safety at this time. We will be making a complete assessment over the next couple of days and will provide more information once the extent of the necessary remediation is fully understood. Thank you for your cooperation.”

The National Weather Service in Las Vegas told the Pahrump Valley Times that the storm Sunday night began around 8:30 p.m. and continued until about 11:15 p.m. A flash flood warning came not long after the storm hit, issued at 9:06 p.m. until midnight Sunday.

As to Sunday’s winds, the Public Information Statement stated that in Nye County, the strongest gusts were reported in southwest Mercury at 69 miles per hour. Per that report, Pahrump saw gusts up to 64 miles per hour while Amargosa Valley winds reached as high as 56 miles per hour. However, when asked about reports from weather equipment stationed at Pahrump Valley High School, National Weather Service officials did confirm that location had recorded local wind speeds of 78 miles per hour, amounting to those that would be experienced in a category 1 hurricane.

Sunday’s storm cleared up overnight but the skies stayed cloudy and threatening and there was more to come. At approximately 11:30 a.m. the following day, Monday, July 26, the National Weather Service issued another flash flood warning for the Pahrump area, extending until 2:30 p.m. Monday afternoon.

More dousing rain fell on the valley, amid loud rumblings of thunder and flashes of lightning, inundating parking lots with water, flooding area streets and forcing Nye County officials to close their offices due to the extensive flooding that took place.

“All county offices in Pahrump and town of Pahrump offices are closed to the public for the remainder of the business day Monday due to heavy flooding at various government facilities and on roadways,” Nye County Public Information Officer Arnold Knightly announced at 12:40 p.m. on Monday. “The closure includes the courts.”

Area businesses were also impacted, including the Pahrump Valley Times’ office near the intersection of Highway 160 and 372, where flood waters had rapidly accumulated and begun to submerge the bottom portion of parked vehicles.

Motorists attempting to make their way into Pahrump via the northern entrance of Highway 160 were also forced to a stop due to the flooding, with a reader reporting that the highway had been washed out near the Johnny Curve.

Nye County Department of Emergency Management Director and Pahrump Valley Fire and Rescue Chief Scott Lewis was urging people to stay off of the roads for the duration of Monday’s storm, particularly flood-prone streets such as Homestead Road, Highway 160, Dandelion Street and Calvada Boulevard.

Details on Monday’s flash flood warning, updated at 12:35 p.m. that afternoon, showed that the Pahrump Valley received 1.70 inches of rain in just an hour and a half and reported that numerous roads were impassable and heavily flooded. By 12:40 p.m., as the storm continued to track northwest, another flash flood warning was issued, this time for the Amargosa Valley area. Flash flood warnings continued to be issued and updated throughout the afternoon on Monday, effecting Nye, Clark, Lincoln and Douglas counties. Several flash flood watches were also issued, affecting other areas throughout Nevada.

Lewis spoke briefly with the Pahrump Valley Times on Monday afternoon, when rescue crews were still busy undertaking swift water rescues and performing damage assessments in the Pahrump area. He noted at the time that his office had already responded to multiple rescue calls and by Tuesday morning, Lewis said there were approximately 25 total rescues performed.

Total rainfall for Pahrump from Monday afternoon’s storm was reported at 1.87 inches and Monday’s wind speeds in the valley reached 41 miles per hour, the National Weather Service stated.

The storm finally began to abate in the late afternoon on Monday and though there were some minor showers overnight, Tuesday morning dawned bright and clear, with hardly a cloud in the sky.

However, the monsoon season will continue throughout August, allowing for the possibility of additional thunderstorms in the coming weeks. The next chance for rain forecast in Pahrump, according to the National Weather Service, is tomorrow, Thursday, July 29 and into the coming weekend.