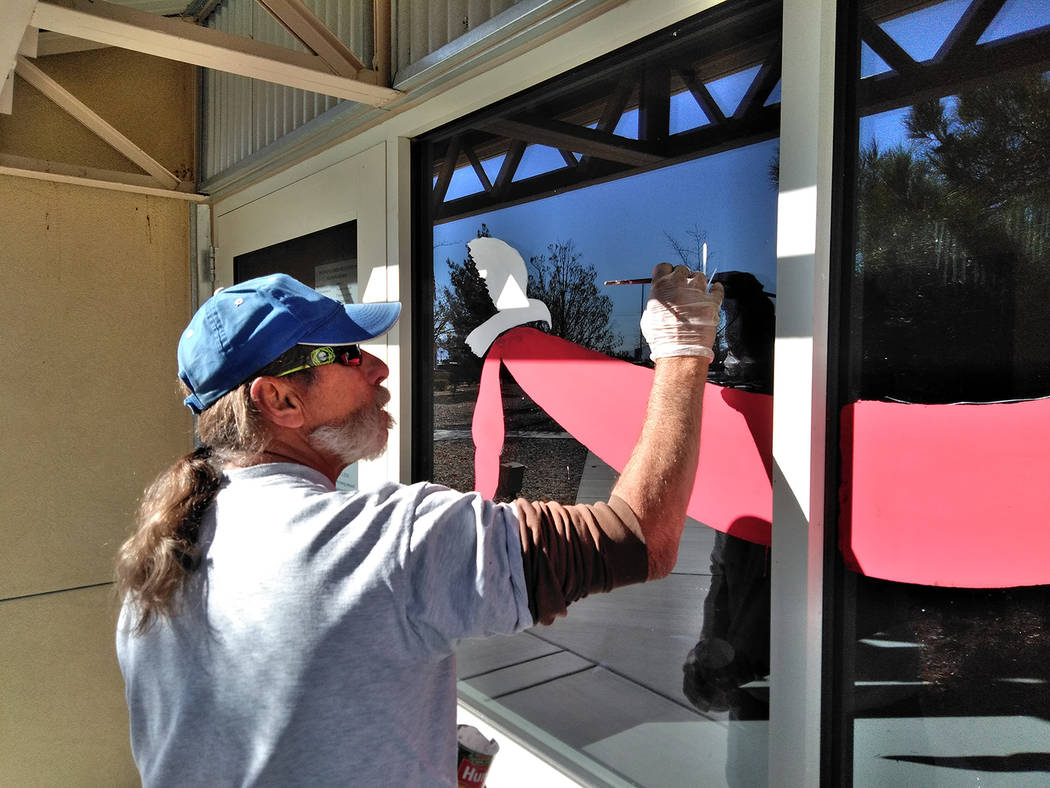 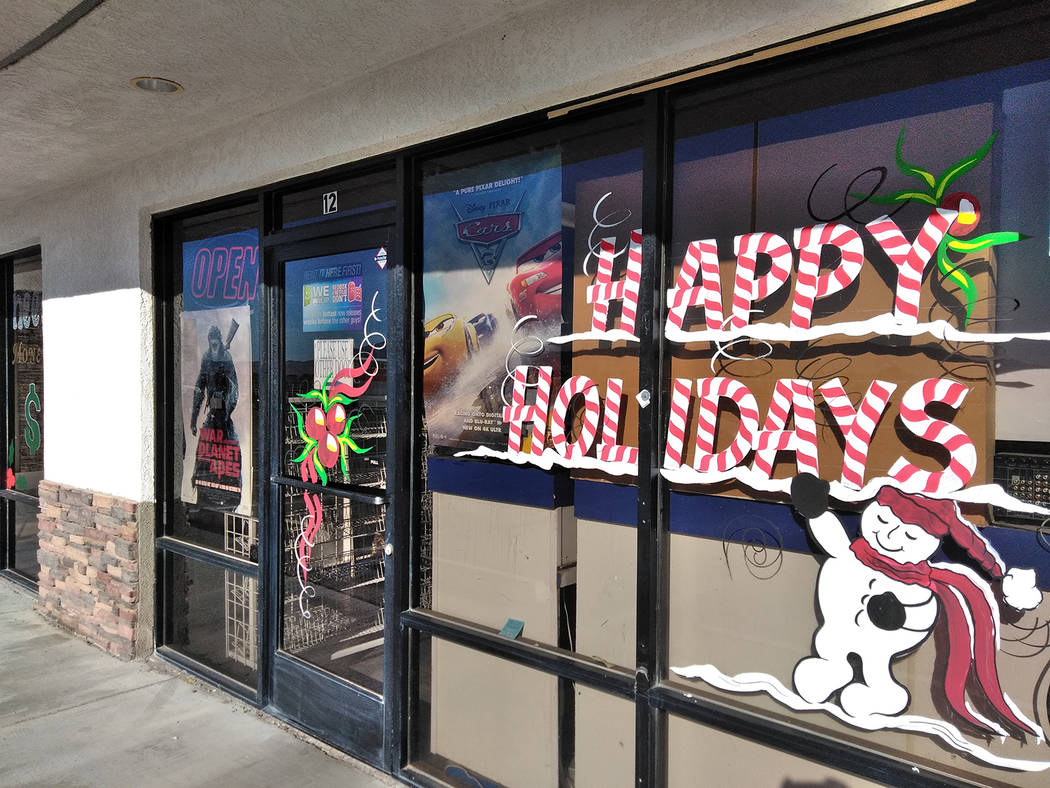 Selwyn Harris/Pahrump Valley Times The holiday artwork of Douglas “Dok” Hembree can be found on many area retailers around the Pahrump Valley, including the Star Lite Video location along Highway 372, and Dr. Leaks’ optometrist location at 2120 East Calvada Blvd. 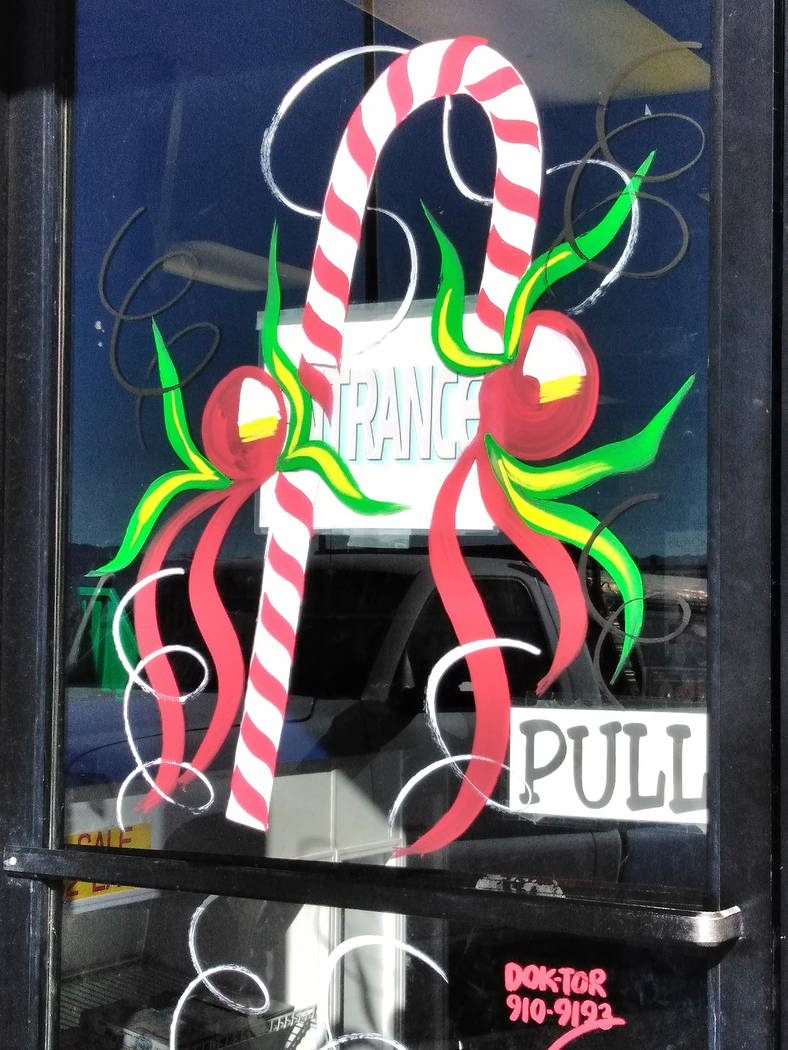 Selwyn Harris/Pahrump Valley Times Hembree’s career in the holiday art business began decades ago by simply going out and knocking on doors of area businesses, inquiring whether the owner would be interested in his Christmas window designs during the holiday season. He has since accumulated numerous businesses and homes for his unique creations.

Even if you’ve never met the man in person, you are bound to be familiar with what he does for a living, if you’ve ever driven around town, or visited just about any business in the valley.

He goes by the name of Douglas “Dok” Hembree and he’s been self-employed in the signage business for more than 40 years.

Essentially, Hembree can paint everything from large billboards, to a simple repaint of a sign on the door of a home or business.

As of late, Hembree’s been focused on painting glass, or more to the point, windows, as he is also a professional holiday window artist.

As such, he’s been quite busy in recent weeks.

“Right now business is going pretty good,” he said recently as he paused from painting a red Christmas bow on the window at the Nye County Courthouse. “When I am out selling Christmas windows, a lot of times, customers that I haven’t seen in many years or even since just last year, want more work done, so I have picked up quite a few more jobs just during the last two weeks of painting my Christmas windows around town.”

Hembree’s career in the business began many years ago with the arduous task of simply going out and knocking on doors asking whether the home or business would be interested in his Christmas window designs during the holiday season.

“After a while, I had more than 50 to do,” he recalled. “I have now been doing this for the better part of 40 years, so this is my busy time of year. Las Vegas and Pahrump is where I normally work. I really enjoy doing my Christmas artwork designs where I can really put it out there within the community. It’s a lot of fun painting Santas and snowmen. The last part of the work involves me painting ‘Peace on Earth’ on the inside of the Christmas design.”

He also paints for nearly all of the beauty salons and numerous smaller businesses in the area.

Hembree made certain to mention that he routinely gets work outside of the holiday season as well.

“I also paint all kinds of signs throughout the year, so it doesn’t matter what time of year it is,” he said. “If they call, I will paint it. Normally, I don’t do much during the spring, but I get a lot of work during Halloween, the Fourth of July, and Thanksgiving. I have also done some artwork based on the movie “Madagascar”, where I drew some penguins. I just went online, pulled up the picture and drew it out.”

Once Hembree’s artwork has served its purpose, he noted that at times, he is requested back to remove his colorful creations.

“For the holiday artwork, I usually tell the customer that I’ll have it cleaned up by the second or third of January,” he said. “I usually come out on New Year’s Day and begin cleaning up the windows, so when they come back to work they are all clean and finished. The cleaning process is quite simple. All you do is spray a little water on it, use a 4-inch razor blade, and it comes off like butter. I just wipe it on a rag. There is not much by way of elbow grease needed.”

Additionally, Hembree said he’s taken on a little assistance, as a couple of artistic family members sometimes join him at the worksite.

“I don’t do everything by myself, because my daughter, Desirae Hembree, helps me every once in a while, as well as my son,” he said. “Desirae is a senior at PVHS, but she comes by the site and does just about all of the grunt work. We really work very well as a team and she has never taken an art class in her life. She also does scrapbooking, and she can make you a great-looking scrapbook that will last forever.”

Prior to Hembree immersing himself in the world of art, he worked from time to time with his dad.

“Before I started in this, my career was all about knocking out dents in cars for $4 an hour with my father,” he said. “I got started in this because my dad was also a sign painter. My first sign that I painted earned me $5 an hour. I decided I could only go up, so I just started knocking on doors and taught myself how to paint signs. My very first piece of artwork involved pin-striping a Chevrolet El Camino.”

Over the years Hembree’s customers have been very satisfied with his work, which he said is why they call him back each year.

Aside from small area businesses, Hembree has worked for multi-billion dollar clients, over the years as well, he said.

“I painted the Stardust sign, that looks like a diamond, twice,” he recalled. “I also painted the Bellagio freeway sign, which was a four-month project. I painted the lollipop at the Circus-Circus Hotel Casino three times and I painted all of Mordechai Jewelers’ signs back in the 80s. I was painting signs freehand in Las Vegas for 20 years.”

As a parting shot, Hembree said there’s not many individuals in town, successfully doing what he and his family have been doing for decades.

“There is just one other person doing this but they don’t do as many as I do throughout the year,” he said. “I prefer not to give away my secrets because there is a lot involved in this. About 10 years ago, a lady out of New York came and did an interview with me where she took pictures of all of my work in Las Vegas. I have never seen the book, but I know I am in it.”