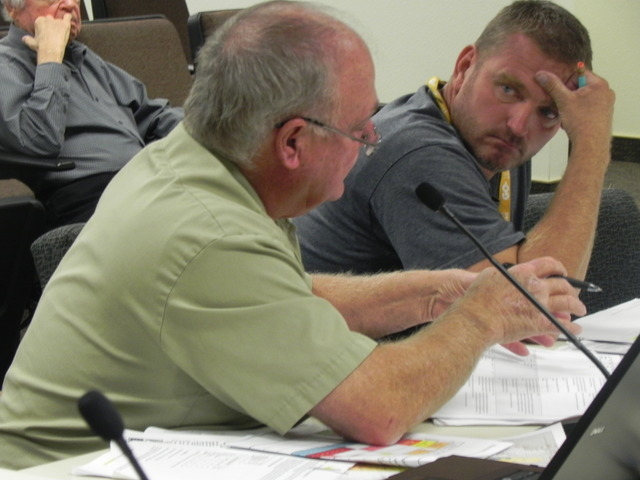 Murphy said his family owned over 400 acres and wanted to preserve the grandfathered status of their gravel pits. He got another chance last week, after Nye County Commissioners in September kicked the master plan back to the RPC for more consideration.

The RPC last Wednesday approved 44 changes to the future land use map and 59 changes to the text amendments. Murphy got some master plan designations changed to commercial development areas. The plan aims to master plan areas based on their availability of infrastructure and ability to develop with an eye to conserve precious natural resources like water.

Master plans are guides to development over the next 10 years, not zoning.

Murphy had concerns over the master plan closing down his gravel pits, which are a grandfathered use on 40 acres east of Highway 160. The RPC voted 4-2 to agree with planning staff and designate it as a rural density residential zone which permits a rural homestead 9.5 zone with a minimum of 9.5 acre lots, in which a gravel pit is allowed with a conditional use permit. Murphy said UICN service territory is only a quarter-mile away, adding he maintains the roads himself.

“My concern is my grandfather will go away one way or another. I would like the property master planned for what I’m using it for and have used it for the last 25 years,” Ron Murphy said.

Nye County Planning Director Darrell Lacy said when the gravel pit eventually closes, the area will have residential zoning. Ron Murphy predicted it will still be a gravel pit for a long time to come.

“The valley is full of hydro-collapsible soil. You have to have gravel. So the gravel pits aren’t going to go away,” his son Ronny Murphy said.

Carrick “Bat” Masterson said if the property was rezoned for a commercial development area anything from a steel manufacturing plant to a salvage yard could be located there. He said there was also residential and business zones in the area.

Ron Murphy was all right with a suggestion to master plan 40 acres of his land abutting the Rene Morales gravel pit on the south side of East Simkins Road as rural industrial area. A 40.7-acre parcel owned by the Murphys on the northwest corner of Warren Street and Betty Avenue with another gravel pit, will be rural density residential.

Ron Murphy made a plea for changing a rural density residential master plan for a couple of parcels on West Basin Avenue between Linda Street and Lola Lane in an area of mainly single-family zones.

The RPC voted to allow commercial development for some of Murphy’s 16 parcels near the southeast intersection of Blagg Road and Irene Street that were fronting on the street, but not parcels on unimproved roads. The original version of the revised master plan was changed to allow another four parcels on Blagg Road between Gemini Drive and 2T Ranch Lane across from the dairy to be commercial development areas.

The former site of the Pahrump Dairy itself, five large parcels totaling 300 acres, were also changed from a rural density residential zone to commercial development areas. Planners originally suggested lower density development, since the property has to be annexed into the Utilities Inc. of Central Nevada service territory, the location is in a flood zone and other reasons. The property owner, BPVL1 LLC, is tied to Focus Property Group founder John Ritter. Another 38.82 acre parcel on Irene Street west of Ernest Way was also master planned for commercial development.

“We have several parcels in the valley in our investment group that we are in the process of developing,” property owner Mason Harvey told the RPC, the registered agent and manager of Pahrump Lands LLC. “Under the original proposed land use plan it looked like it prohibited development of those parcels. After having discussion with staff these recommendations really work with our plans.”

The RPC also approved a staff recommendation to change 38.5 acres on Desert Trails Boulevard between Blagg Road and Highway 160 owned by Bernard Hoffman and Rich Rappaport from a rural density residential master plan to a commercial development area. The property is within the Desert Utilities service territory and within a moderate or minimal flood zone.

Chuck and Nancy Bailey, owners of Pahrump Valley Recycling, successful persuaded the RPC for a master plan designation of business industrial area for a 2.1-acre parcel fronting on East Mesquite Avenue which had been planned for low density residential. The Baileys pointed to the federal detention center and county landfill down the street. They have intentions of using it for a heavy equipment lay down yard.

The RPC voted to leave a couple of parcels on Manse Road south of Mountain Falls subdivision as rural density residential, overruling a staff recommendation to change it to commercial development area. Koenig wanted a better look at this area which could develop soon. Real estate broker Kim Washington with Access Realty, wrote, “From Hafen Ranch Road to Homestead this road is a very highly trafficked road. I would object to this being zoned residential as I live a block off Manse and witness the high traffic for myself. This makes no sense to change the zoning to residential.”