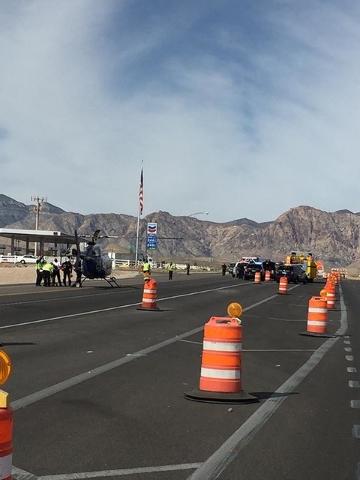 With the amount of road work that goes on in the Silver State, no matter where you are in Nevada, drivers should yield to caution in work zones.

To remind drivers about the dangers of driving through construction areas on roadways, the Nevada Department of Transportation and Nevada Highway Patrol are teaming up to remind motorists during National Work Zone Awareness Week.

Taking place through April 15, the goal is to educate motorists on safety precautions that should be taken while passing through a roadway construction area.

“NDOT and our transportation partners strive to provide safe mobility for all motorists,” said Rudy Malfabon, NDOT director. “Drivers need to slow down, be aware and safe through work zones, which are designed to provide motorists with smoother, more pleasant commutes.”

Just last week a bicyclist was struck by a vehicle in the beginning portion of the State Route 160 widening project near State Route 159 in Las Vegas heading to Pahrump. The cyclist had to be airlifted to a Las Vegas-area hospital.

This incident magnifies the points NDOT and NHP are trying to relay during work zone awareness week.

NDOT said the crash was caused by the cyclists riding within the barrels east of the intersection, and cut across the through lane to go to the gas station on the other side of the highway without yielding to the westbound vehicle that struck him. The crash demonstrates that cyclists and motorists need to be more aware in work zones.

NDOT reminds drivers that they are required to slow down for bikes, share the lane, and not pass until bikes have pulled into the pull-outs in the SR-160 construction zone.

NDOT aims to maintain a safe work zone environment through the use of protective barriers, warning signs, lower speed limits, lane closures and flaggers. Road construction activity is also often scheduled during nighttime and off-peak hours to have work done with less drivers on the road.

“Zero fatalities is the only acceptable option on Nevada roads,” said NDOT spokesman Tony Illia. “Drivers can achieve that goal by slowing down, buckling up and staying focused on the road, especially through work zones which can carry double penalties and fines.”

Nevada law doubles the penalty for speeding in a work zone, up to $1,000, in any marked road construction or maintenance work zone when workers are present.

National Work Zone Awareness Week is sponsored by the Federal Highway Administration to bring national attention to motorist and worker safety and mobility in work zones.

• Always buckle up and don’t drive while impaired or sleepy.

• Minimize distractions; hand-held cellphone use is illegal while driving.

• Watch for lane/ramp closures and detour signs; be prepared for lane changes or merges as directed by road signs or flaggers.

• Pay attention to work zone signs, even when passing through long-term work areas.

• Plan ahead, giving yourself enough time to safely reach your destination.