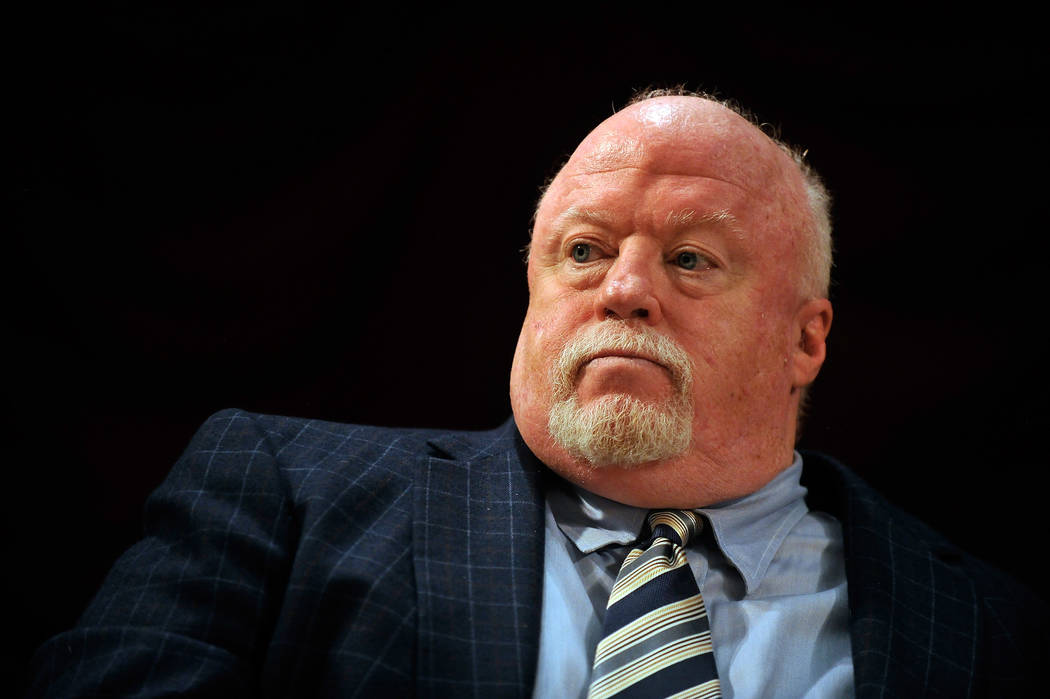 (David Becker/Las Vegas Review-Journal Dan Hart, political consultant advising the Nevada State Education Association, listens to the other speakers during the monthly Hashtags & Headlines luncheon at the Texas Station on Monday, May 19, 2014.

The recent Democratic primary was a setback for progressives, and the governor’s race will come down to which candidate voters trust.

“Among most candidates who were running in the Democratic primary, there was a fight over who was the more progressive,” said Hart while filming Nevada Politics Today. “Clearly, the people who were more progressive didn’t do as well as they expected to. It was a different sort of electorate.

“Our turnout was lower than everybody expected. We didn’t see a blue wave of young people or non-traditional voters come to the polls.”

Hart said several factors contributed to the lower turnout, including UNLV being out and people on vacation. He expects a significantly higher turnout in November.

While Democrat gubernatorial nominee Steve Sisolak ran a very liberal primary campaign, Hart anticipates that he’ll “come back to the middle” for the general election.

“That’s the way you calculate campaigns, because you are going to move to the middle and make your appeal broader as to more narrow,” said Hart. While policy will play a part, Hart sees a question of character deciding this race.

“The fundamental issue that I believe that this race will be decided on … [is] trust.” said Hart. “So which of the candidates do you trust?”

Hart said Rep. and Senate candidate Jacky Rosen isn’t “well defined in people’s minds. And I think she’s going to spend some time and money defining herself. She did a little bit of it in the primary, but not enough. People have to know her.

“The Senate race is much more affected by what happens in Washington than say the governor’s race, which is much more about trust and the economy.”

In Congressional District 3, Danny Tarkanian’s close association with Trump is going to be a major factor in his bid against Susie Lee.

“Danny has been a Trump person. So the ups and downs of what the president is going through will affect Danny’s viability,” said Hart. “The better Trump is doing, the better Danny’s chance.”

Proponents of the energy-choice initiative face a “bigger burden” than opponents, because “it’s easier for a voter to say no to something, because they aren’t changing anything.”