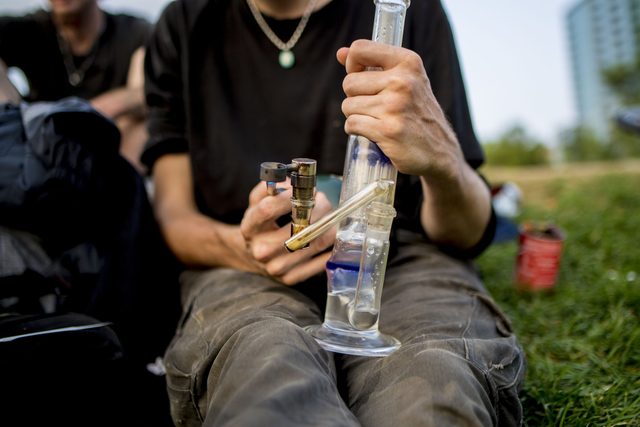 The mad rush to legalize recreational marijuana should give us pause, but that seems not to be the case.

Nevada, along with Arizona, California, Massachusetts and Maine, is trending toward legalizing pot next month, according to recent polls cited by The Washington Post.

In the Silver State, 57 percent of Nevada residents support legalization through state ballot Question 2, while only 33 percent oppose, according to a recent poll of likely voters conducted by Suffolk University in Boston.

These five states would join Colorado, Oregon, Alaska, Washington and the District of Columbia, which have already legalized the drug.

In the New York Times earlier this month, Timothy Eagan, whose work I enjoy, wrote this alarming sentence:

“Though (marijuana) legalization is not without its problems — a spike in emergency room visits attributed to edible pot, persistent black market dealers — it’s mostly been no big deal.”

That seems to be a statement that is too early to be made because this rush to legalization is happening with little scientific research on the risks to public health.

Colorado, which began its recreational marijuana industry in early 2014, has shown some alarming trends that should be given more time to play out before Nevada runs headlong into the fray.

While marijuana sales are regulated to adults 21 and over, there has been an increase in youth use between age 12 and 17 in Colorado that cannot be ignored. The state now ranks first in the nation in youth marijuana use, increasing 20 percent in two years since legalization. That is up from 14th in the nation in 2006. According to a national survey by the federal Substance Abuse and Mental Health Services Administration, nearly 12.56 percent of Colorado youth used marijuana within the past month, far and away the highest percentage.

By comparison, Nevada is at 8 percent.

How legalization would impact the social health of Nevada, let alone Pahrump and Nye County, which is already suffering from poor access to quality health care, is unknown.

According to a five-year study at Penrose-St. Francis Hospital in Colorado Springs, there has been a sharp increase in emergency room patients who have used cannabis, increasing from 545 to 2,042, between 2009 and 2014. Hospitals are also struggling with collecting millions of dollars in unpaid medical bills tied directly to these patients.

And Colorado is ranked 12th in overall health care, including a ranking of 17th for access to health care, according to a report in September by WalletHub.com. I travel to Denver as often as twice a year to visit my endocrinologist, one of the top thyroid cancer researchers in the world.

Nevada ranks 48th in overall health care, and 45th in access to health care. Add to that the report by the Robert Wood Johnson Foundation and the University of Wisconsin Population Health Institute that Nye County is ranked near the bottom of the state as being the most unhealthy.

While Pahrump has emergency medical facilities, areas such as Amargosa Valley, Beatty and on up north through the county do not. Even residents of Tonopah, the county seat, have to travel nearly 100 miles to receive emergency care after their hospital closed last year.

These warning signs point to a public health crisis just waiting to happen.

Nevada’s ballot proponents champion that the industry will raise funding an estimated $20 million annually for marijuana industry enforcement and schools, as well as another $30 million in state and local sales tax revenue. Comparing it to alcohol, ballot proponents state, “It’s time to stop punishing adults who use marijuana responsibly.”

But are we willing to exchange a law enforcement problem and a potential increase in tax revenue for a public health care problem that could end up eating away at the new revenue?

According to Question 2, the county would be allowed two retail marijuana store licenses, but Nye officials could petition the state Department of Taxation for more.

While the sale of marijuana would be limited to persons 21 years or older under state law, do we think it would be that hard to get for minors (see our experiences with beer in high school).

There is another issue hanging over legalizing marijuana anywhere in the United States, even the medical variety: marijuana remains a Schedule 1 drug under federal law. This means that it is viewed as a dangerous drug by the federal government with no medicinal value and is illegal. True, the Obama administration has not stepped in areas that have legalized recreational marijuana, or the 25 states, including Nevada, that have medical marijuana.

And presidential candidates Hillary Clinton and Donald Trump have given no indication that they will change that course. But as long as it remains Schedule 1 – on the same level as LSD, heroin and ecstasy – then the danger remains that a new administration in four-to-eight years could reverse course on marijuana and dismantle the entire industry.

There have been efforts by members of Congress to reschedule marijuana, including by U.S. Rep. Dina Titus, a Democrat from Nevada, but none are close to changing the federal laws, yet.

While I support medical marijuana, I will be voting against Question 2 because I don’t believe there is a large enough sample size on marijuana’s impacts, good or bad, to support legalization at this time.

Besides, what’s the hurry? Give the industry more time elsewhere to get a more balanced look at the pros and the cons.

Arnold M. Knightly is editor of the Pahrump Valley Times and the Tonopah Times-Bonanza & Goldfield News