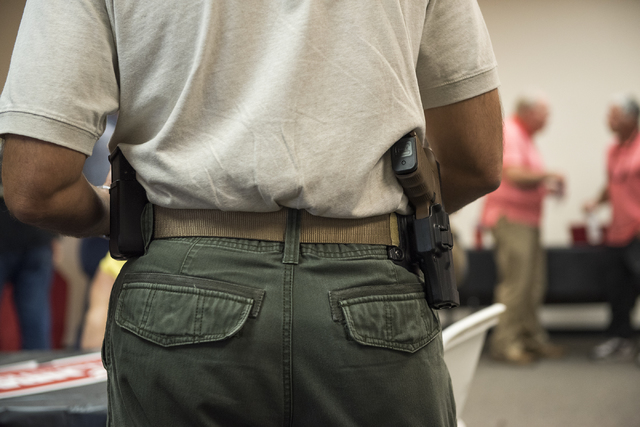 Martin S. Fuentes/Las Vegas Review-Journal Letter writer Paul J. Miller says that we should consider that armed citizens commonly seen all over town as an excellent deterrent to crime.

Responsible gun carrying is security for all of us

I am writing this as a Nevadan 69 years of age and a 23-year resident of Pahrump. Particularly, I am one of a growing number of folks who conscientiously wear a sidearm responsibly for the security of all in a potentially dangerous time. For the newcomers to town, they will quickly learn that Nevada is an open-carry state. This means that convicted felons and those convicted of domestic violence aren’t included. If your record is clean of this sort of thing, you may wear an open-carry sidearm without a license or permit.

Many long years ago I was certified as a firearms instructor by the National Rifle Association and lots of practice has honed my skills. I am not the only one with skills and dedication hereabouts, however. There are plenty of us. Whenever I meet someone packing a sidearm I happily congratulate that person as this is my way of encouraging Americans to uphold the Second Amendment and to contribute to generally discouraging crime wherever we go.

Now here is the bonus we who carry our sidearms should be especially aware of. We should consider that armed citizens commonly seen all over town are an excellent deterrent to crime. And most importantly, the time may come when one of us may have the opportunity to assist an officer who may be hard-pressed and in danger. My mindset is precisely consciously aligned with this possibility. Such a situation of this type certainly would be rare, but not impossible. We should all be real citizens every day.

One day in the Pahrump Library a lady asked me if I would protect her if she were attacked there. I told her that it was highly unlikely what she suggested would happen. But, I humbly assured her I would do my best if necessary. We all should be ready to do our best. The Pahrump Flagman, Ray Mielzynski, wears sidearms. I am sure he would be pleased if more of us did also.

Last year the Social Security Administration increased our benefit “because of a rise in the cost of living”. However, they increased the Medicare deduction by the same amount so that the net benefit was the exactly same as the year before.

They did the same this year, but there must have been a clerical error somewhere because the net benefit is one dollar more than the year before.

Wow, one whopping dollar for the whole year to compensate for inflation. We’ll try to be prudent and not spend it all in one place.

Our elected representatives in Congress, with the emphatic support of our hopefully soon-to-be ex-president, have pushed through a tax “reform” bill that will result in a massive transfer of wealth from the middle class and poor to the giant corporations and filthy rich. It will also increase the budget deficit by over a trillion dollars and take away health insurance for millions of people.

According to the latest poll, only 29 percent of Americans support the bill, and there are massive protest rallies all over the country opposing it.

Aren’t our elected officials supposed to represent the interests of their constituents instead of serving the billionaire donors who finance their election campaigns? Am I the only person who thinks that there is something wrong with this picture?