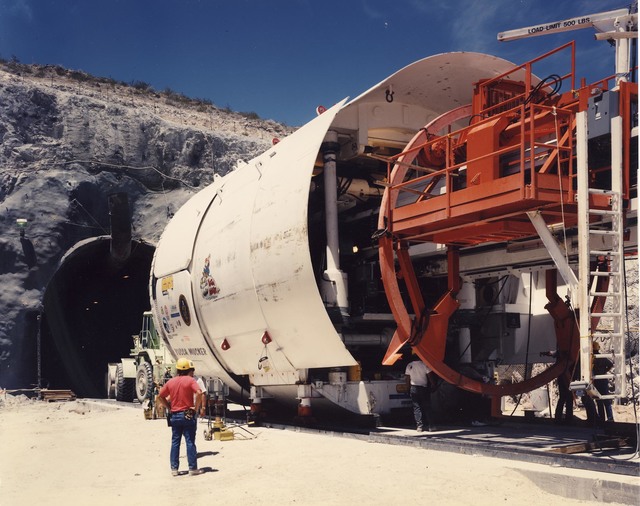 The Yucca Mucker, which bore the tunnel through Yucca Mountain for a nuclear waste repository in this undated photo. Courtesy of the U.S. Department of Energy

The retirement of U.S. Sen. Harry Reid, a new U.S. president, and a Republican-controlled Congress will bring changes to the nation. What will they mean for Nevada’s Yucca Mountain Project? In this, the first part of a two-part column, we lay some groundwork for understanding the current opportunity.

Proof that matter could be converted into energy resulted from an experiment by the Italian physicist Enrico Fermi in the football stadium at the University of Chicago on December 2, 1942. This insight quickly led to the development of electricity-producing nuclear power plants and the development of nuclear weapons.

The first civilian nuclear power plant was built not far from Moscow, Russia, in 1954 and had a total electrical capacity of 6 megawatts. Two years later a reactor was constructed near Simi Valley, not far from Los Angeles, that produced power for 1,100 homes.

In May of 1958, the world’s first nuclear power plant whose sole purpose was to produce commercial electricity was turned on at a site located on the Ohio River about 25 miles from Pittsburgh. Named the Shippingport Atomic Power Station, it had a capacity of 68 megawatts and demonstrated to the world that nuclear power could safely produce electricity in large commercial quantities. And it produced—no dirt, no smoke, no cinders, and no carbon dioxide to warm the planet, just good clean electric power. The plant was closed in 1983, decommissioned in 1988, and the site cleaned up. Today it is as though it had never been there.

Two large problems are associated with the production of commercial nuclear power. The first is that generating electricity using energy from the atom leads to the accumulation of nuclear waste, spent fuel that remains highly radioactive at the completion of the cycle, which must either be reprocessed and used again or permanently and safely isolated from the environment for thousands of years. Either way, the entire nuclear power production cycle requires careful management at every stage of the operation. In 1974 and 1975, under Presidents Gerald Ford and Jimmy Carter, the United States stopped reprocessing, resulting in the need for geologic disposal for management of its spent nuclear fuel.

The second large problem with commercial nuclear power is the far-too-common lack of public understanding of the demonstrated safety of nuclear power at all stages of production. In the U.S., neither government at any level nor the private sector has made a significant effort to educate the public about nuclear power’s safety.

Public ignorance and misinformation have been widespread since the beginning.

Such lack of understanding looms large as it becomes increasingly evident that, if modern society is to maintain a high standard of living and a healthy planet, nuclear power must pay a major role in production of electricity worldwide. There is great need for public education on nuclear power’s proven safety. There is no safer source of commercial electric power.

After years of discussion and no successful effort at developing a comprehensive permanent solution to the disposal of our nation’s high-level nuclear waste, Congress finally came up with a plan. In December 1982, Congress passed the Nuclear Waste Policy Act and President Ronald Reagan signed it into law. It was a landmark piece of legislation that had the potential to permanently solve the nuclear waste disposal problem.

The Act called for the careful selection of two geologic sites in the United States in which the nation’s high-level nuclear waste could be permanently and safely entombed for thousands of years. Several candidate sites were to be studied, from which the final selection of the first site was to be made.

As Michael D. Voegele and Donald L. Vieth wrote in their recently published monumental two-volume history of Yucca Mountain titled “Waste of a Mountain,” available at the Pahrump Valley Museum, “The Act codified the federal decision to pursue geologic disposal, provided a mechanism to close the commercial nuclear fuel cycle, and supported the ultimate deposition of defense high-level waste” (p. 196). It set a schedule for “siting, construction, and operation of repositories that will provide reasonable assurance that the public and the environment will be adequately protected from hazards posed by high-level radioactive waste and such spent fuel as may be disposed of in a repository” (p. 197).

The Act provided for, among other things:

A decision-making process that would be recognized as politically legitimate. A state could notify Congress of its disapproval of selection, which could be overridden by a majority vote in both houses of Congress.

Regionalism—a second repository was to eventually be constructed in the Eastern U.S.

It established a nuclear waste fund to pay for the storage effort with a tax on nuclear power producers.

By 1987, the candidate sites for a high-level nuclear waste repository had been narrowed to three: one each in Washington state and Texas, and Yucca Mountain in Nevada. That year, in what came to be called the “Screw Nevada” bill by some Nevadans, Congress amended the 1982 law and selected Yucca Mountain as the only candidate for further study.

Many in Nevada saw this as a discriminatory action against a state with a small population.

In response, some Nevada politicians protested the legislation, and a few built their political careers around the bill with long-held vehement opposition to the construction of a repository at Yucca Mountain. Notable here was then-Nevada Congressman Harry Reid, who rode his Yucca Mountain opposition to a career in the U.S. Senate. For years, Harry Reid and his supporters in Congress threw every impediment to the study of Yucca Mountain they could come up with. In 2007, Sen. Reid became Senate Majority Leader, with considerable power over passage of all federal legislation. Fate intervened for Sen. Reid when Barack Obama became president in 2009.

By that time all the necessary research, costing billions of dollars, to determine the viability of Yucca Mountain as a permanent storage site for high-level nuclear waste had been completed. It was now up to the Nuclear Regulatory Commission to evaluate that research and make a final decision on whether or not Yucca Mountain was acceptable and, if it were, to begin construction of a repository. Without the NRC’s evaluation, a decision could not be made, the program would be stymied and the entire effort unable to move forward.

Though President Obama was from Chicago and high-level nuclear waste was being temporarily stored at nuclear power plants in northern Illinois, not that far from Chicago, the new president, urged by Senator Reid, withdrew the necessary funding to complete the evaluation of Yucca Mountain’s acceptability. Because of Reid’s actions, funds for the evaluation have not been provided since 2009.

All this, of course, was contrary to the intention of the Nuclear Waste Policy Act of 1982. The effect of Senator Reid’s opposition to Yucca Mountain has been to block our nation’s effort to permanently store its high-level nuclear waste, at the cost of billions of dollars, dampen ongoing efforts to further develop nuclear power, and, I would argue, do incalculable damage to the environment.