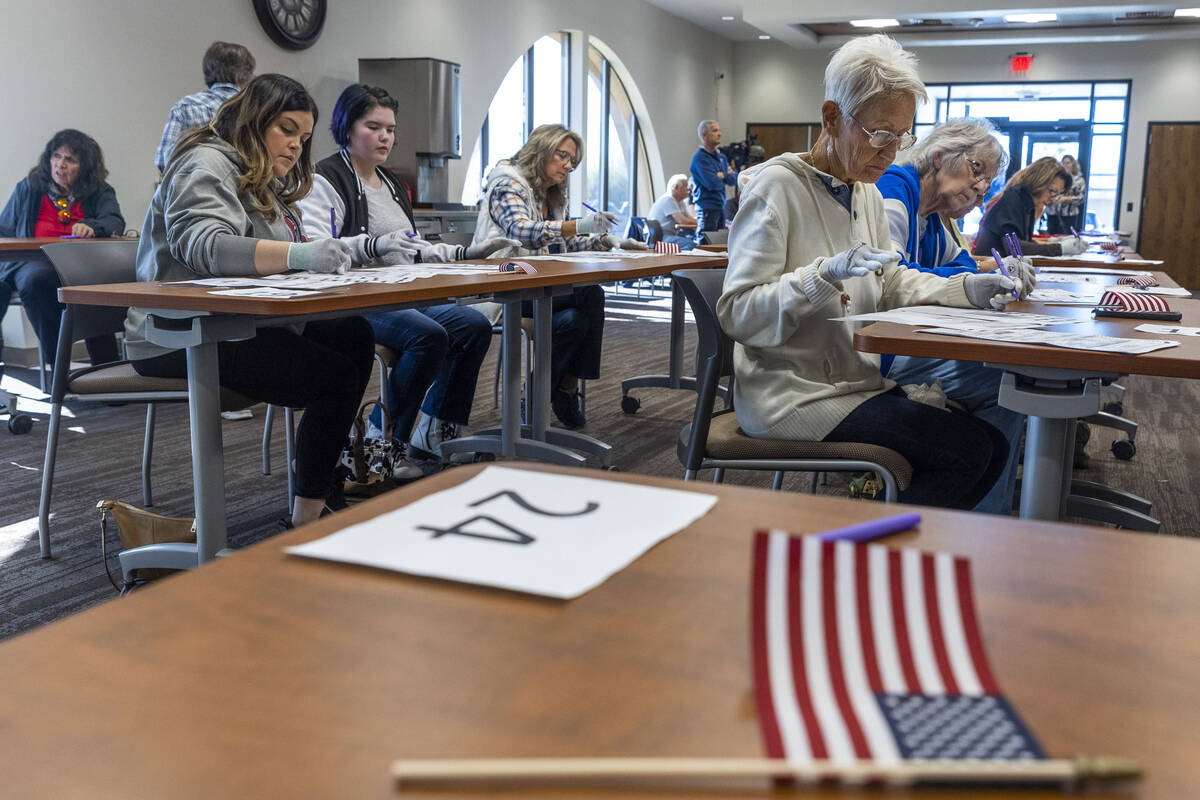 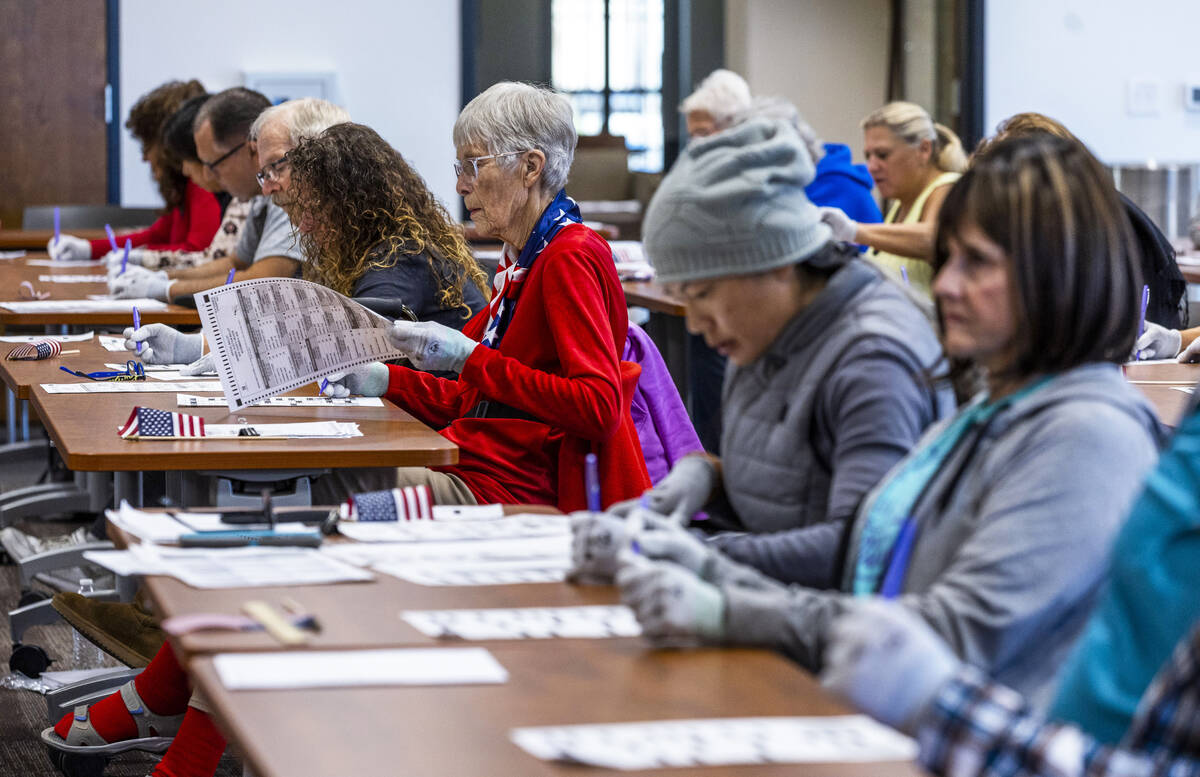 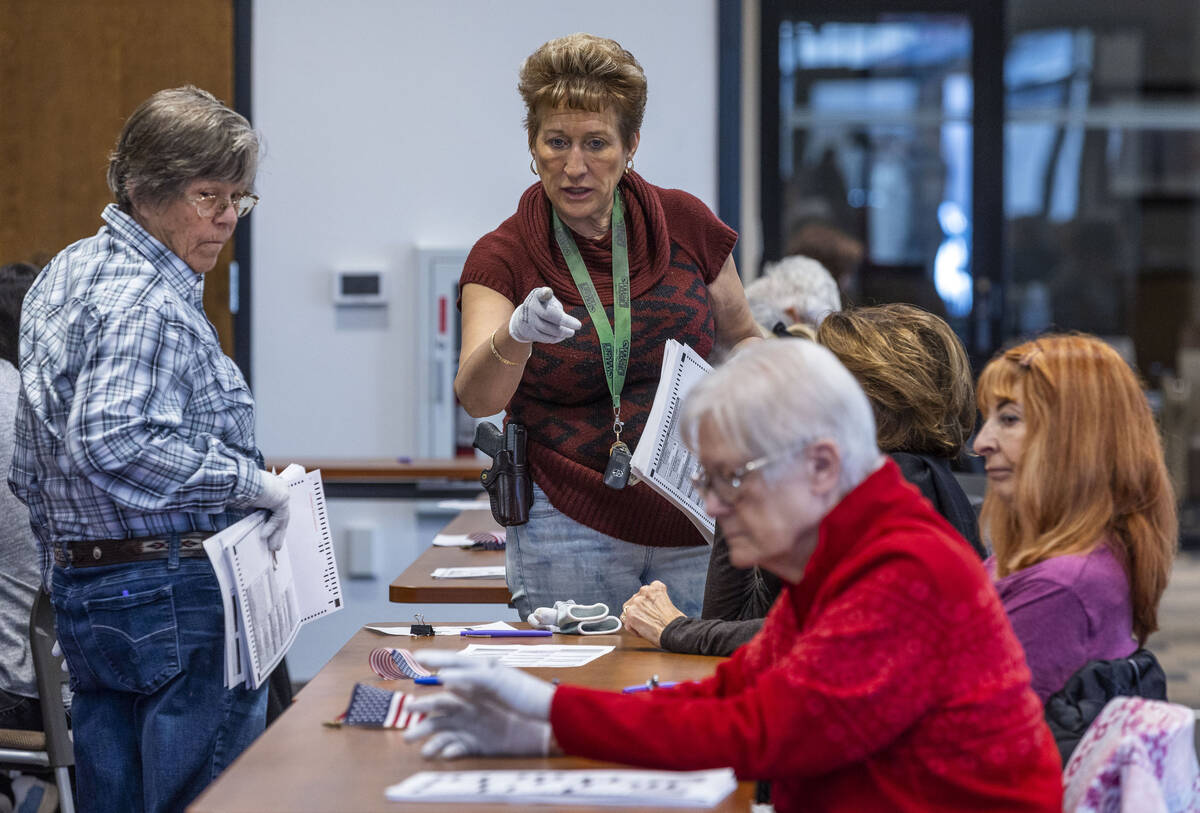 Another clarification is made as volunteers resume hand counting ballots in Nye County at the Valley Conference Center on Thursday, Nov. 10, 2022, in Pahrump. (L.E. Baskow/Las Vegas Review-Journal) @Left_Eye_Image 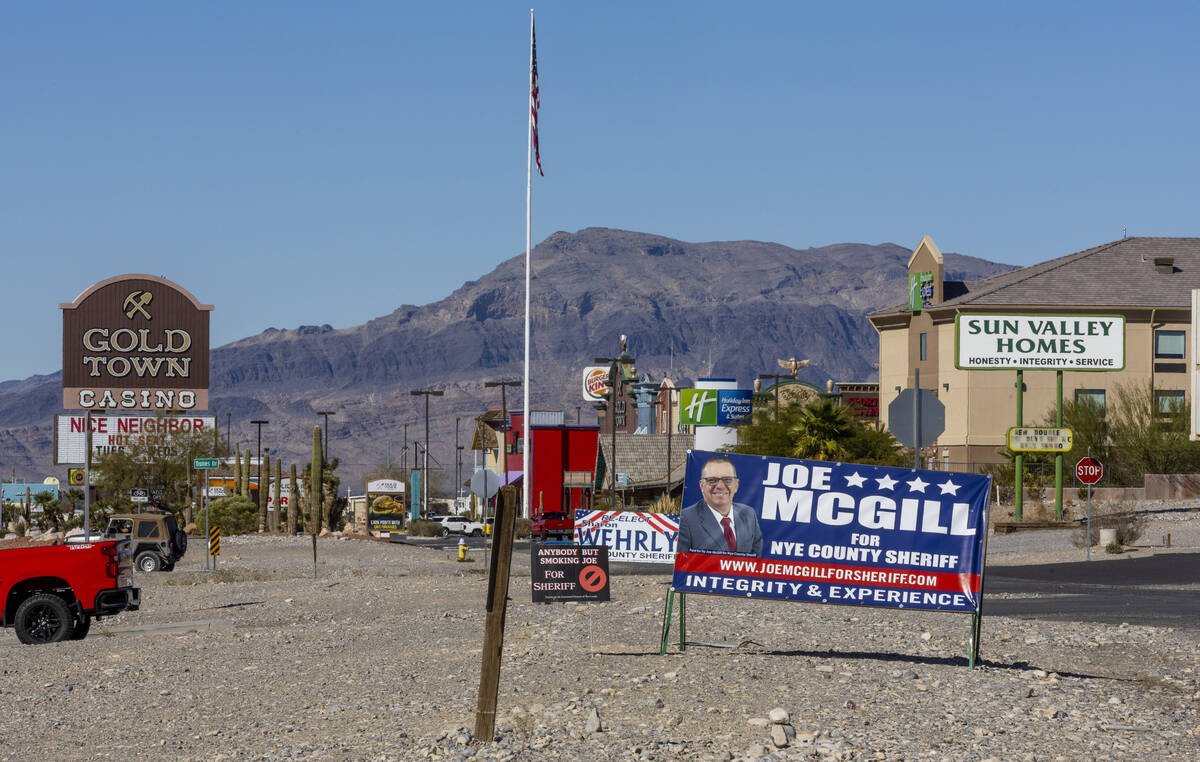 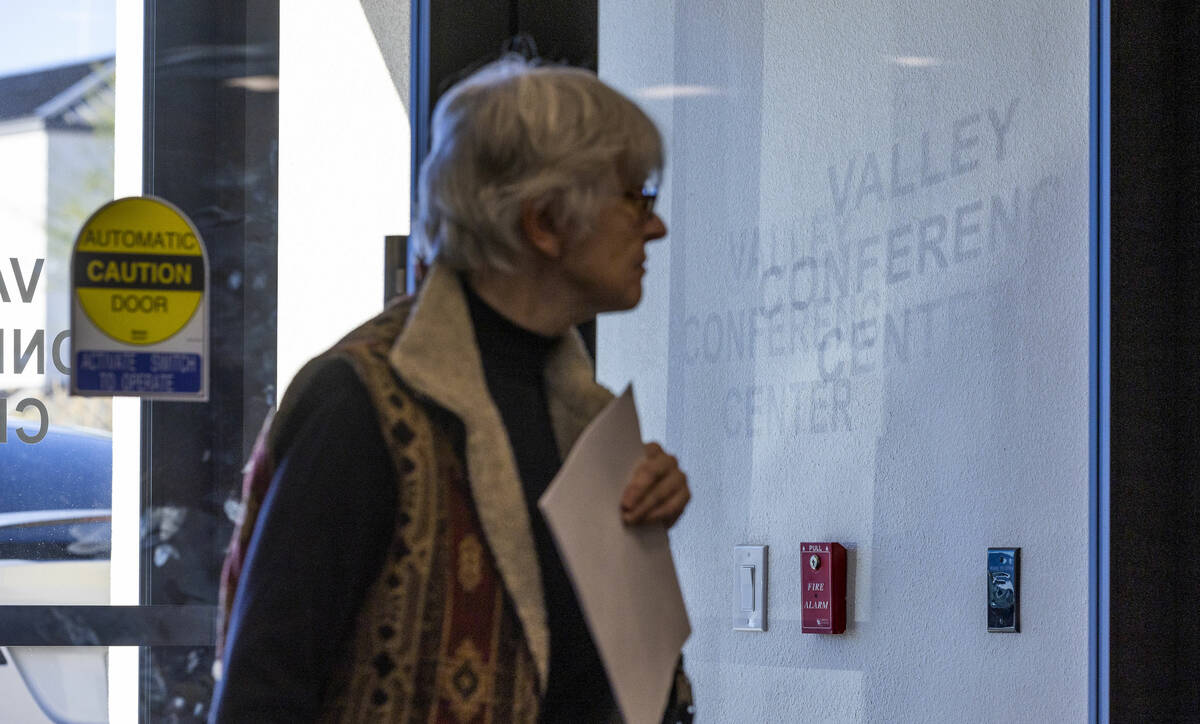 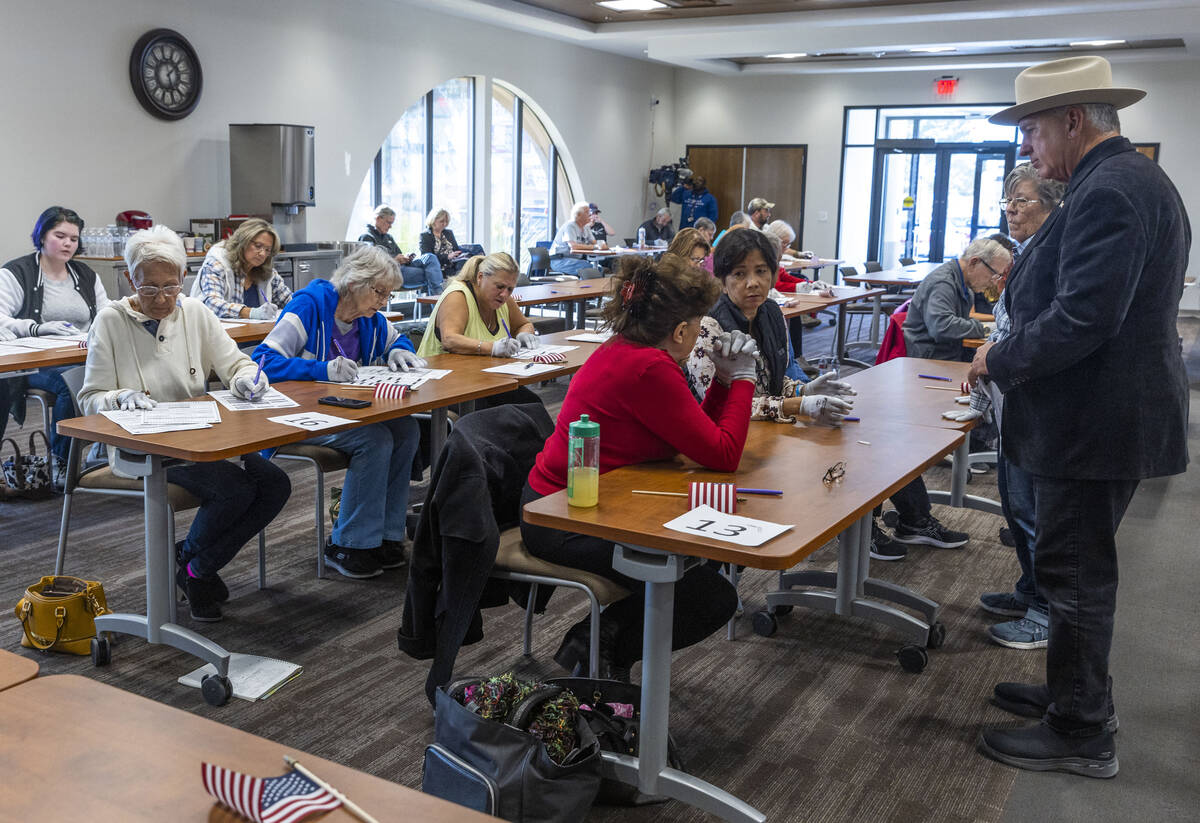 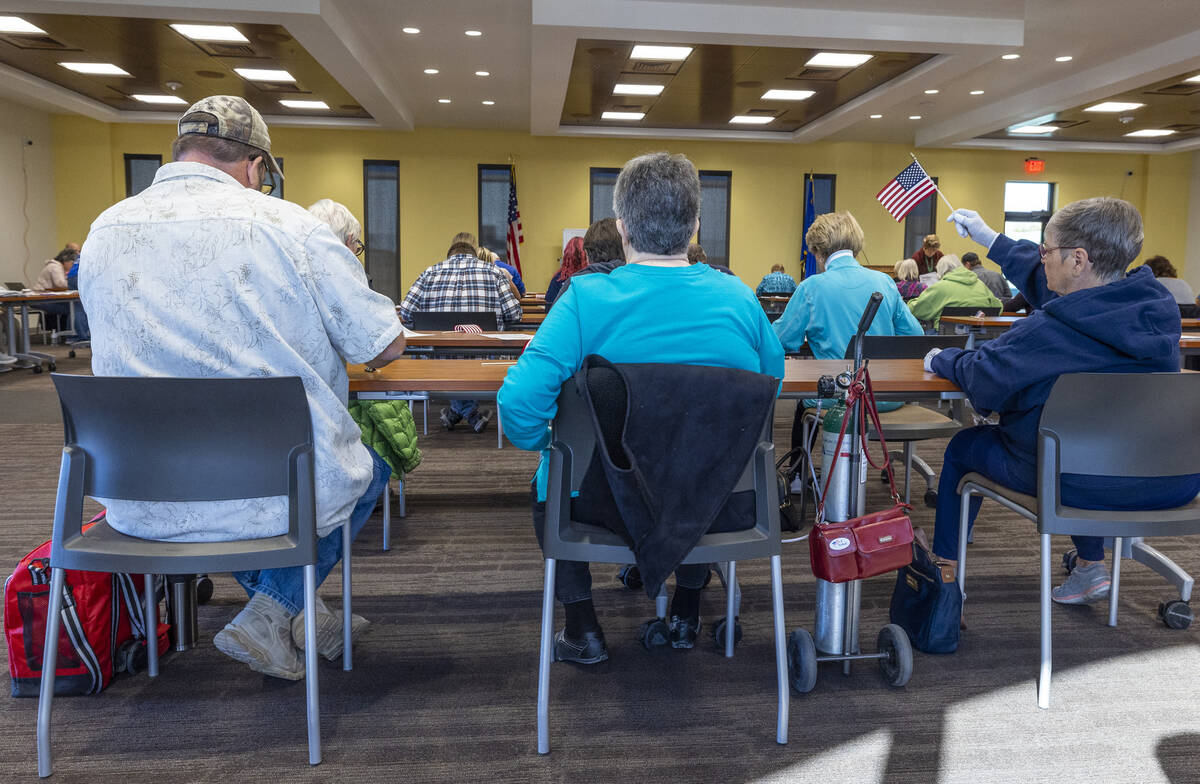 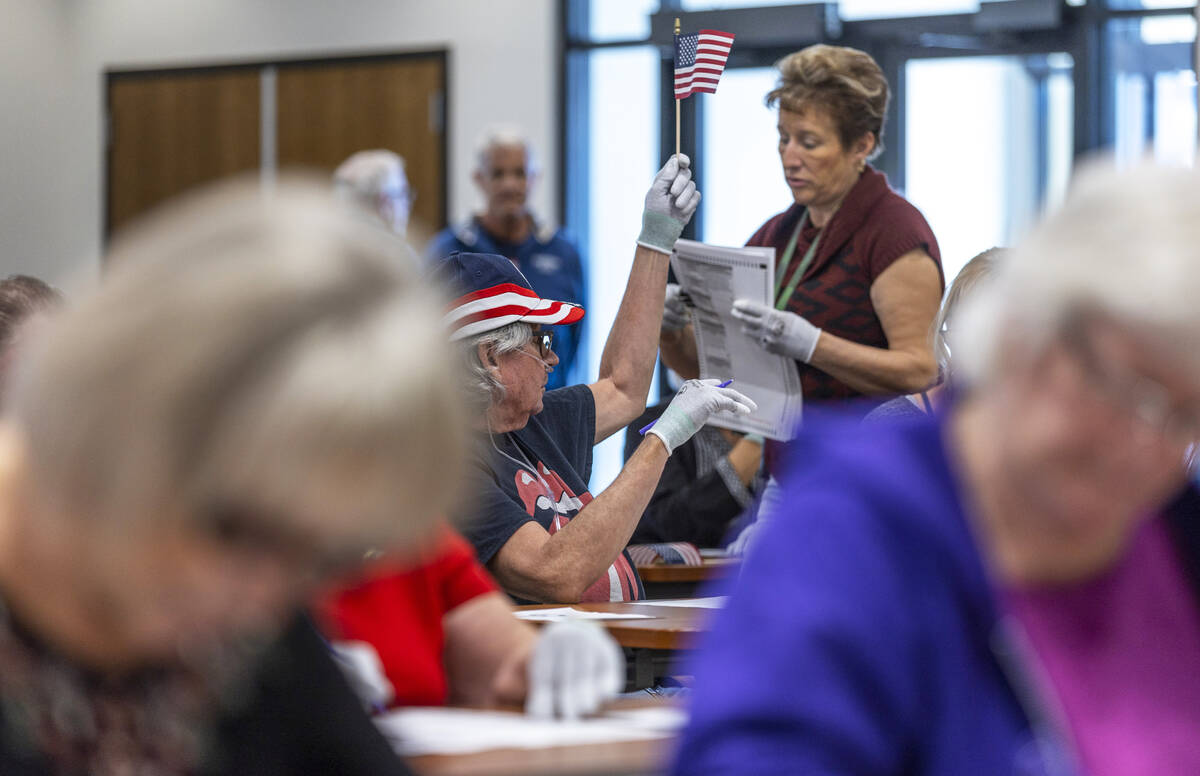 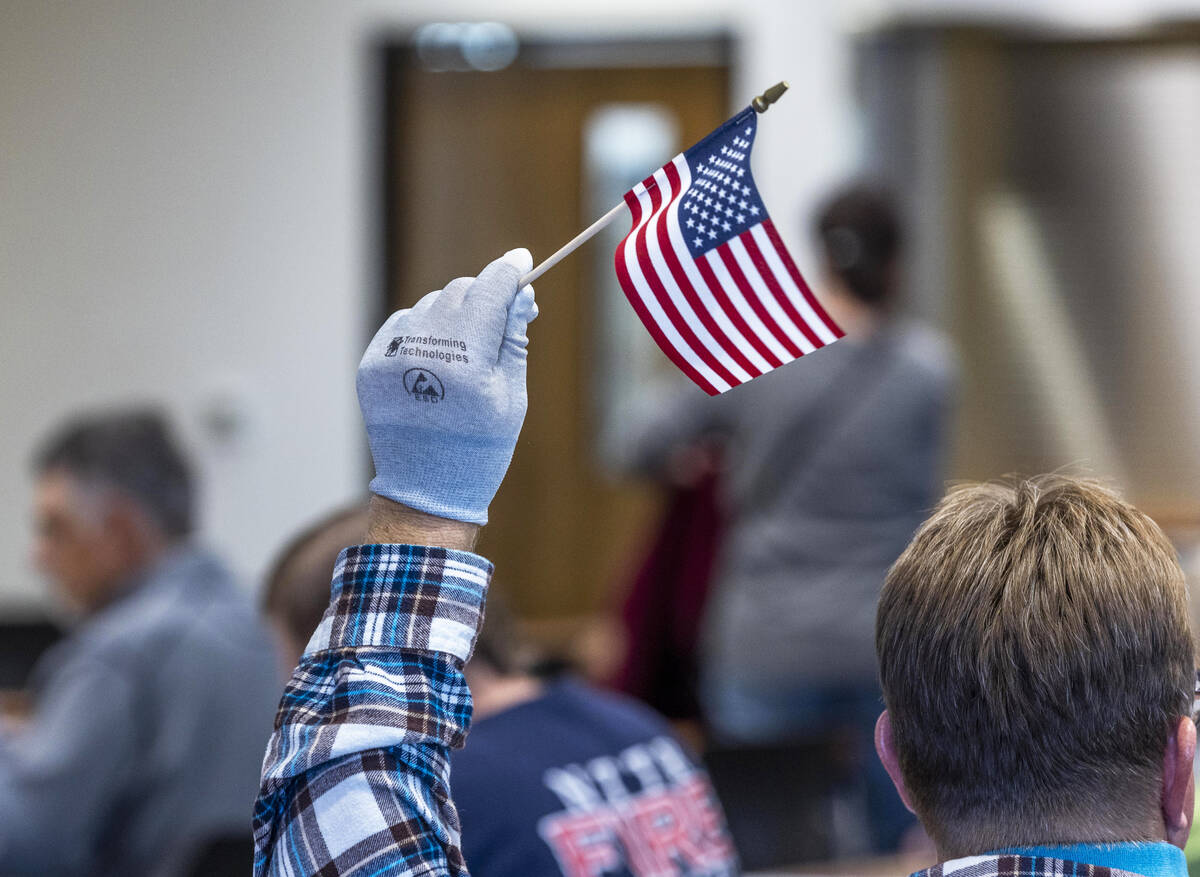 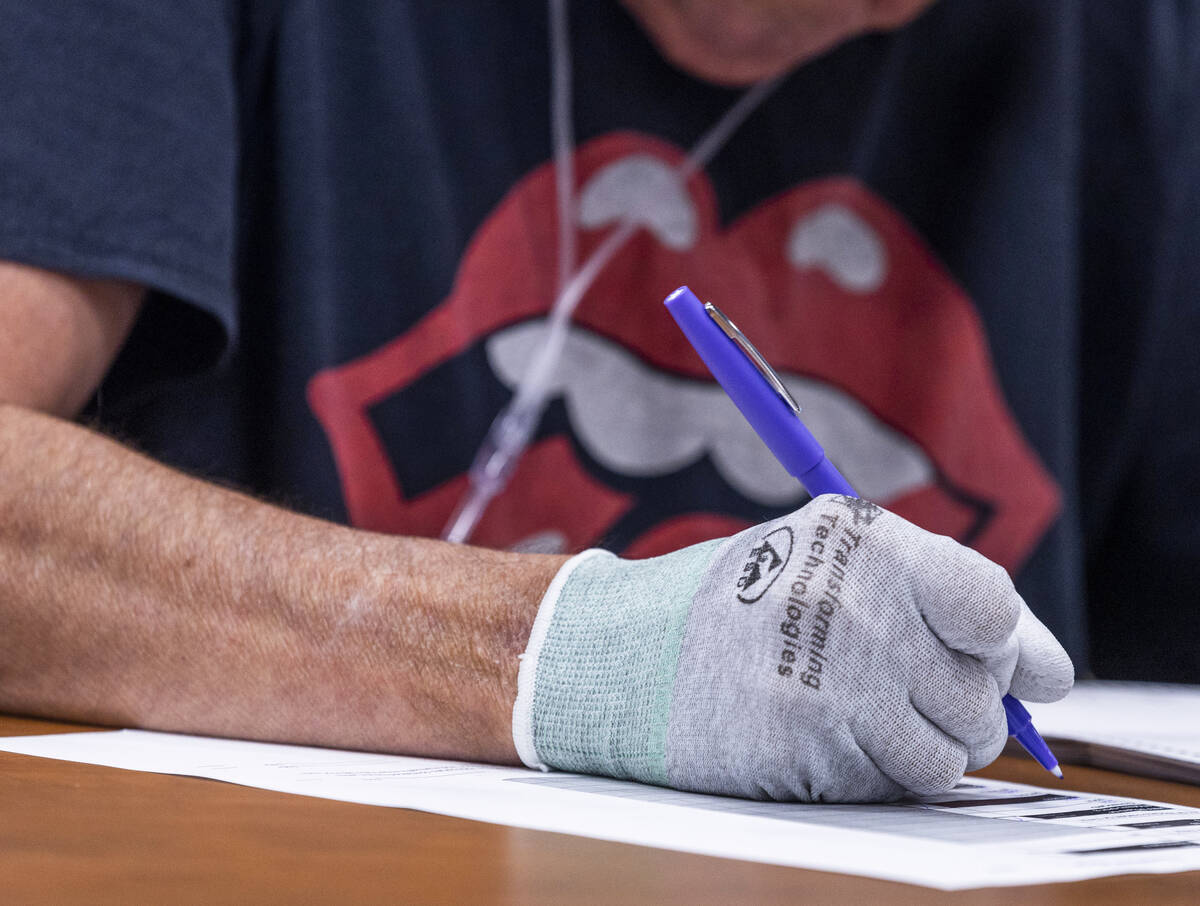 A volunteer wears Transforming Technologies gloves to shield from graphite markings on ballots, a safety measure as they resume hand counting ballots in Nye County at the Valley Conference Center on Thursday, Nov. 10, 2022, in Pahrump. (L.E. Baskow/Las Vegas Review-Journal) @Left_Eye_Image 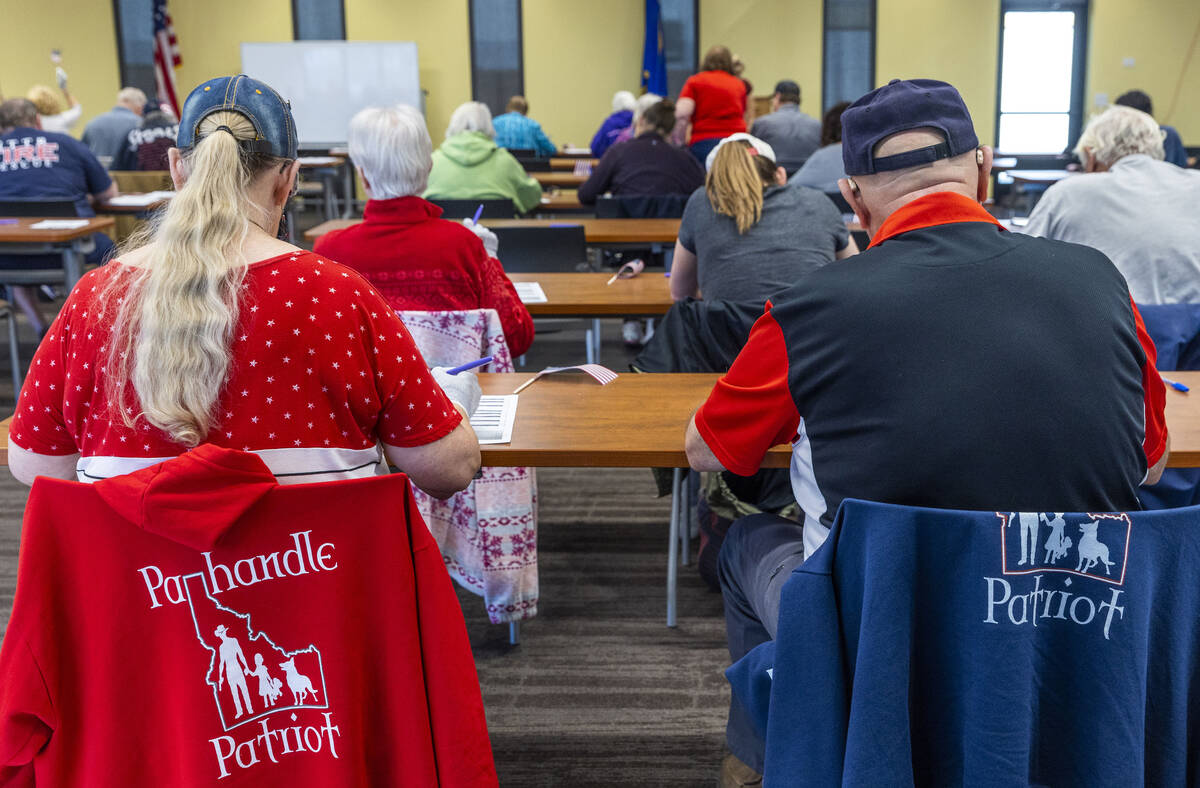 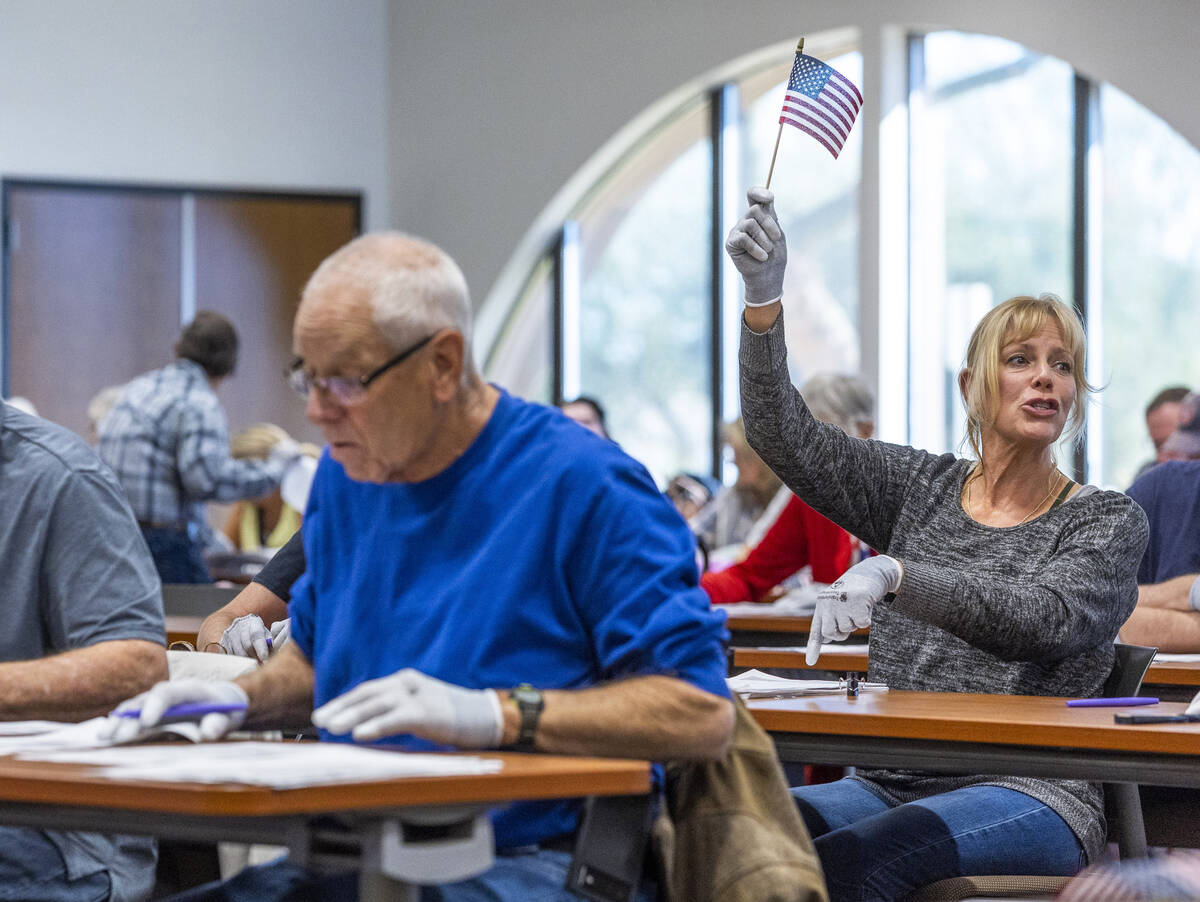 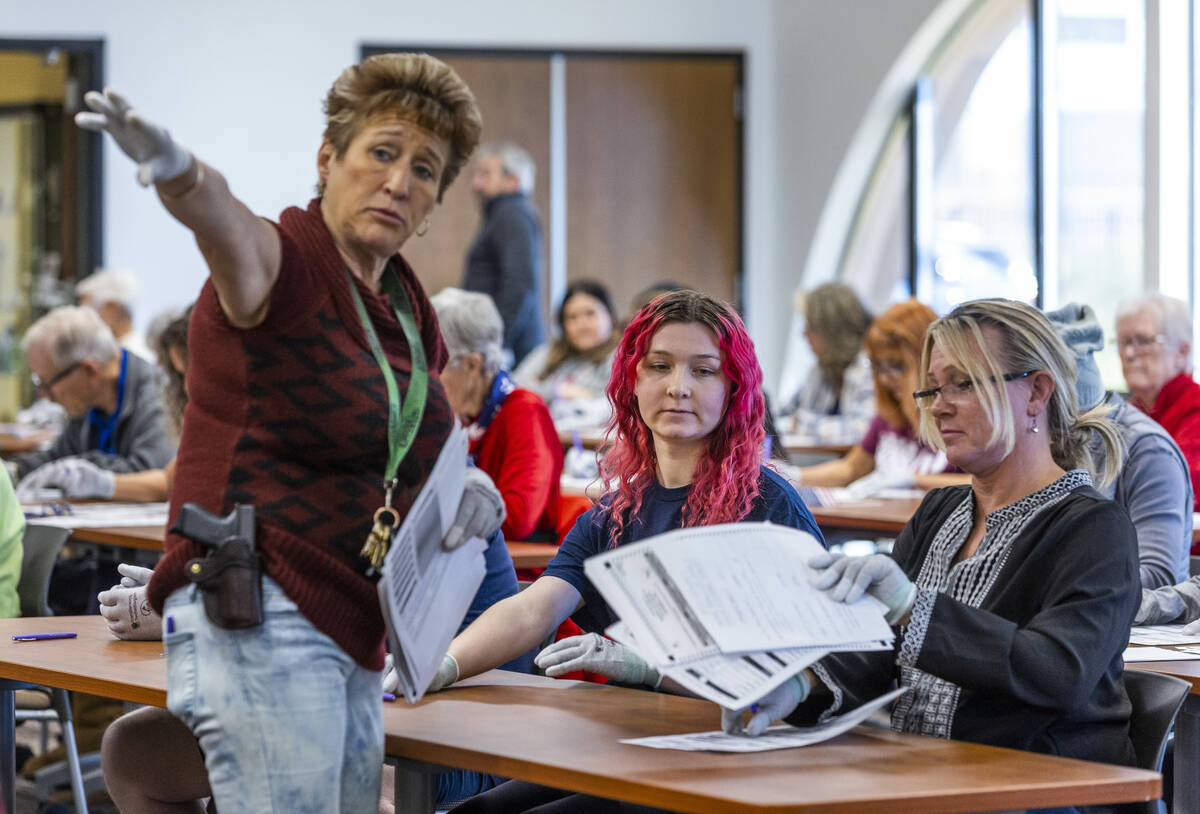 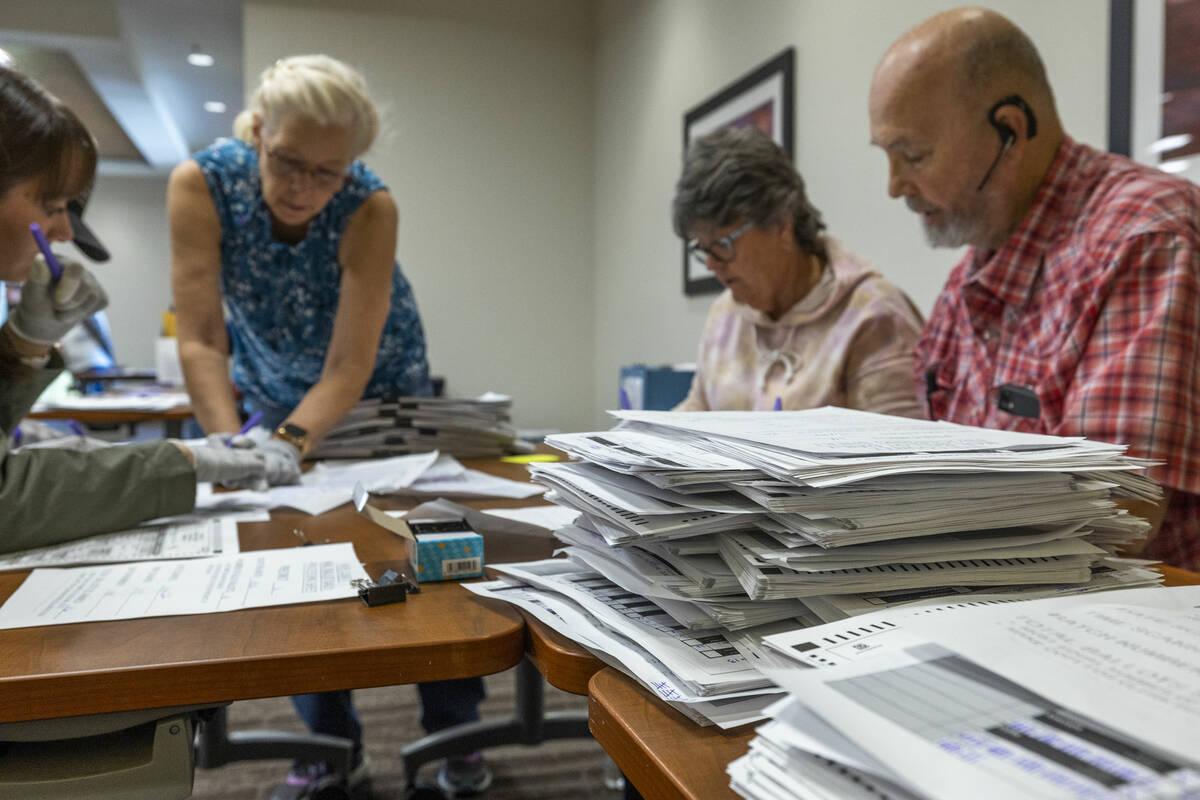 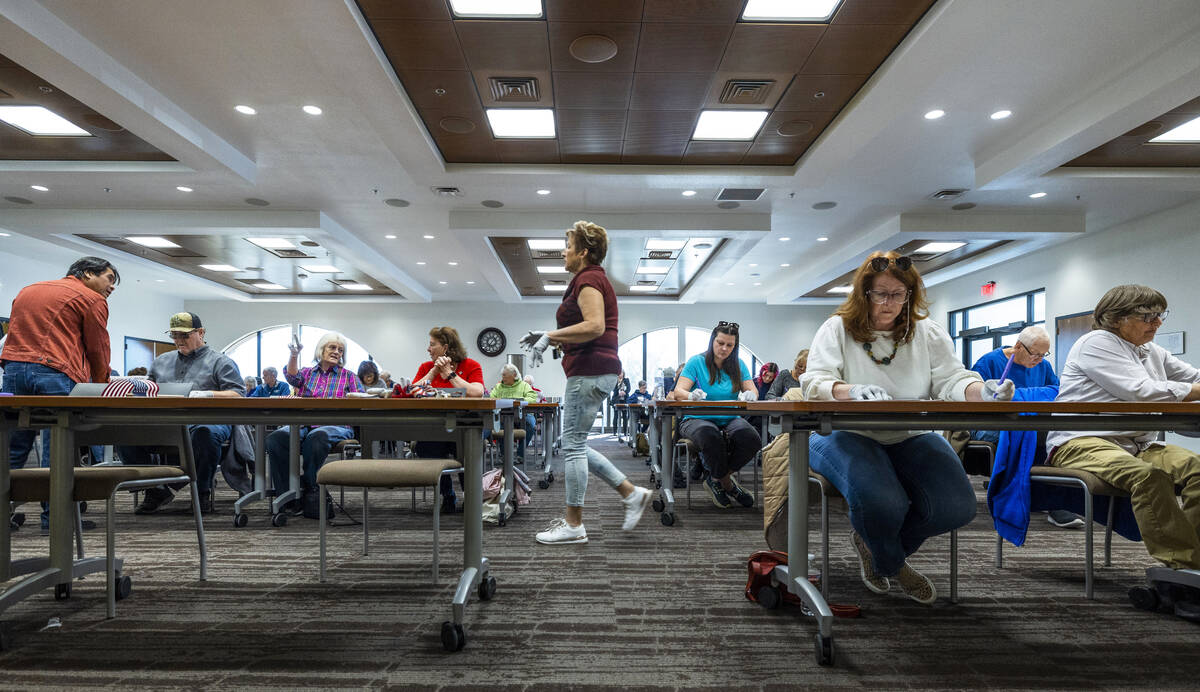 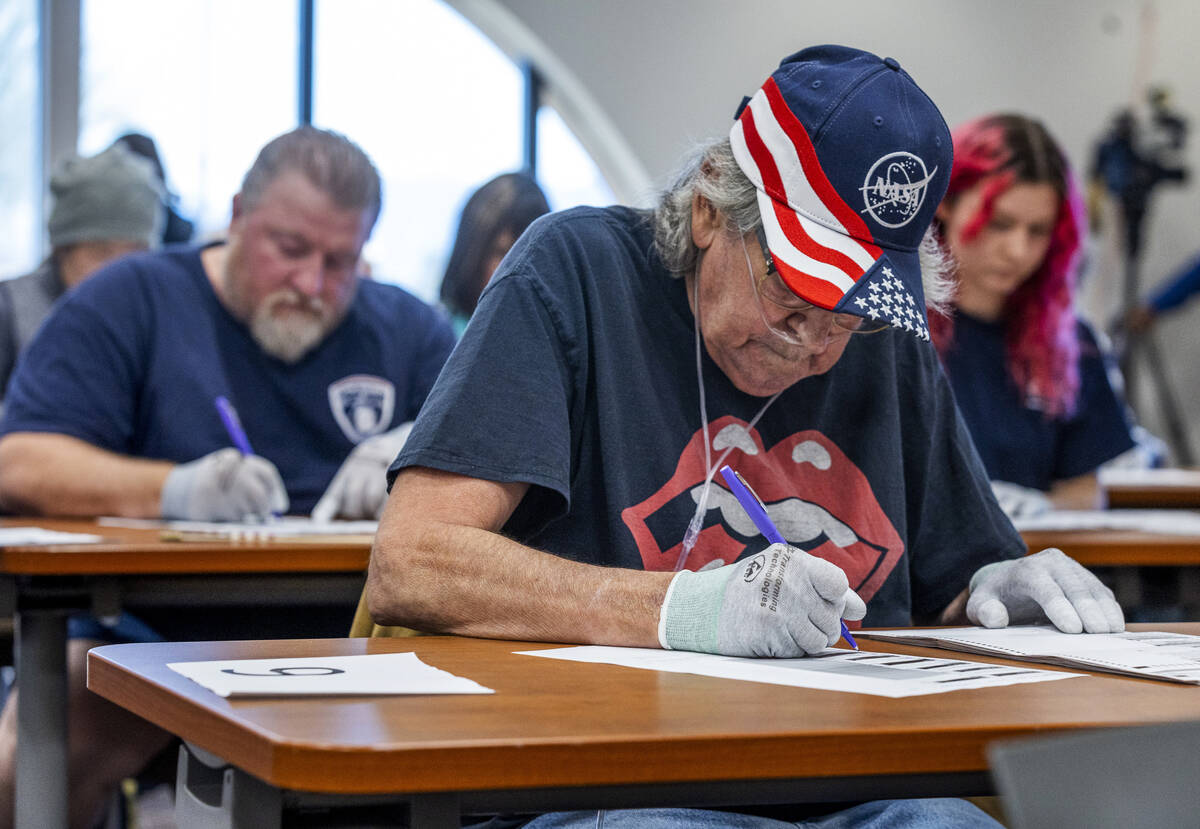 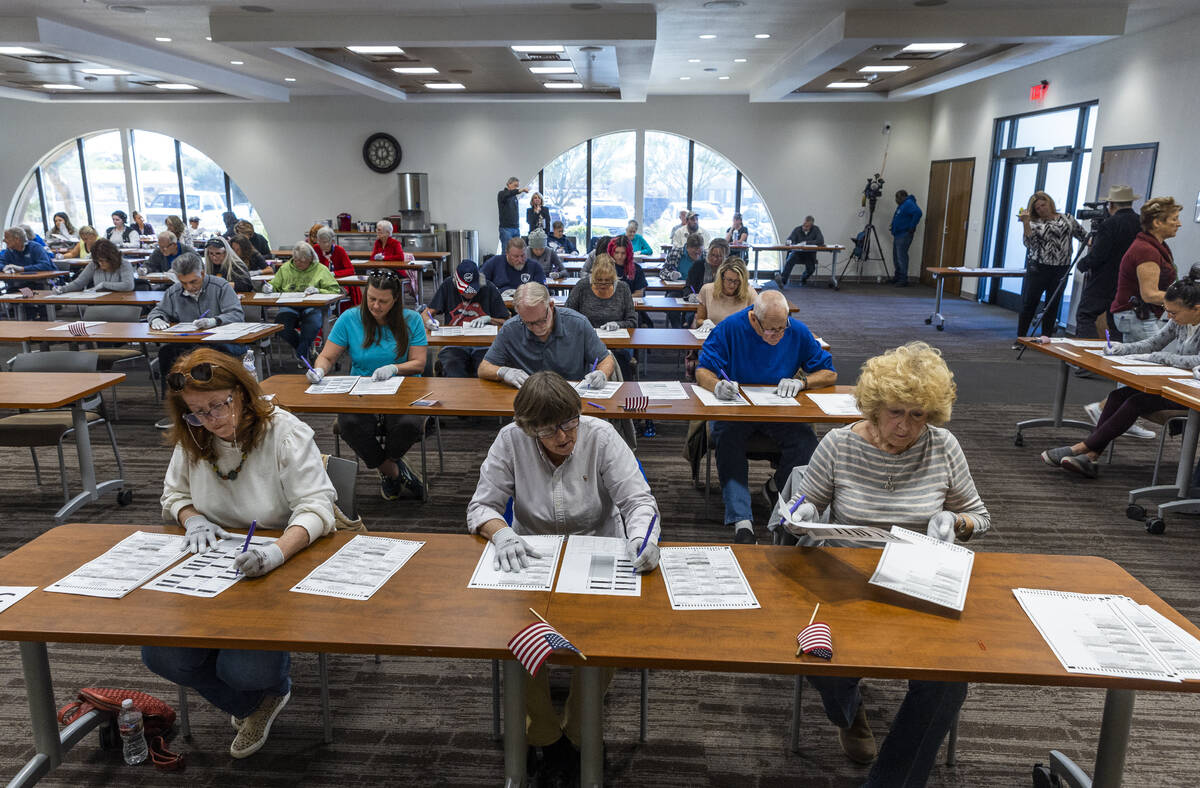 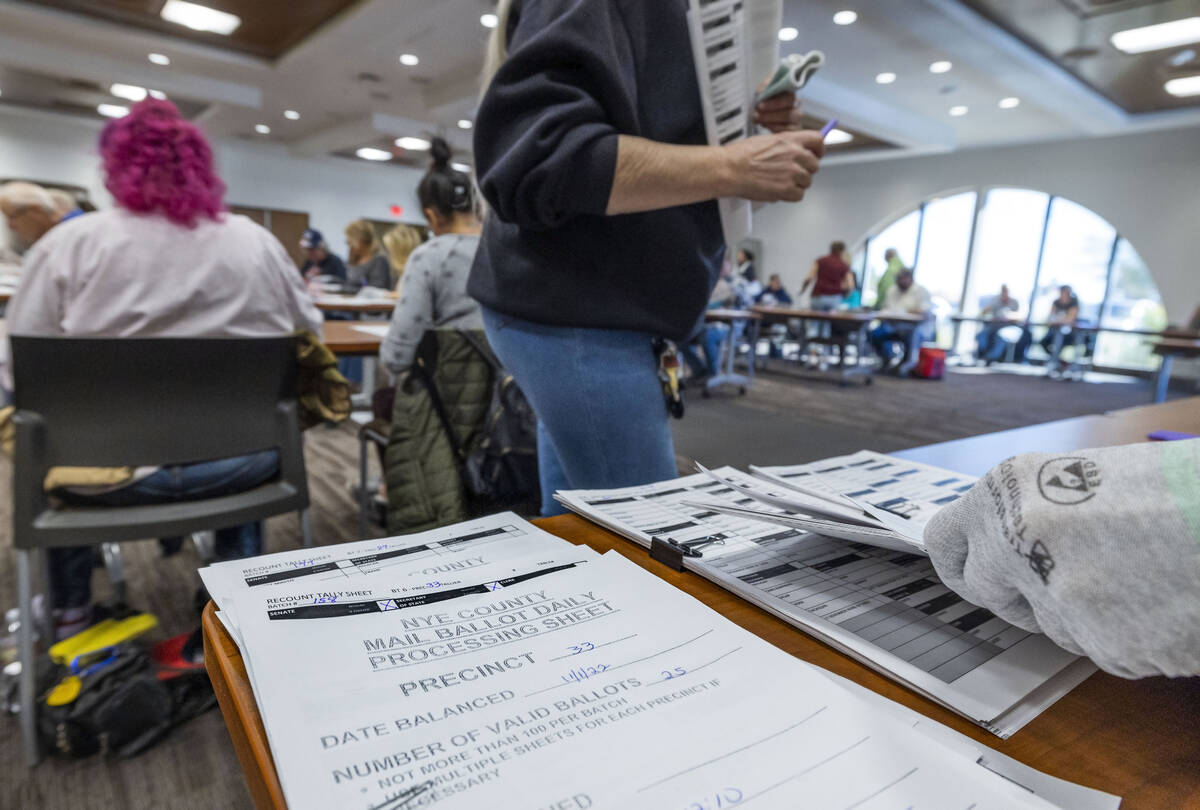 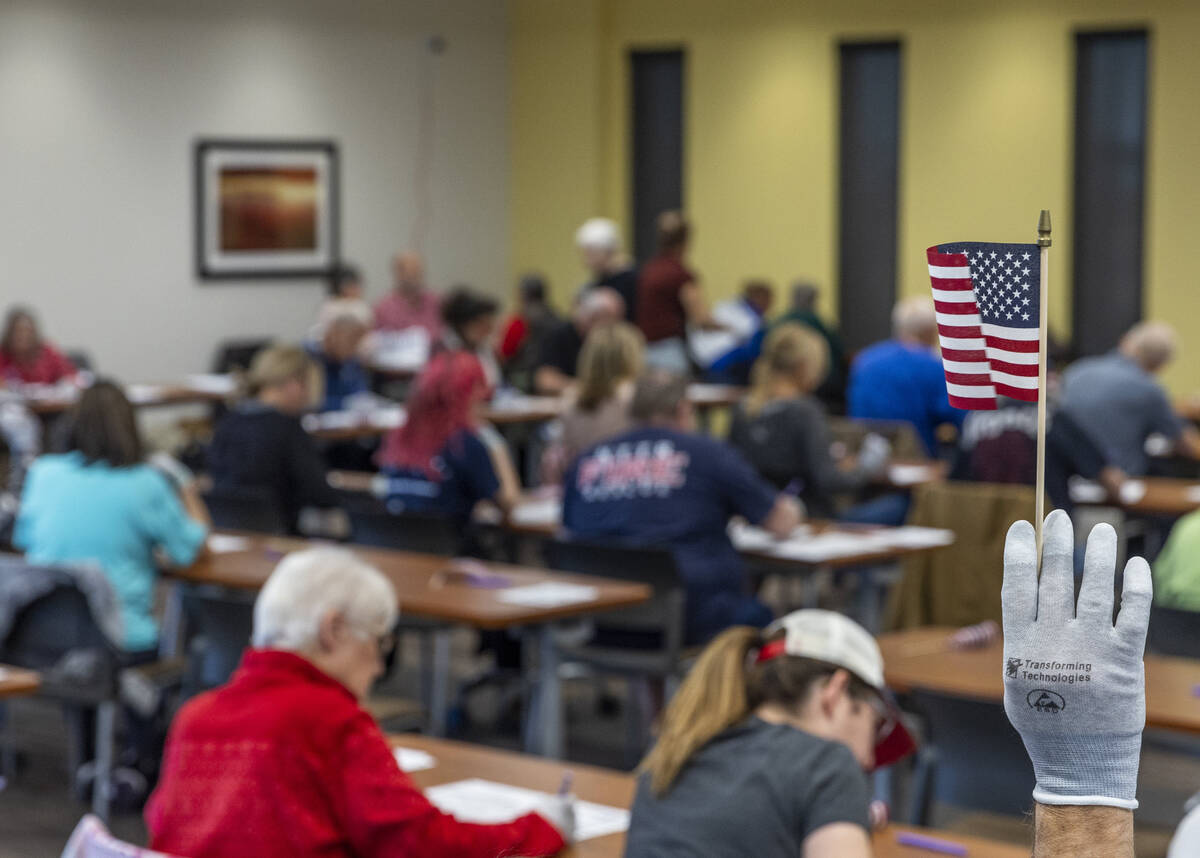 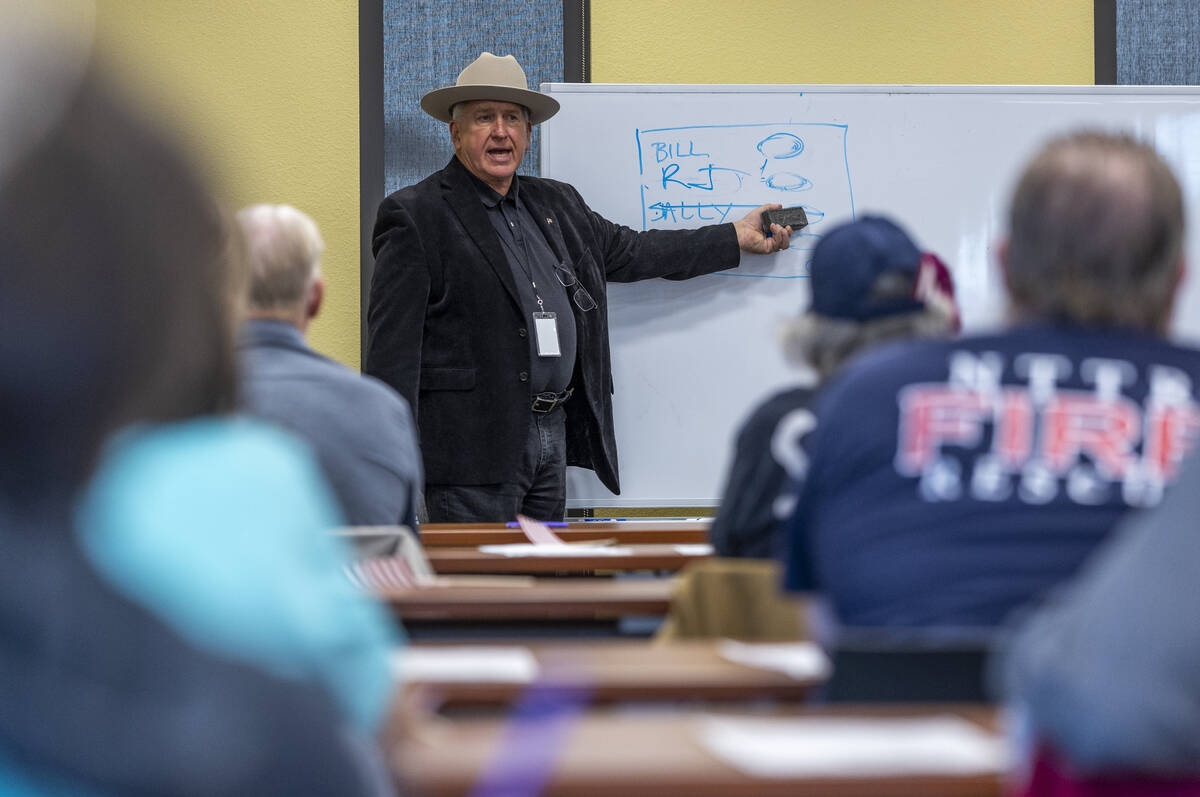 PAHRUMP — Sitting at tables in groups of three, 54 volunteers at the Nye County’s Valley Conference Center marked the results of paper ballots on a tally sheet with felt-tip pens — which make it clear if a volunteer tries to tamper with a ballot — before passing them to the next person to double-check the results.

The volunteers wear gloves to prevent anyone from using graphite under their fingernails to change the results on the ballots, and once they go through each race another volunteer makes sure all three reviewers counted the same number of votes.

Nye County, which received national news attention for its plan to hand count ballots, restarted that process Thursday as an “experiment” and “test for process,” Clerk Mark Kampf told the Review-Journal.

The Nye County Commission voted in March to have an all-paper ballot, hand count system in the election, but it was a long process to work out with the Nevada secretary of state’s office as well as voting rights organizations that challenged the plans. After getting the OK to hand count once the polls closed, the county asked for volunteers to be a part of the process.

“At least I’m giving it a try to see if it works, you know?” Kampf said. “And I’m a realist. I’m learning from the process. And if it works, great; if it doesn’t work, then we learned our lesson.”

Electronic tabulating machines made by Dominion are determining the county’s official election results, the ones sent to the secretary of state’s office. But Kampf said the hand counting process will act as an audit and a double-check of those counts.

Kampf, a Republican with experience in forensic auditing, is an outspoken election denier who has repeated the false claim that Donald Trump won the 2020 presidential election. He was appointed to the job in August after the previous clerk, Sam Merlino, retired after disagreeing with the commission’s decision to switch to hand counting paper ballots. (Kampf won the June primary election for the job and is running well ahead in the general election for the post.)

Kampf hopes the process will instill greater confidence in the election process for Nye County residents.

Thursday was the first of eight days the county has to hand count ballots, with a goal of counting 2,700 to 3,000 ballots per day. By about 2:30 p.m., the team had counted 3,000 ballots but had to do many recounts, about 500 per hour, Kampf said. Kampf had to dismiss a few volunteers, such as some who were older and had difficulty counting, but he thinks after the first day the process will go more smoothly.

If the hand counts do not match the Dominion machines’ totals, the batches of ballots for each race will be isolated and recounted. If there is still a difference in totals, the physical ballot will be compared to the image stored in the Dominion server to ensure there were no modifications to the ballot.

“I suspect the majority of the differences, if there are any, are going to be as a result of adjudication decisions,” meaning mistakes that voters make on a ballot, Kampf said.

“The voter intent has to be very clear. And if it’s not clear, then a decision has to be made,” Kampf said. “But there’s only one way to correct things and that’s what we’re following, is the secretary of state’s guidelines and how to correct it.”

If the volunteers are unsure about what a voter intended, they raise a tiny American flag for help and Kampf will come over to assist.

In the official counting done with electronic tabulators, an election board official makes decisions with the adjudication process, Kampf said.

“We have followed a very strict process of controlling our ballots and controlling the recent release of those ballots at the polls and been able to balance every day to the number of people who checked in to vote, the number of ballots that went into that ballot box and I’m very comfortable with the tabulation process because we’ve been doing it for over two years now. The process is a tried-and-true method,” Kampf said.

While there are more Republicans volunteering in the recount process, Kampf did reach out to Democratic organizations who also sent volunteers, and he said people have come from all over the state to help.

Kampf began the process before Election Day, when state law allows counties to begin counting ballots. But because people tallying the ballots announced the results out loud, the county ran afoul of another state law that prohibits disclosure of results before all voters have cast ballots, and was ordered by the secretary of state to stop.

Before that happened, the makeup of counting volunteers was about 20 percent Democrat, 10 percent independent and the rest Republican.

“This is truly a community effort, and that doesn’t happen that much in this world anymore,” Kampf said. “And this is such a great example and as clerk, even though I ran as a Republican, I see my role as having to be totally impartial and independent in everything I do.”