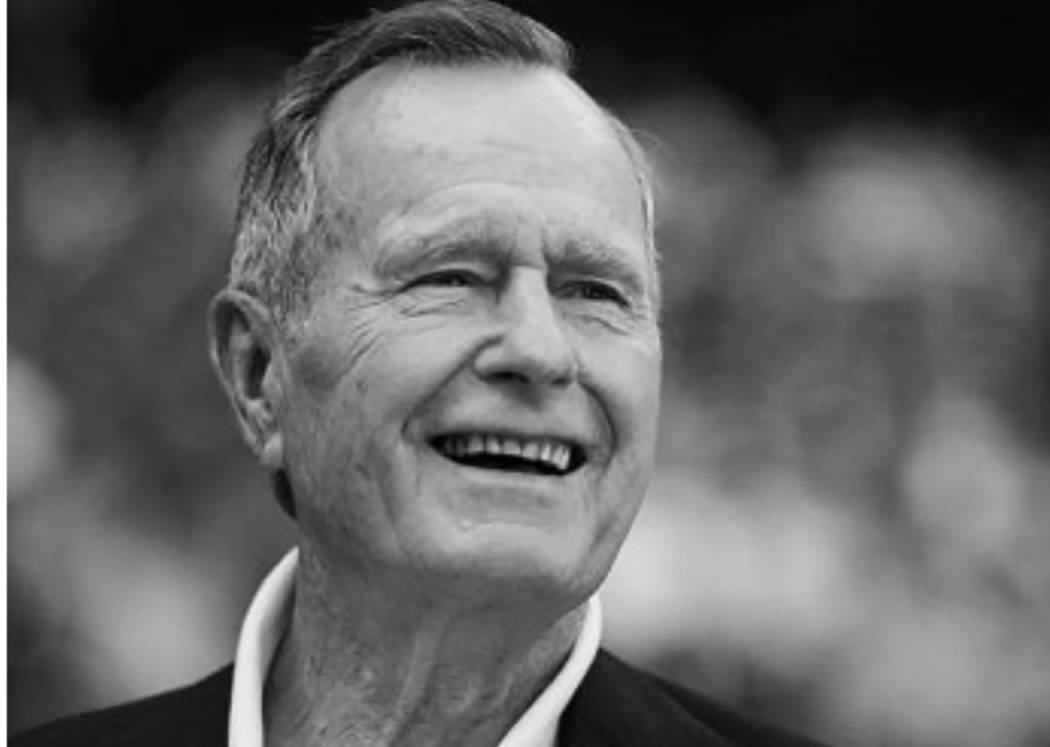 Photo from Texas A&M University George H.W. Bush, who presided over the fall of the Soviet Union and the liberation of Kuwait in the Gulf War, died in November at the age of 94.

President George H. W. Bush was the last of his kind—-“the last gentleman” in the words of his biographer, Jon Meacham. He was our last president to have been born before World War II and to have nobly served in it. He was the last “moderate” Republican president, a brand in decline before he took office and virtually disappeared since.

President Bush 41 was by temperament a man of the middle in an era of increasing ideological polarization. He was a man of admirable private and public character who believed in government service for the good of the country and not merely for power. He exhibited “selfless patriotism” in both international and domestic politics.

Like all Republican presidents, Bush 41 is remembered more fondly by media and liberal elites in retrospect than he was at the time. Opponents never forgave him for the sharp-elbowed general election campaign waged against Democratic nominee Michael Dukakis in 1988. Bush won a whopping 426-111 electoral vote victory.

Bush grew up in an era when compromise was more common and members of both parties dared to socialize together. He underestimated the partisanship of congressional Democrats, particularly Senate Majority Leader George Mitchell, whose goal was to make Bush a one-term president. Democrats were in firm control of both houses of Congress, including 56-44 Senate and 270-164 House majorities in the 102nd Congress.

This partisanship manifest itself immediately with Senate Democrats (53-47) refusing to confirm Bush’s choice for Defense Secretary, former Texas Senator John Tower. That was the first time the Senate rejected a cabinet nominee of a newly elected president. The hugely contentious confirmation struggle over Clarence Thomas’ nomination to the Supreme Court followed in September 1991. Thomas was confirmed narrowly, 52-48.

In 1991, despite opposition from Democratic congressional leaders, Bush won authority (52-47 in the Senate) for the use of force to expel Iraqi invading military forces from Kuwait. Bush skillfully assembled a broad coalition, with 35 countries contributing military personnel. This led to an overwhelming rout and set a standard for the post-Cold War order.

George H.W. Bush arguably gave America its most consequential one-term presidency. Bush’s historic contribution was to use personal diplomacy to navigate the demise of the Warsaw Pact, the reunification of Germany and the breakup of the Soviet Union. His cautious temperament and long experience helped to negotiate a transition without a shot fired. Few empires in history have fallen in such peaceful fashion.

His foreign policy successes should not obscure his achievements in the domestic arena. He continued the deregulation of the economy begun under President Reagan, initiated the North American Free Trade process, and cleaned up the savings and loan crisis. In 1990, Bush supported both the Americans with Disabilities Act, giving millions of people the chance to achieve economic independence, and Clean Air Act Amendments, reducing sulfur dioxide emissions.

Bush’s greatest political failure was to break his 1988 campaign pledge: “Read my lips, no new taxes.” He accepted a tax increase before Democrats had agreed to entitlement reform or spending cuts. The final deal included fleeting spending cuts while breaking his tax pledge. His approval rating, 89 percent in February 1991 after the Gulf War, plummeted to 35 percent in March, 1992, and cost him re-election.

In his only inaugural address, the new president said: “America is never wholly herself unless she is engaged in high moral principle. We as a people have such a purpose today. It is to make kinder the face of the nation and gentler the face of the world.” In his understated way, George H.W. Bush furthered that purpose.