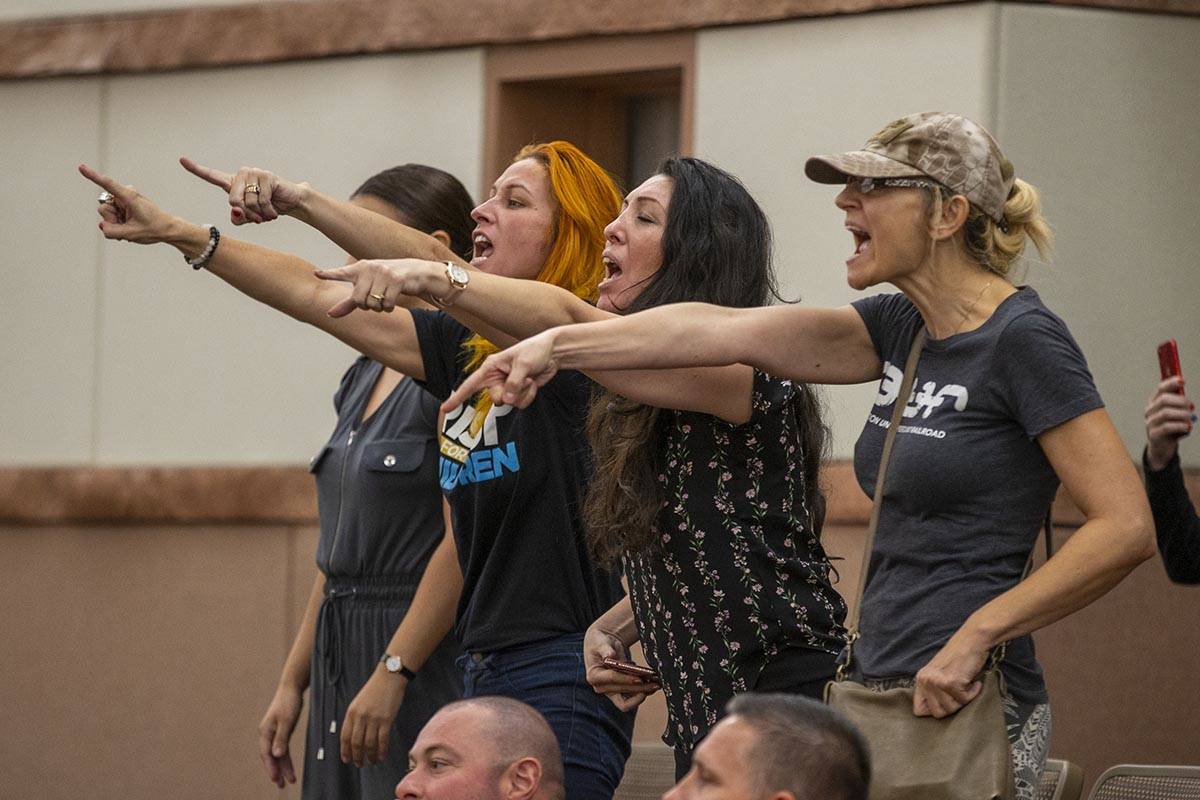 Members of the public express their discontentment as officers escort Katrin Ivanoff from the Clark County Commission meeting for public outbursts as members discuss the increasing positivity rates of COVID-19 in Clark County and the recent recommendations from the Southern Nevada Health District on Tuesday, July 20, 2021, in Las Vegas. (L.E. Baskow/Las Vegas Review-Journal) @Left_Eye_Images 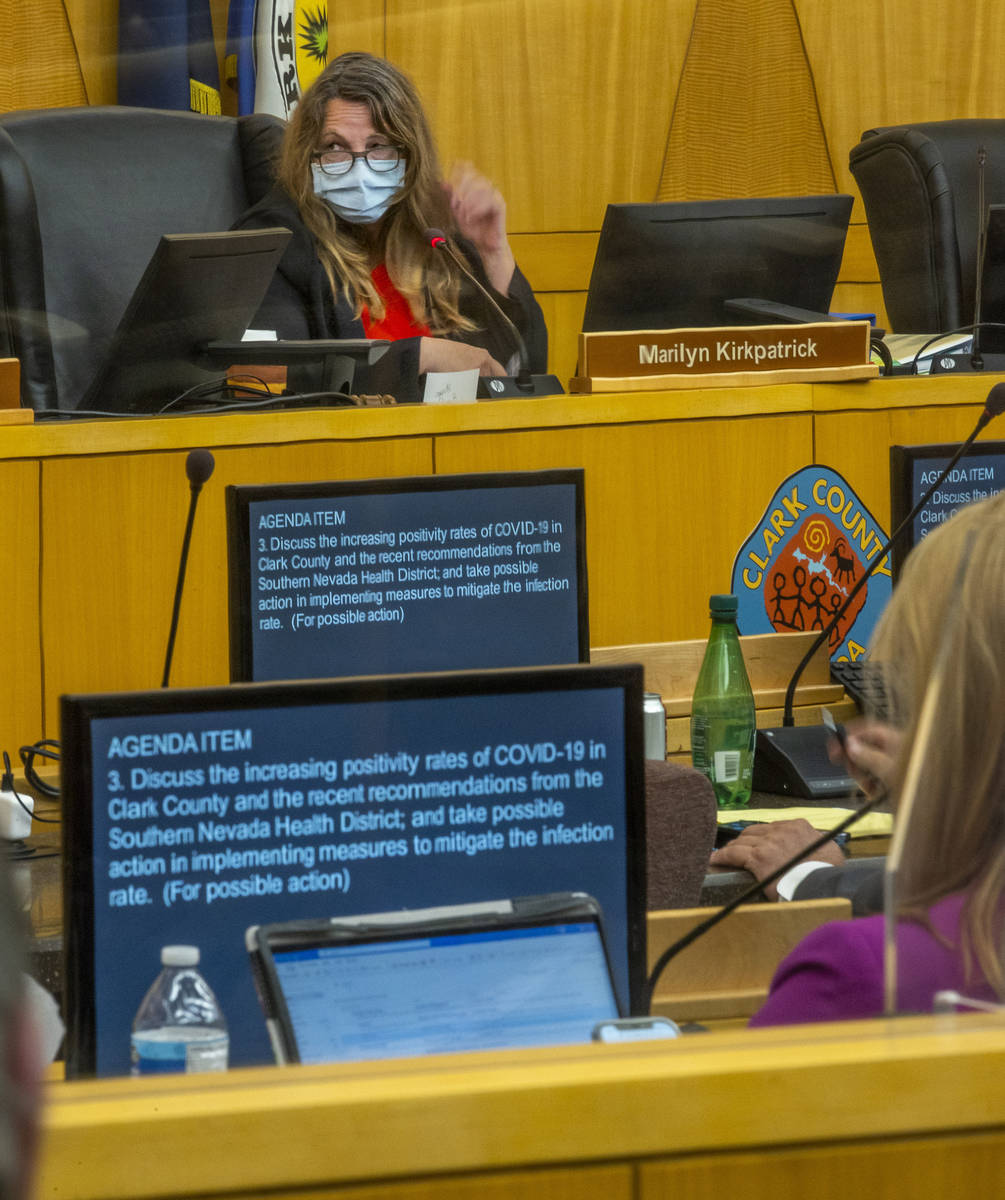 Two hundred and forty five years ago, Thomas Jefferson wrote about a “long Train of Abuses and Usurpations” visited upon the American colonies.

Against such tyranny, Jefferson and his fellows pledged their lives, fortunes and sacred honor.

On Tuesday, a long train of Karens petitioned the Clark County Commission for relief from the abuses of … having to wear a face mask to slow the spread of coronavirus.

From conspiracy theories about the vaccine to assertions that masks do nothing to prevent the spread of disease, the misinformation, junk science and leaps in logic continued for more than an hour.

Failed congressional candidate Jim Blockey boldly said out loud into a microphone in front of many people that, “I never got (the coronavirus) and I never wore a mask.”

Others said they’d not comply with mask mandates or suggested masks were harmful to people’s health. That’s why surgeons never wear masks when operating. Oh, wait.

Many demanded the county not implement mandates because elected officials must obey the public. But those who showed up on Tuesday were not representative of the entire populace (for which we should give thanks to God), and the Constitution guarantees due process, not preferred results.

Some quoted the Founding Fathers, who didn’t know about viruses or their role in causing disease. Others declared it their God-given right to refuse to wear masks or get vaccinated.

If COVID-19 affected only the vaccine- and mask-hesitant, things would be different. Alas, the rain falls on the just and unjust alike. Also, if we’re to invoke the divine, did Jesus not say something about loving your neighbor as yourself?

It’s tempting to think that we’ve reached a new low point, but the conspiratorial style on display Tuesday we have always had with us.

Consider Richard Hofstadter’s words originally published in 1964: “The distinguishing thing about the paranoid style is not that its exponents see conspiracies or plots here and there in history, but that they regard a ‘vast’ or ‘gigantic’ conspiracy as the motive force in historical events. History is a conspiracy, set in motion by demonic forces of almost transcendent power, and what is felt to be needed to defeat it is not the usual methods of political give-and-take, but an all-out crusade.”

Of course, the commission is not a force of transcendent power, and an all-out crusade to not wear masks is hardly akin to the Revolution. Commissioners weren’t asking citizens to lay down their freedoms to a tyrannical, one-world government secretly run by the Bavarian Illuminati, which seeks to impose the Mark of the Beast in the form of an N95.

No, they’re just regular folk asking people to consider the health and well-being of their fellow residents, to say nothing of the impacts that a COVID surge may have on the Las Vegas economy. (The primary supporters of a mask rule were the Nevada Resort Association and the Vegas Chamber, both of which fear what a renewed virus could do to an economy still digging out from a year of closures.)

But for many who spoke on Tuesday, other people simply don’t count. For all the talk of rights, freedoms, the Constitution and conspiracies, there was precious little about compassion, shared sacrifice and the common good.

One more Hofstadter, for the road? “We are all sufferers from history, but the paranoid is a double-sufferer, since he is afflicted not only by the real world, with the rest of us, but by his fantasies as well.”