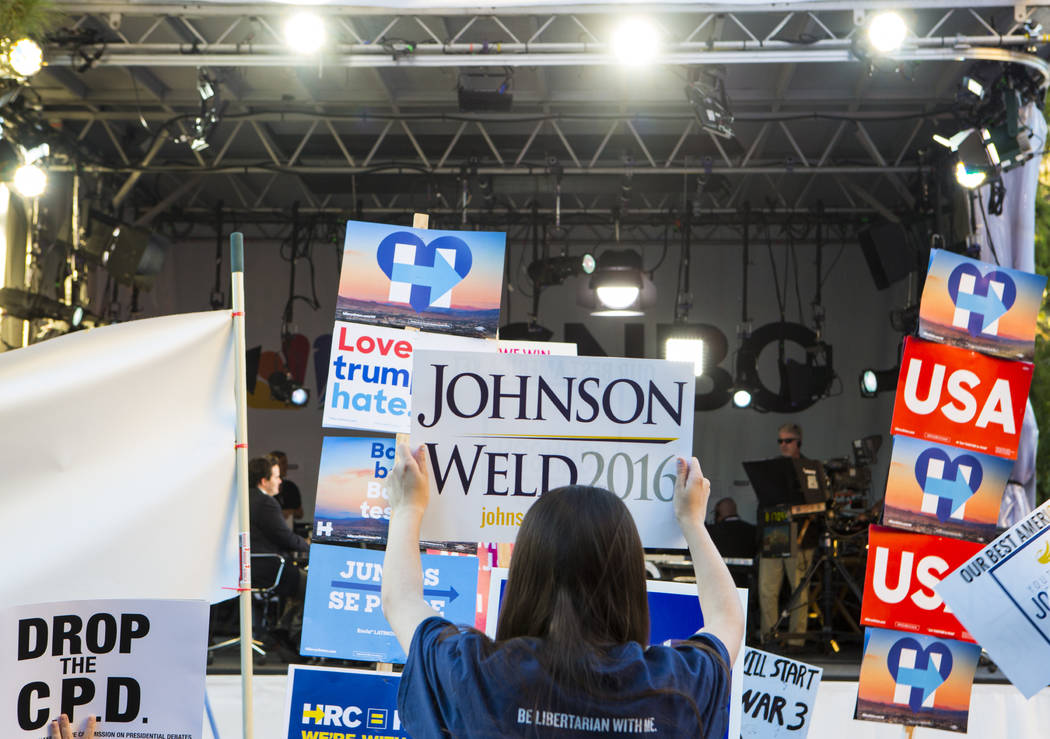 Miranda Alam/Las Vegas Review-Journal A supporter of 2016 Libertarian presidential candidate Gary Johnson holds up a sign in front of the MSNBC stage ahead of the third presidential debate at UNLV in Las Vegas, on Wednesday, Oct. 19, 2016.

It’s “a radical idea and one that was confined to the fringes just months ago,” but one that “left-wing insurgents can use to differentiate themselves from more established rivals in Democratic primaries.”

Good idea. So good, in fact, that I wrote a column advocating exactly that three months ago. Welcome to the right side, Democrats.

Like most Libertarians, I’m amused when our ideological opponents see a parade forming around one of our ideas and try to hustle their way to the front to “lead” it.

Unlike some Libertarians, I don’t follow up amusement with getting down in the mouth about being “co-opted.” I’m just happy to see good ideas gain steam from any source.

The Libertarian Party has supported same-sex marriage rights since its founding in 1971. Hillary Clinton finally joined us on that one in 2013. Better late than never.

It’s not just the Democrats we’re a leading indicator for. We began calling for elimination of the federal income tax decades before the (even worse) “Fair Tax” idea embedded itself in the Republican Party as an alternative (unfortunately that terrible proposal — a 30 percent national sales tax coupled with a monthly cradle-to-grave welfare check for every man, woman, and child in America — has fooled some Libertarians as well).

Marijuana legalization? That was us too, fighting both old party establishments to get medical, then recreational, cannabis off the list of victimless “crimes” from the early 1970s on. Glad we’re getting there.

We’re not always quite so far ahead of the older parties. We beat the Democrats to putting abolition of the death penalty in our platform by mere weeks in 2016. It should have been there since 1971.

The perceived gold standard for a political party’s success is winning elections, and I wish that Libertarians won more of them. But a better standard is successfully pushing our values, our ideas, and our proposals into the public conversation and seeing them adopted. I’d like to see that happen more often as well, but I’m glad when it happens at least occasionally.

Unlike the old parties, the Libertarian Party holds its national convention every two years instead of every four.