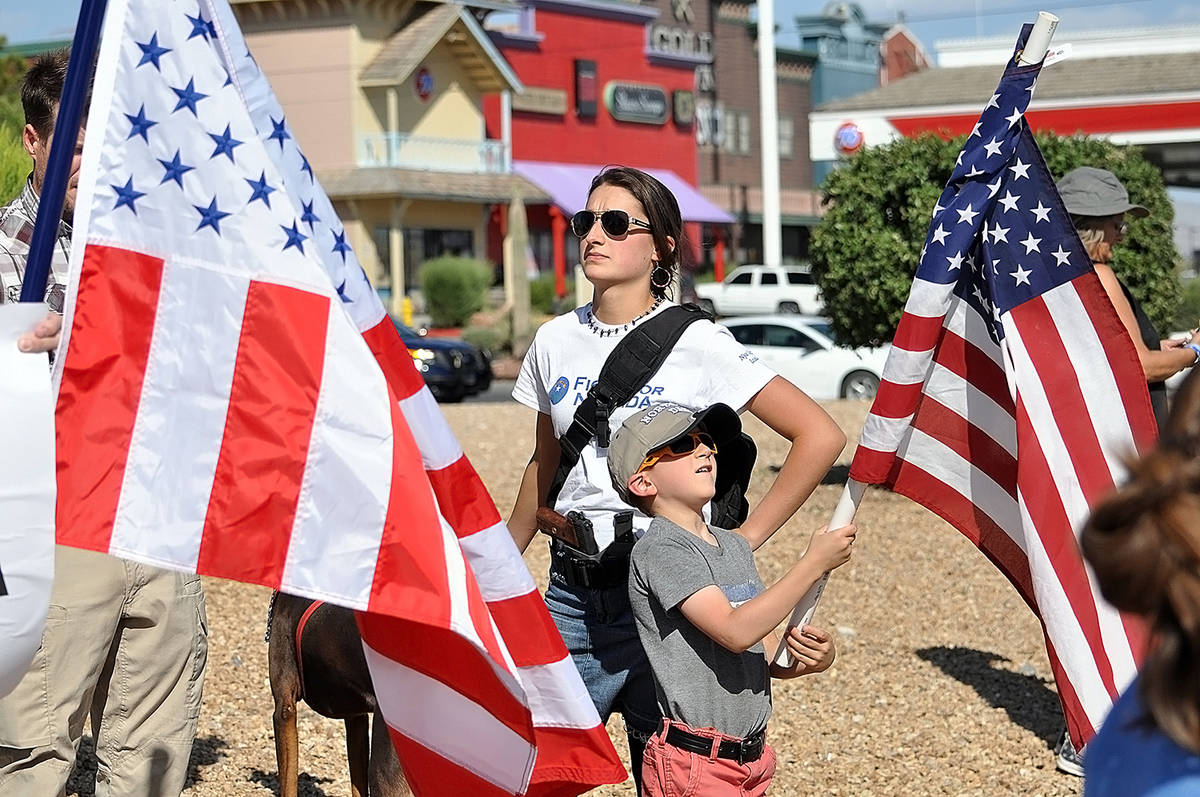 Horace Langford Jr./Pahrump Valley Times Many of those who attended the Monday, June 30 anti-mask rally inexplicably were carrying firearms. Upward of 60 individuals attended the 4:30 p.m. event, where social distancing was visibly nonexistent.

In the rural counties of Nevada, it is not uncommon to have residents assemble and express their conservative viewpoints. Here in Pahrump, during patriotic holidays like the Fourth of July, you might find someone standing along the main roadways waving an American flag to show their support for this country. It is also common to see American flags attached to residents’ cars and trucks around town. These residents are exercising their First Amendment rights.

The First Amendment states: “Congress shall make no law respecting an establishment of religion, or prohibiting the free exercise thereof; or abridging the freedom of speech, or of the press, or the right of the people peaceably to assemble, and to petition the Government for a redress of grievances.”

Freedom of speech is vital in a democracy. A democratic society is one that foresees the active participation of speech by citizens in the governance of the nation through their elected leaders. Thus, it becomes essential that people can freely express their views without any adverse consequences as a way of contributing their share to the growth and development of society. Freedom of society is necessary to preserve the underlying principles of democracy that vest power in the people. Where there is no freedom of speech, that society is not a democratic one.

The First Amendment does not protect all forms of speech from restrictions and censorship. The fact that one has the right to freedom of speech does not mean that you can make certain statements and not face the consequences as a result. Some forms of expression that exist as exceptions to the principle of freedom of are defamation, obscenity, perjury, treason, and incitement.

Incitement by certain political and social change groups is causing a lot of the current issues in America. Despite our right to freedom of speech, the First Amendment does not protect statements that urge others to resort to the use of force as a means of achieving a particular political or social objective. When in the course of a rally, when people are compelled, stirred up, or motivated to use violence to get what they want, such actions are likely to attract censorship and sanctions from the government. The First Amendment protects the recent peaceful demonstrations in support of Black Lives Matter, but not riots, looting and violence.

In the conservative areas of our great country, liberal or social groups, and their cause might not find agreement or empathy. But those conservative individuals recognize that those groups are allowed to express their views without government retaliation, so long as those views are expressed peacefully. It is this blending of different viewpoints that is fundamental to a democracy. However, the right to freedom of speech in a democracy can also be counterproductive. When one abuses the right to freedom of speech, the cases of hate speech are bound to be on the increase, especially in this era of fast-paced online communications where it becomes much easier to circulate content that is threatening and prejudicial against certain classes of persons.

People who are prepared to adopt violence to support their cause are more likely to report feelings of contempt for political adversaries whom they hold responsible for wrongdoing. Researchers have suggested the violence on our streets is rooted in a deep sense of despair and helplessness that things never change. Psychological research offers some support for this analysis. Where people don’t believe their appeals to authorities will be heard, protesters may be more likely to adopt violent methods of protest. Under these circumstances, people think they have “nothing to lose.” But the violent protests are not what was envisioned by the founders of our country to enact change. Instead, the process of voting and electing candidates that support your cause is fundamental to enacting change that reflects the modern United States.

The First Amendment gives us the right to express our views, and the ballot box puts those views into action.